The IUPAC system of nomenclature aims to ensure

When naming alkanes, a common error of beginning students is a failure to pick out the longest carbon chain. For example, the correct name for the compound shown below is 3‑methylheptane, not 2‑ethylhexane.

Remember that every substituent must have a number, and do not forget the prefixes: di, tri, tetra, etc.

Hydrocarbons having no double or triple bond functional groups are classified as alkanes or cycloalkanes, depending on whether the carbon atoms of the molecule are arranged only in chains or also in rings. Although these hydrocarbons have no functional groups, they constitute the framework on which functional groups are located in other classes of compounds, and provide an ideal starting point for studying and naming organic compounds. The alkanes and cycloalkanes are also members of a larger class of compounds referred to as aliphatic. Simply put, aliphatic compounds are compounds that do not incorporate any aromatic rings in their molecular structure.

The following table lists the IUPAC names assigned to simple continuous-chain alkanes from C-1 to C-10. A common “ane” suffix identifies these compounds as alkanes. Longer chain alkanes are well known, and their names may be found in many reference and text books. The names methane through decane should be memorized, since they constitute the root of many IUPAC names. Fortunately, common numerical prefixes are used in naming chains of five or more carbon atoms.

Some important behavior trends and terminologies

Beginning with butane (C4H10), and becoming more numerous with larger alkanes, we note the existence of alkane isomers. For example, there are five C6H14 isomers, shown below as abbreviated line formulas (A through E):

Although these distinct compounds all have the same molecular formula, only one (A) can be called hexane. How then are we to name the others?

For example, (CH3)2CHCH2CH2Br would be named 1-bromo-3-methylbutane. If the halogen is bonded to a simple alkyl group an alternative “alkyl halide” name may be used. Thus, C2H5Cl may be named chloroethane (no locator number is needed for a two carbon chain) or ethyl chloride.

The same concept can be applied to any of the straight chain alkane names provided in the table above.

Rule 3: In this example, there is no need to utilize the third rule. Because the two substitutes are identical, neither takes alphabetical precedence with respect to numbering the carbons. This concept will become clearer in the following examples.

The name of this molecule is thus: 2,5-dimethyloctane

The name of this molecule is thus: 2-chloro,6-bromoheptane

Rule #2: Carbons bonded to a functional group must have the lowest possible carbon number. After taking functional groups into consideration, any substitutes present must have the lowest possible carbon number. This particular example illustrates the point of difference principle. If we number the chain from the left, bromine, the methyl group and chlorine would occupy the second, fifth and sixth positions, respectively. This concept is illustrated in the second drawing below. If we number the chain from the right, chlorine, the methyl group and bromine would occupy the second, third and sixth positions, respectively, which is illustrated in the first drawing below. The position of the methyl, therefore, becomes a point of difference. In the first drawing, the methyl occupies the third position. In the second drawing, the methyl occupies the fifth position. To satisfy the second rule, we want to choose the numbering scheme that provides the lowest possible numbering of this substitute. Therefore, the first of the two carbon chains shown below is correct.

Therefore, the first numbering scheme is the appropriate one to use.

Once you have determined the correct numbering of the carbons, it is often useful to make a list, including the functional groups, substitutes, and the name of the parent chain.

The name of this molecule is thus: 6-bromo-2-chloro-3-methylheptane

Are the following structures properly named, and if they are not, what is the correct naming?

Give the name of the following molecules: 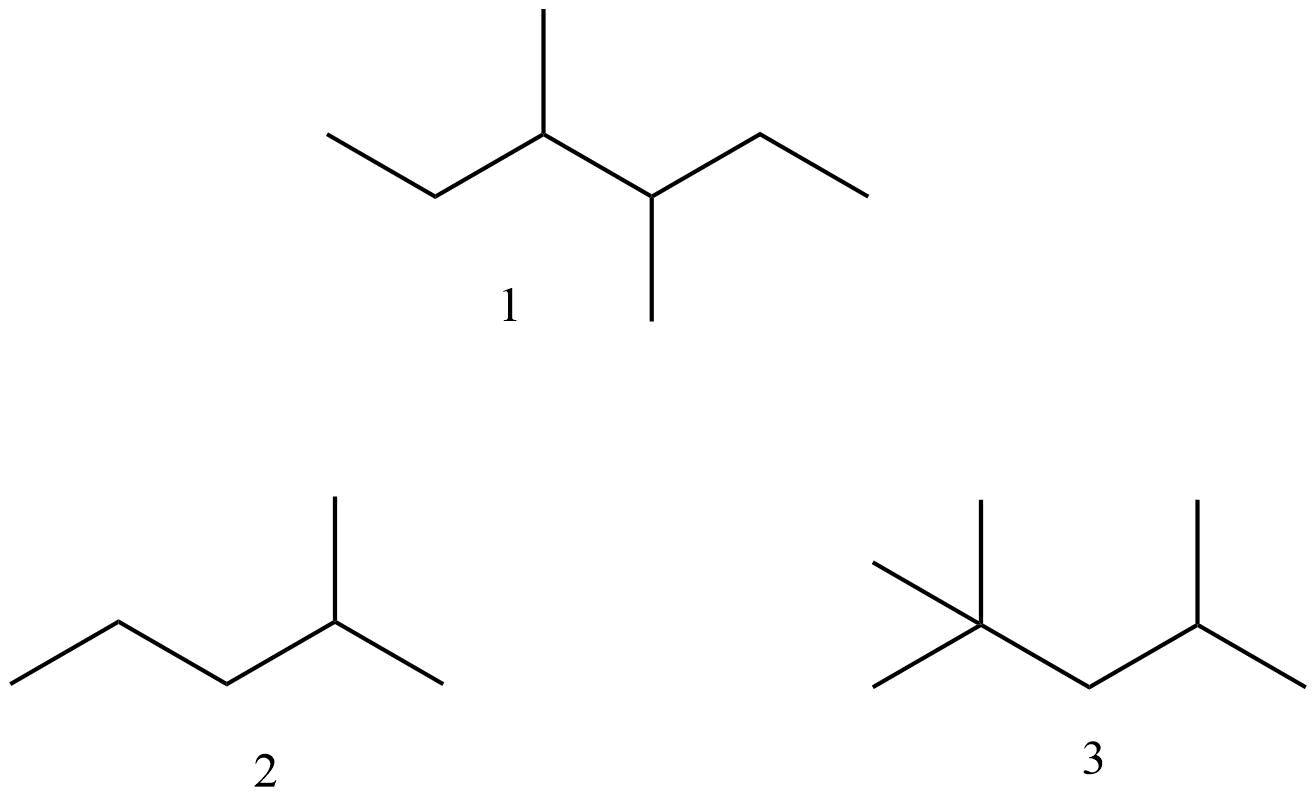 1. They are both labeled incorrectly: