The Lindlar catalyst allows a chemist to reduce a triple bond in the presence of a double bond.

Reactions between alkynes and catalysts are a common source of alkene formation. Because alkynes differ from alkenes on account of their two procurable π bonds, alkynes are more susceptible to additions. Aside from turning them into alkenes, these catalysts affect the arrangement of substituents on the newly formed alkene molecule. Depending on which catalyst is used, the catalysts cause anti- or syn-addition of hydrogens. Alkynes can readily undergo additions because of their availability of two π bonds.

Hydrogenation of an Alkyne

Alkynes can be fully hydrogenated into alkanes with the help of a platinum catalyst. However, the use of two other catalysts can be used to hydrogenate alkynes to alkanes. These catalysts are: Palladium dispersed on carbon (Pd/C) and finely dispersed nickel (Raney-Ni).

Hydrogenation of an Alkyne to a Cis-Alkene

Like alkenes, alkynes readily undergo catalytic hydrogenation, either to cis or trans alkenes, or to alkanes, depending on the reaction employed. 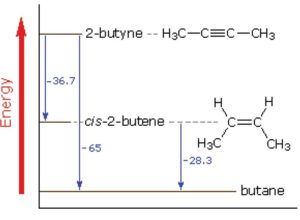 The catalytic addition of hydrogen to 2-butyne provides heat of reaction data that reflect the relative thermodynamic stabilities of these hydrocarbons, as shown in the diagram to the right. From the heats of hydrogenation, shown in blue in units of kcal/mole, it would appear that alkynes are thermodynamically less stable than alkenes to a greater degree than alkenes are less stable than alkanes. The standard bond energies for carbon-carbon bonds confirm this conclusion. Thus, a double bond is stronger than a single bond, but not twice as strong. The difference ( 63 kcal/mole ) may be regarded as the strength of the π-bond component. Similarly, a triple bond is stronger than a double bond, but not 50% stronger. Here the difference ( 54 kcal/mole ) may be taken as the strength of the second π-bond. The 9 kcal/mole weakening of this second π-bond is reflected in the heat of hydrogenation numbers ( 36.7 – 28.3 = 8.4 ).

Since alkynes are thermodynamically less stable than alkenes, we might expect addition reactions of the former to be more exothermic and relatively faster than equivalent reactions of the latter. In the case of catalytic hydrogenation, the usual Pt and Pd hydrogenation catalysts are so effective in promoting addition of hydrogen to both double and triple carbon-carbon bonds that the alkene intermediate formed by hydrogen addition to an alkyne cannot be isolated. A less efficient catalyst, Lindlar’s catalyst, prepared by deactivating (or poisoning) a conventional palladium catalyst by treating it with lead acetate and quinoline, permits alkynes to be converted to alkenes without further reduction to an alkane.

Hydrogenation of an Alkyne to a Trans-Alkene Usng any alkyne how would you prepare the following compounds: 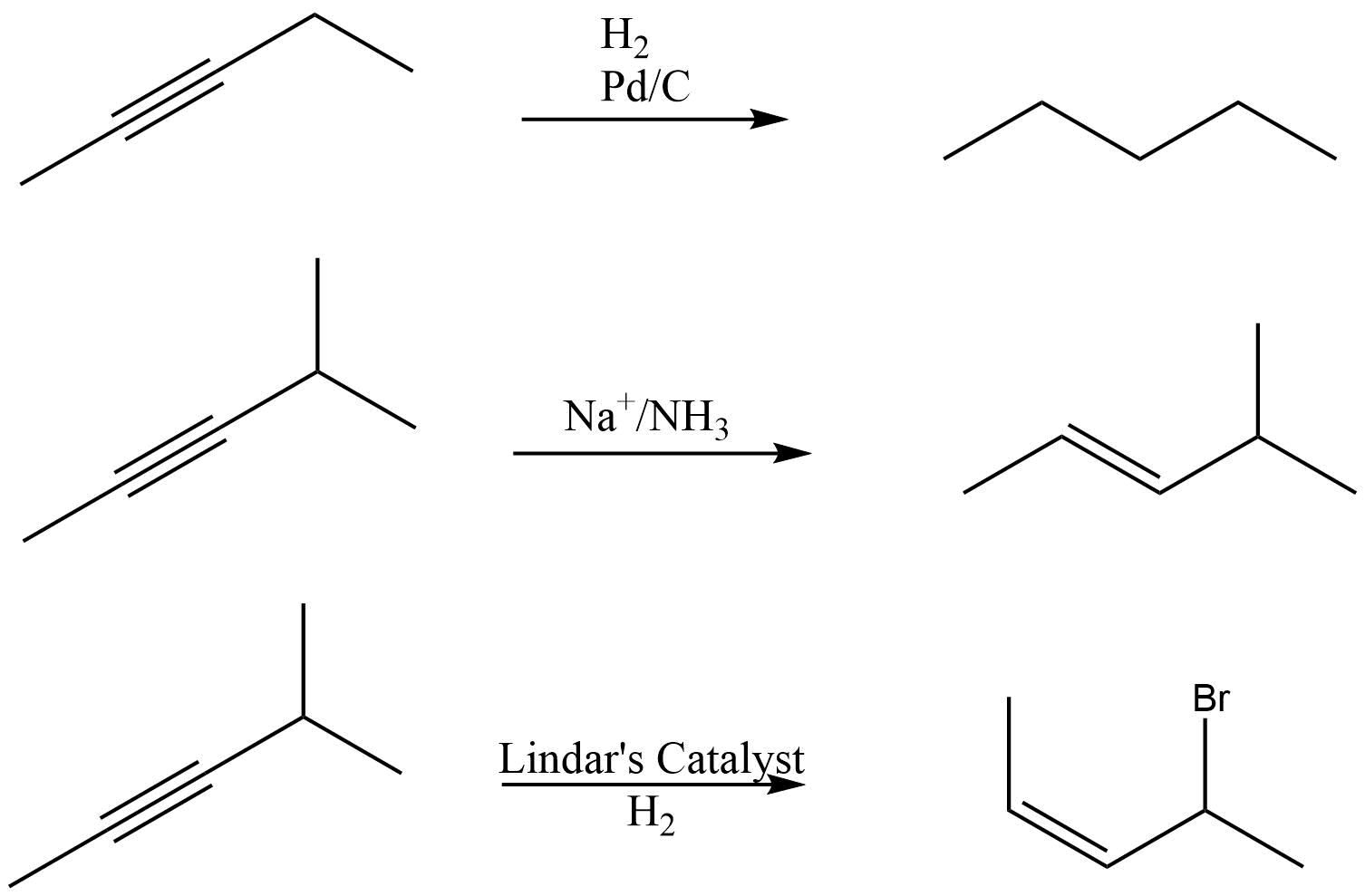