Rapid interconversion between tautomers is called tautomerism; however, as the two tautomers are in equilibrium, the term tautomeric equilibrium may be used. This section demonstrates the equilibrium between a ketone and an enol; hence, the term keto–enol tautomeric equilibrium is appropriate. The term “enol” indicates the presence of a carbon-carbon double bond and a hydroxyl (i.e., alcohol) group. Later in the course, you will see the importance of keto-enol tautomerism in discussions of the reactions of ketones, carbohydrates and nucleic acids.

It is important to note that tautomerism is not restricted to keto-enol systems. Other examples include imine-enamine tautomerism

However, at the moment you need only concern yourself with keto-enol tautomerism.

Notice how hydroboration complements hydration in the chemistry of both alkenes and alkynes.

As with alkenes,hydration (addition of water) to alkynes requires a strong acid, usually sulfuric acid, and is facilitated by mercuric sulfate. However, unlike the additions to double bonds which give alcohol products, addition of water to alkynes gives ketone products ( except for acetylene which yields acetaldehyde ). The explanation for this deviation lies in enol-keto tautomerization, illustrated by the following equation. The initial product from the addition of water to an alkyne is an enol (a compound having a hydroxyl substituent attached to a double-bond), and this immediately rearranges to the more stable keto tautomer.

Tautomers are defined as rapidly interconverted constitutional isomers, usually distinguished by a different bonding location for a labile hydrogen atom (colored red here) and a differently located double bond. The equilibrium between tautomers is not only rapid under normal conditions, but it often strongly favors one of the isomers ( acetone, for example, is 99.999% keto tautomer ). Even in such one-sided equilibria, evidence for the presence of the minor tautomer comes from the chemical behavior of the compound. Tautomeric equilibria are catalyzed by traces of acids or bases that are generally present in most chemical samples. The three examples shown below illustrate these reactions for different substitutions of the triple-bond. The tautomerization step is indicated by a red arrow. For terminal alkynes the addition of water follows the Markovnikov rule, as in the second example below, and the final product ia a methyl ketone ( except for acetylene, shown in the first example ). For internal alkynes ( the triple-bond is within a longer chain ) the addition of water is not regioselective. If the triple-bond is not symmetrically located ( i.e. if R & R’ in the third equation are not the same ) two isomeric ketones will be formed.

With the addition of water, alkynes can be hydrated to form enols that spontaneously tautomerize to ketones. Reaction is catalyzed by mercury ions. Follows Markovnikov’s Rule: Terminal alkynes give methyl ketones

Just as described in Figure 7 the π electrons will attack a proton, forming a carbocation, which then gets attacked by the nucleophilic water molecules.  After deprotination, we generate an enol, which then tautomerizes into the ketone form shown. As you can see here, the π electrons of the triple bond are attacking the proton, which forms a covalent bond on the carbon with the most hydrogen substituents. Once the hydrogen is bound you have a carbocation, which gets attacked by the water molecule. Now you have a positive charge on the oxygen which results in a base coming in and deprotinating the molecule. Once deprotinated, you have an enol, which then gets tautomerized.

Tautomerism is shown here when the proton gets attacked by the double bond π electrons forming a covalent bond between the carbon and the hydrogen on the less substituted carbon. Electrons from the Oxygen end up moving to the carbon, forming a double bond with carbon and giving itself a positive charge, which then gets attacked by the base. The base deprotinates the Oxygen resulting in the more stable final product at equilibrium, which is a ketone.

What alkyne would you start with to gain the following products, in an oxidation reaction? Keep in mind resonance.

Propose a reaction scheme for the following compound starting from the alkyne and showing required reagents and intermediates. 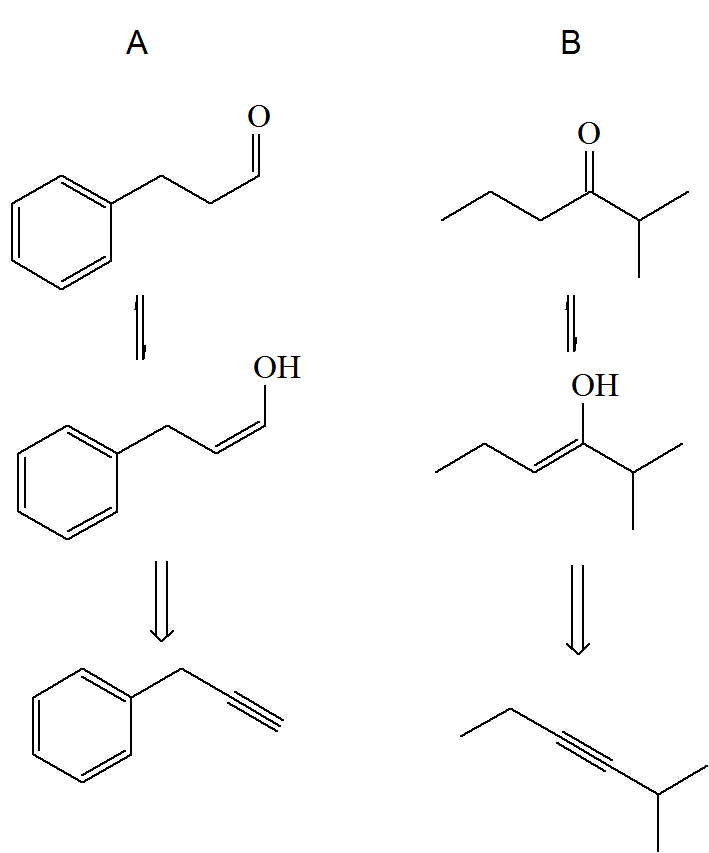