The Nitration and Sulfonation of Benzene

Nitration and sulfonation of benzene are two examples of electrophilic aromatic substitution. The nitronium ion (NO2+) and sulfur trioxide (SO3) are the electrophiles and individually react with benzene to give nitrobenzene and benzenesulfonic acid respectively.

The source of the nitronium ion is through the protonation of nitric acid by sulfuric acid, which causes the loss of a water molecule and formation of a nitronium ion.

The first step in the nitration of benzene is to activate HNO3with sulfuric acid to produce a stronger electrophile, the nitronium ion.

Because the nitronium ion is a good electrophile, it is attacked by benzene to produce Nitrobenzene.

Sulfonation of benzene is a reversible reaction. Sulfur trioxide readily reacts with water to produce sulfuric acid and heat. Therefore, by adding heat to benzenesulfonic acid in diluted aqueous sulfuric acid the reaction is reversed.

Further Applications of Nitration and Sulfonation

Nitration is used to add nitrogen to a benzene ring, which can be used further in substitution reactions. The nitro group acts as a ring deactivator. Having nitrogen present in a ring is very useful because it can be used as a directing group as well as a masked amino group. The products of aromatic nitrations are very important intermediates in industrial chemistry.

Because sulfonation is a reversible reaction, it can also be used in further substitution reactions in the form of a directing blocking group because it can be easily removed. The sulfonic group blocks the carbon from being attacked by other substituents and after the reaction is completed it can be removed by reverse sulfonation. Benzenesulfonic acids are also used in the synthesis of detergents, dyes, and sulfa drugs. Bezenesulfonyl Chloride is a precursor to sulfonamides, which are used in chemotherapy.

1. What is/are the required reagent(s)for the following reaction:

2. What is the product of the following reaction:

3. Why is it important that the nitration of benzene by nitric acid occurs in sulfuric acid?

4. Write a detailed mechanism for the sulfonation of benzene, including all resonance forms.

5. Draw an energy diagram for the nitration of benzene. Draw the intermediates, starting materials, and products. Label the transition states. (For questions 1 and 2 see Electrophilic Aromatic Substitution for hints)

Show Answer
SO3 and H2SO4 (fuming) 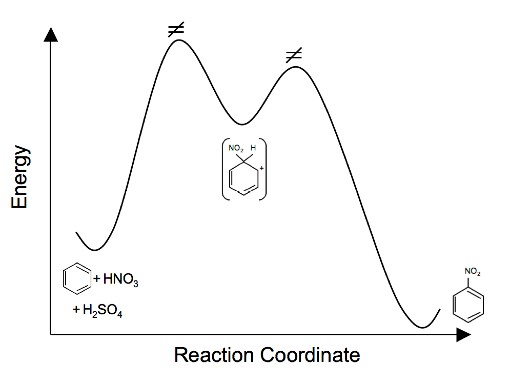