Magnesium is an electrolyte, but that is not considered its major function in the body. Green leafy vegetables, beans, nuts, seeds, and whole grains are good sources of magnesium1,2. 40-60% of consumed magnesium is absorbed at normal levels of intake. Magnesium is excreted primarily in urine3.

Magnesium helps to stabilize ATP and nucleotides by binding to phosphate groups. Magnesium plays a role in over 300 enzymes in the body. Here is a list of some of the physiological processes that magnesium participates in3:

Magnesium deficiency is rare, but can be caused by prolonged diarrhea or vomiting. Symptoms include1:

Magnesium toxicity is also rare but can occur from excessive use of antacids or laxatives. Symptoms include3:

Magnesium supplements differ in percent of magnesium in the different forms, as shown below. 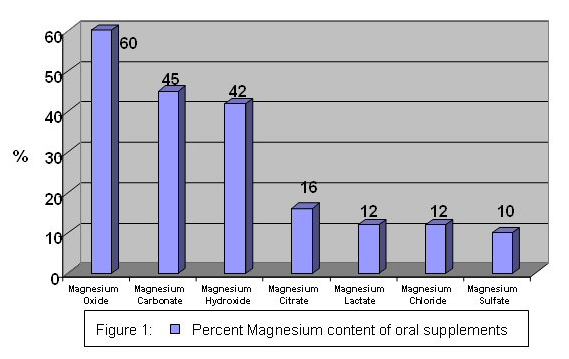 The bioavailability of magnesium oxide is significantly lower than magnesium chloride, magnesium lactate, and magnesium aspartate. The latter 3 are equally bioavailable4.