When you’re in motion, the basic questions to ask are: Where are you? Where are you going? How fast are you getting there? The answers to these questions require that you specify your position, your displacement, and your average velocity—the terms we define in this section. 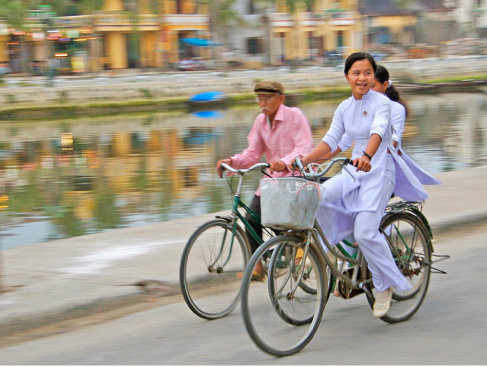 If an object moves relative to a frame of reference—for example, if a professor moves to the right relative to a whiteboard (Figure)—then the object’s position changes. This change in position is called displacement. The word displacement implies that an object has moved, or has been displaced. Although position is the numerical value of x along a straight line where an object might be located, displacement gives the change in position along this line. Since displacement indicates direction, it is a vector and can be either positive or negative, depending on the choice of positive direction. Also, an analysis of motion can have many displacements embedded in it. If right is positive and an object moves 2 m to the right, then 4 m to the left, the individual displacements are 2 m and [latex] -4 [/latex] m, respectively. 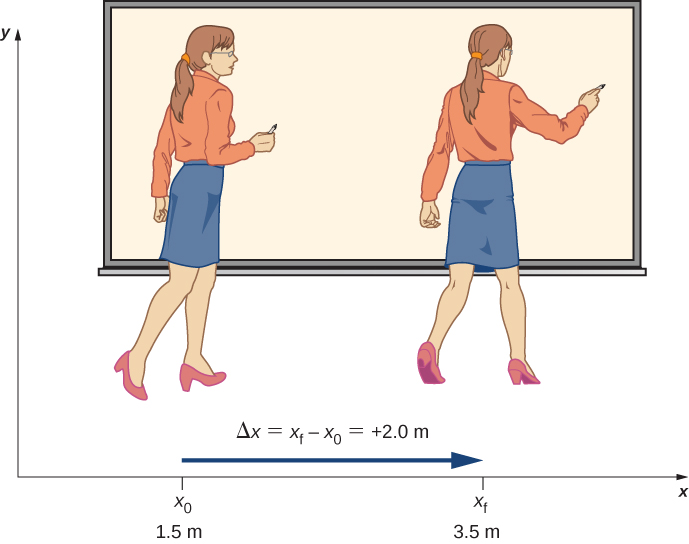 Displacement [latex] \text{Δ}x [/latex] is the change in position of an object:

We use the uppercase Greek letter delta (Δ) to mean “change in” whatever quantity follows it; thus, [latex] \text{Δ}x [/latex] means change in position (final position less initial position). We always solve for displacement by subtracting initial position [latex] {x}_{0} [/latex] from final position [latex] {x}_{\text{f}} [/latex]. Note that the SI unit for displacement is the meter, but sometimes we use kilometers or other units of length. Keep in mind that when units other than meters are used in a problem, you may need to convert them to meters to complete the calculation (see Conversion Factors).

where [latex] \text{Δ}{x}_{i} [/latex] are the individual displacements. In the earlier example,

To calculate the other physical quantities in kinematics we must introduce the time variable. The time variable allows us not only to state where the object is (its position) during its motion, but also how fast it is moving. How fast an object is moving is given by the rate at which the position changes with time.

For each position [latex] {x}_{\text{i}} [/latex], we assign a particular time [latex] {t}_{\text{i}} [/latex]. If the details of the motion at each instant are not important, the rate is usually expressed as the average velocity [latex] \overset{\text{–}}{v} [/latex]. This vector quantity is simply the total displacement between two points divided by the time taken to travel between them. The time taken to travel between two points is called the elapsed time [latex] \text{Δ}t [/latex].

Jill sets out from her home to deliver flyers for her yard sale, traveling due east along her street lined with houses. At [latex] 0.5 [/latex] km and 9 minutes later she runs out of flyers and has to retrace her steps back to her house to get more. This takes an additional 9 minutes. After picking up more flyers, she sets out again on the same path, continuing where she left off, and ends up 1.0 km from her house. This third leg of her trip takes [latex] 15 [/latex] minutes. At this point she turns back toward her house, heading west. After [latex] 1.75 [/latex] km and [latex] 25 [/latex] minutes she stops to rest.

A sketch of Jill’s movements is shown in (Figure).

The problem contains data on the various legs of Jill’s trip, so it would be useful to make a table of the physical quantities. We are given position and time in the wording of the problem so we can calculate the displacements and the elapsed time. We take east to be the positive direction. From this information we can find the total displacement and average velocity. Jill’s home is the starting point [latex] {x}_{0} [/latex]. The following table gives Jill’s time and position in the first two columns, and the displacements are calculated in the third column.

Jill’s total displacement is −0.75 km, which means at the end of her trip she ends up [latex] 0.75\,\text{km} [/latex] due west of her home. The average velocity means if someone was to walk due west at [latex] 0.013 [/latex] km/min starting at the same time Jill left her home, they both would arrive at the final stopping point at the same time. Note that if Jill were to end her trip at her house, her total displacement would be zero, as well as her average velocity. The total distance traveled during the 58 minutes of elapsed time for her trip is 3.75 km.

Give an example in which there are clear distinctions among distance traveled, displacement, and magnitude of displacement. Identify each quantity in your example specifically.

You drive your car into town and return to drive past your house to a friend’s house.

Bacteria move back and forth using their flagella (structures that look like little tails). Speeds of up to 50 μm/s (50 × 10−6 m/s) have been observed. The total distance traveled by a bacterium is large for its size, whereas its displacement is small. Why is this?

If the bacteria are moving back and forth, then the displacements are canceling each other and the final displacement is small.

Give an example of a device used to measure time and identify what change in that device indicates a change in time.

Does a car’s odometer measure distance traveled or displacement?

During a given time interval the average velocity of an object is zero. What can you say conclude about its displacement over the time interval?

Consider a coordinate system in which the positive x axis is directed upward vertically. What are the positions of a particle (a) 5.0 m directly above the origin and (b) 2.0 m below the origin?

A car is 2.0 km west of a traffic light at t = 0 and 5.0 km east of the light at t = 6.0 min. Assume the origin of the coordinate system is the light and the positive x direction is eastward. (a) What are the car’s position vectors at these two times? (b) What is the car’s displacement between 0 min and 6.0 min?

The Shanghai maglev train connects Longyang Road to Pudong International Airport, a distance of 30 km. The journey takes 8 minutes on average. What is the maglev train’s average velocity?

A cyclist rides 8.0 km east for 20 minutes, then he turns and heads west for 8 minutes and 3.2 km. Finally, he rides east for 16 km, which takes 40 minutes. (a) What is the final displacement of the cyclist? (b) What is his average velocity?

On February 15, 2013, a superbolide meteor (brighter than the Sun) entered Earth’s atmosphere over Chelyabinsk, Russia, and exploded at an altitude of 23.5 km. Eyewitnesses could feel the intense heat from the fireball, and the blast wave from the explosion blew out windows in buildings. The blast wave took approximately 2 minutes 30 seconds to reach ground level. (a) What was the average velocity of the blast wave? b) Compare this with the speed of sound, which is 343 m/s at sea level.

displacement
the change in position of an object

kinematics
the description of motion through properties such as position, time, velocity, and acceleration

position
the location of an object at a particular time