The importance of understanding acceleration spans our day-to-day experience, as well as the vast reaches of outer space and the tiny world of subatomic physics. In everyday conversation, to accelerate means to speed up; applying the brake pedal causes a vehicle to slow down. We are familiar with the acceleration of our car, for example. The greater the acceleration, the greater the change in velocity over a given time. Acceleration is widely seen in experimental physics. In linear particle accelerator experiments, for example, subatomic particles are accelerated to very high velocities in collision experiments, which tell us information about the structure of the subatomic world as well as the origin of the universe. In space, cosmic rays are subatomic particles that have been accelerated to very high energies in supernovas (exploding massive stars) and active galactic nuclei. It is important to understand the processes that accelerate cosmic rays because these rays contain highly penetrating radiation that can damage electronics flown on spacecraft, for example.

The formal definition of acceleration is consistent with these notions just described, but is more inclusive.

Average acceleration is the rate at which velocity changes: 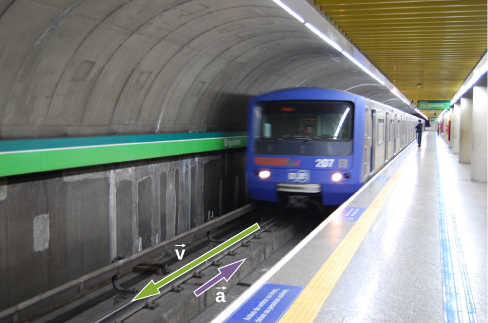 Figure 3.10 A subway train in Sao Paulo, Brazil, decelerates as it comes into a station. It is accelerating in a direction opposite to its direction of motion. (credit: Yusuke Kawasaki)

If an object in motion has a velocity in the positive direction with respect to a chosen origin and it acquires a constant negative acceleration, the object eventually comes to a rest and reverses direction. If we wait long enough, the object passes through the origin going in the opposite direction. This is illustrated in (Figure).

Figure 3.11 An object in motion with a velocity vector toward the east under negative acceleration comes to a rest and reverses direction. It passes the origin going in the opposite direction after a long enough time. 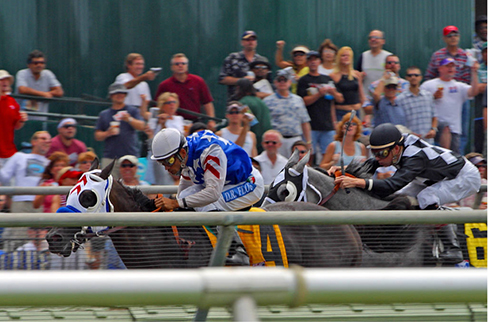 Figure 3.12 Racehorses accelerating out of the gate. (credit: Jon Sullivan)

First we draw a sketch and assign a coordinate system to the problem (Figure). This is a simple problem, but it always helps to visualize it. Notice that we assign east as positive and west as negative. Thus, in this case, we have negative velocity.

Figure 3.13 Identify the coordinate system, the given information, and what you want to determine.

The negative sign for acceleration indicates that acceleration is toward the west. An acceleration of 8.33 m/s2 due west means the horse increases its velocity by 8.33 m/s due west each second; that is, 8.33 meters per second per second, which we write as 8.33 m/s2. This is truly an average acceleration, because the ride is not smooth. We see later that an acceleration of this magnitude would require the rider to hang on with a force nearly equal to his weight.

Inserting the knowns, we have

To illustrate this concept, let’s look at two examples. First, a simple example is shown using (Figure)(b), the velocity-versus-time graph of (Figure), to find acceleration graphically. This graph is depicted in (Figure)(a), which is a straight line. The corresponding graph of acceleration versus time is found from the slope of velocity and is shown in (Figure)(b). In this example, the velocity function is a straight line with a constant slope, thus acceleration is a constant. In the next example, the velocity function has a more complicated functional dependence on time.

Figure 3.15 (a, b) The velocity-versus-time graph is linear and has a negative constant slope (a) that is equal to acceleration, shown in (b).

If we know the functional form of velocity, v(t), we can calculate instantaneous acceleration a(t) at any time point in the motion using (Figure).

At t = 2 s, velocity has increased to[latex] v(2\,\text{s)}=20\,\text{m/s} [/latex], where it is maximum, which corresponds to the time when the acceleration is zero. We see that the maximum velocity occurs when the slope of the velocity function is zero, which is just the zero of the acceleration function.

At t = 5 s, velocity is [latex] v(5\,\text{s)}=-25\,\text{m/s} [/latex] and acceleration is increasingly negative. Between the times t = 3 s and t = 5 s the particle has decreased its velocity to zero and then become negative, thus reversing its direction. The particle is now speeding up again, but in the opposite direction.

We can see these results graphically in (Figure). 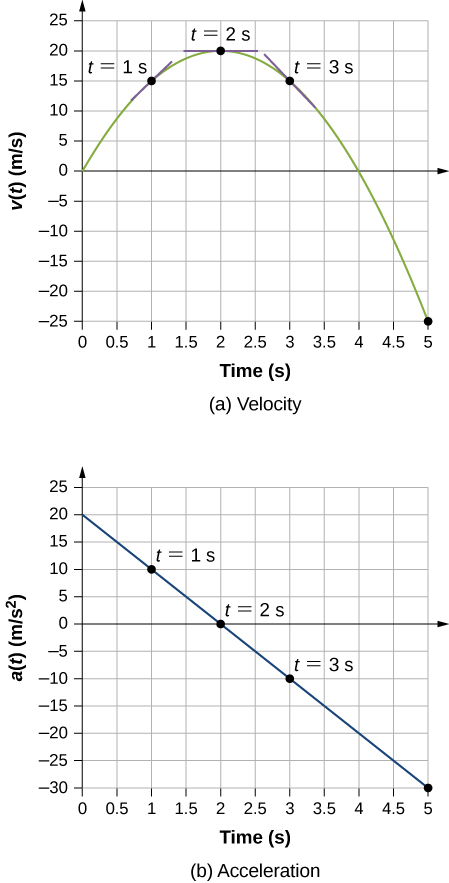 By doing both a numerical and graphical analysis of velocity and acceleration of the particle, we can learn much about its motion. The numerical analysis complements the graphical analysis in giving a total view of the motion. The zero of the acceleration function corresponds to the maximum of the velocity in this example. Also in this example, when acceleration is positive and in the same direction as velocity, velocity increases. As acceleration tends toward zero, eventually becoming negative, the velocity reaches a maximum, after which it starts decreasing. If we wait long enough, velocity also becomes negative, indicating a reversal of direction. A real-world example of this type of motion is a car with a velocity that is increasing to a maximum, after which it starts slowing down, comes to a stop, then reverses direction.

If we take east to be positive, then the airplane has negative acceleration because it is accelerating toward the west. It is also decelerating; its acceleration is opposite in direction to its velocity.

Getting a Feel for Acceleration

You are probably used to experiencing acceleration when you step into an elevator, or step on the gas pedal in your car. However, acceleration is happening to many other objects in our universe with which we don’t have direct contact. (Figure) presents the acceleration of various objects. We can see the magnitudes of the accelerations extend over many orders of magnitude.

Figure 3.17 Graphs of instantaneous acceleration versus time for two different one-dimensional motions. (a) Acceleration varies only slightly and is always in the same direction, since it is positive. The average over the interval is nearly the same as the acceleration at any given time. (b) Acceleration varies greatly, perhaps representing a package on a post office conveyor belt that is accelerated forward and backward as it bumps along. It is necessary to consider small time intervals (such as from 0–1.0 s) with constant or nearly constant acceleration in such a situation.

Is it possible for speed to be constant while acceleration is not zero?

No, in one dimension constant speed requires zero acceleration.

Is it possible for velocity to be constant while acceleration is not zero? Explain.

Give an example in which velocity is zero yet acceleration is not.

A ball is thrown into the air and its velocity is zero at the apex of the throw, but acceleration is not zero.

If a subway train is moving to the left (has a negative velocity) and then comes to a stop, what is the direction of its acceleration? Is the acceleration positive or negative?

Plus and minus signs are used in one-dimensional motion to indicate direction. What is the sign of an acceleration that reduces the magnitude of a negative velocity? Of a positive velocity? 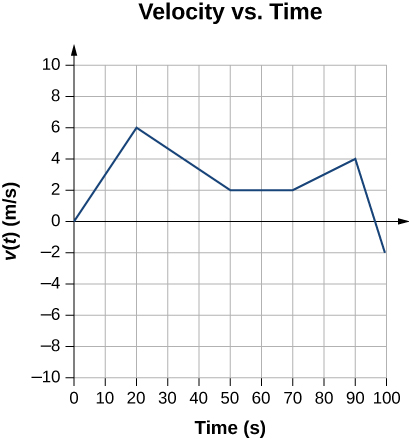 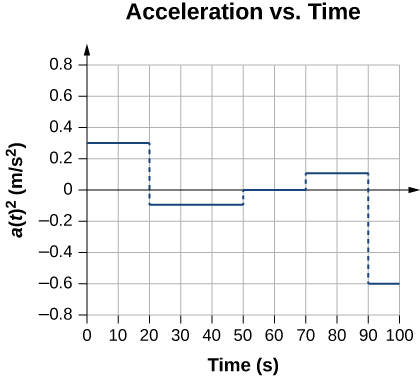 Assume an intercontinental ballistic missile goes from rest to a suborbital speed of 6.50 km/s in 60.0 s (the actual speed and time are classified). What is its average acceleration in meters per second and in multiples of g (9.80 m/s2)?

An airplane, starting from rest, moves down the runway at constant acceleration for 18 s and then takes off at a speed of 60 m/s. What is the average acceleration of the plane?