4 Motion in Two and Three Dimensions

Displacement and velocity in two or three dimensions are straightforward extensions of the one-dimensional definitions. However, now they are vector quantities, so calculations with them have to follow the rules of vector algebra, not scalar algebra.

(Figure) shows the coordinate system and the vector to point P, where a particle could be located at a particular time t. Note the orientation of the x, y, and z axes. This orientation is called a right-handed coordinate system (Coordinate Systems and Components of a Vector) and it is used throughout the chapter. 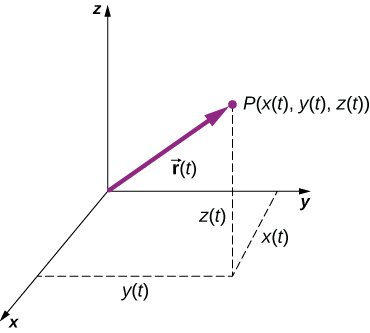 Figure 4.2 A three-dimensional coordinate system with a particle at position P(x(t), y(t), z(t)).

Vector addition is discussed in Vectors. Note that this is the same operation we did in one dimension, but now the vectors are in three-dimensional space. 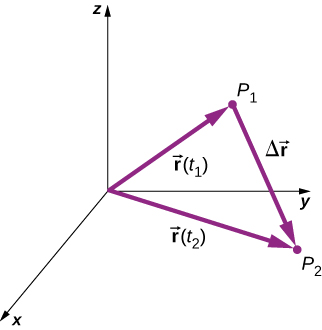 The following examples illustrate the concept of displacement in multiple dimensions.

A satellite is in a circular polar orbit around Earth at an altitude of 400 km—meaning, it passes directly overhead at the North and South Poles. What is the magnitude and direction of the displacement vector from when it is directly over the North Pole to when it is at [latex] -45\text{°} [/latex] latitude?

Show Answer
(Figure) shows the surface of Earth and a circle that represents the orbit of the satellite. Although satellites are moving in three-dimensional space, they follow trajectories of ellipses, which can be graphed in two dimensions. The position vectors are drawn from the center of Earth, which we take to be the origin of the coordinate system, with the y-axis as north and the x-axis as east. The vector between them is the displacement of the satellite. We take the radius of Earth as 6370 km, so the length of each position vector is 6770 km. 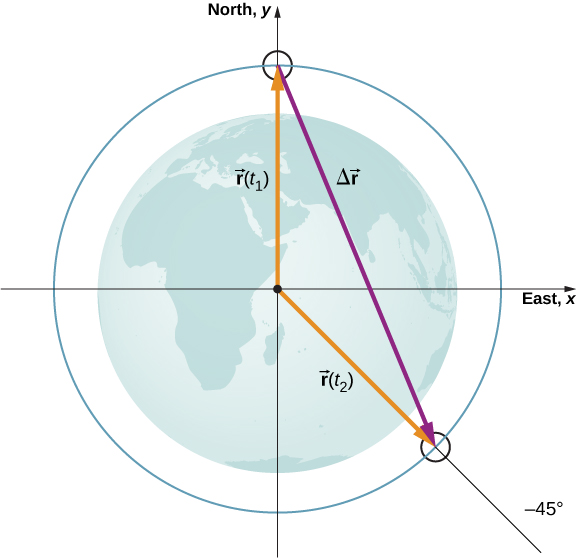 Figure 4.4 Two position vectors are drawn from the center of Earth, which is the origin of the coordinate system, with the y-axis as north and the x-axis as east. The vector between them is the displacement of the satellite.

In unit vector notation, the position vectors are

Evaluating the sine and cosine, we have

Now we can find [latex] \text{Δ}\overset{\to }{r} [/latex], the displacement of the satellite: 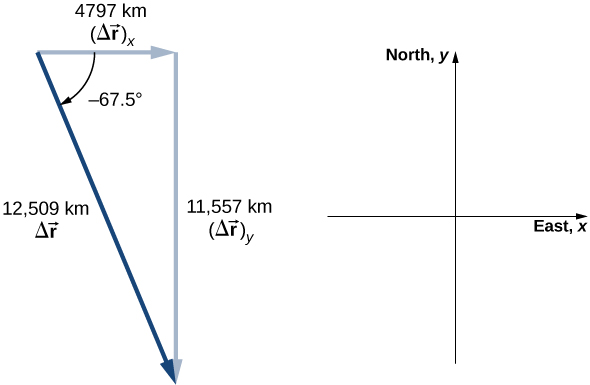 Note that the satellite took a curved path along its circular orbit to get from its initial position to its final position in this example. It also could have traveled 4787 km east, then 11,557 km south to arrive at the same location. Both of these paths are longer than the length of the displacement vector. In fact, the displacement vector gives the shortest path between two points in one, two, or three dimensions.

Many applications in physics can have a series of displacements, as discussed in the previous chapter. The total displacement is the sum of the individual displacements, only this time, we need to be careful, because we are adding vectors. We illustrate this concept with an example of Brownian motion.

Brownian motion is a chaotic random motion of particles suspended in a fluid, resulting from collisions with the molecules of the fluid. This motion is three-dimensional. The displacements in numerical order of a particle undergoing Brownian motion could look like the following, in micrometers ((Figure)):

What is the total displacement of the particle from the origin? 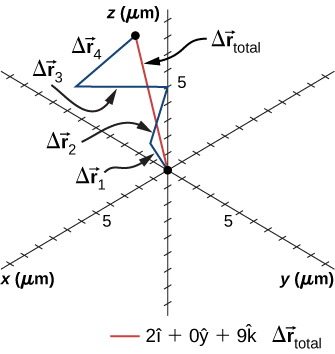 Figure 4.6 Trajectory of a particle undergoing random displacements of Brownian motion. The total displacement is shown in red.

Show Answer
We form the sum of the displacements and add them as vectors:

Let’s look at the relative orientation of the position vector and velocity vector graphically. In (Figure) we show the vectors [latex] \overset{\to }{r}(t) [/latex] and [latex] \overset{\to }{r}(t+\text{Δ}t), [/latex] which give the position of a particle moving along a path represented by the gray line. As [latex] \text{Δ}t [/latex] goes to zero, the velocity vector, given by (Figure), becomes tangent to the path of the particle at time t. 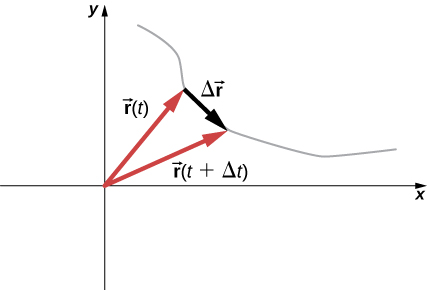 Figure 4.7 A particle moves along a path given by the gray line. In the limit as [latex] \text{Δ}t [/latex] approaches zero, the velocity vector becomes tangent to the path of the particle.

(Equation) can also be written in terms of the components of [latex] \overset{\to }{v}(t). [/latex] Since

Using (Figure) and (Figure), and taking the derivative of the position function with respect to time, we find

When we look at the three-dimensional equations for position and velocity written in unit vector notation, (Figure) and (Figure), we see the components of these equations are separate and unique functions of time that do not depend on one another. Motion along the x direction has no part of its motion along the y and z directions, and similarly for the other two coordinate axes. Thus, the motion of an object in two or three dimensions can be divided into separate, independent motions along the perpendicular axes of the coordinate system in which the motion takes place.

To illustrate this concept with respect to displacement, consider a woman walking from point A to point B in a city with square blocks. The woman taking the path from A to B may walk east for so many blocks and then north (two perpendicular directions) for another set of blocks to arrive at B. How far she walks east is affected only by her motion eastward. Similarly, how far she walks north is affected only by her motion northward.

An example illustrating the independence of vertical and horizontal motions is given by two baseballs. One baseball is dropped from rest. At the same instant, another is thrown horizontally from the same height and it follows a curved path. A stroboscope captures the positions of the balls at fixed time intervals as they fall ((Figure)). 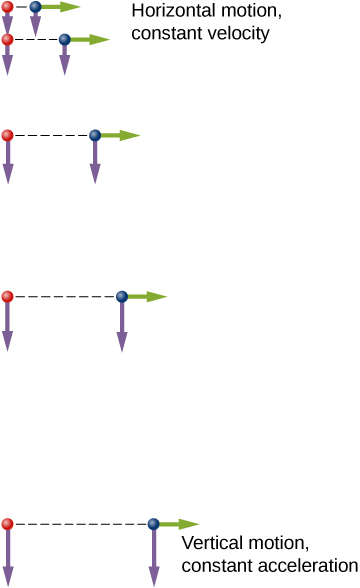 It is remarkable that for each flash of the strobe, the vertical positions of the two balls are the same. This similarity implies vertical motion is independent of whether the ball is moving horizontally. (Assuming no air resistance, the vertical motion of a falling object is influenced by gravity only, not by any horizontal forces.) Careful examination of the ball thrown horizontally shows it travels the same horizontal distance between flashes. This is because there are no additional forces on the ball in the horizontal direction after it is thrown. This result means horizontal velocity is constant and is affected neither by vertical motion nor by gravity (which is vertical). Note this case is true for ideal conditions only. In the real world, air resistance affects the speed of the balls in both directions.

What form does the trajectory of a particle have if the distance from any point A to point B is equal to the magnitude of the displacement from A to B?

Give an example of a trajectory in two or three dimensions caused by independent perpendicular motions.

If the instantaneous velocity is zero, what can be said about the slope of the position function?

The slope must be zero because the velocity vector is tangent to the graph of the position function.

The coordinates of a particle in a rectangular coordinate system are (1.0, –4.0, 6.0). What is the position vector of the particle?

A bird flies straight northeast a distance of 95.0 km for 3.0 h. With the x-axis due east and the y-axis due north, what is the displacement in unit vector notation for the bird? What is the average velocity for the trip?

New York Rangers defenseman Daniel Girardi stands at the goal and passes a hockey puck 20 m and [latex] 45\text{°} [/latex] from straight down the ice to left wing Chris Kreider waiting at the blue line. Kreider waits for Girardi to reach the blue line and passes the puck directly across the ice to him 10 m away. What is the final displacement of the puck? See the following figure. 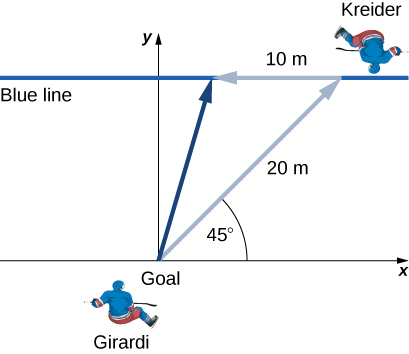 The F-35B Lighting II is a short-takeoff and vertical landing fighter jet. If it does a vertical takeoff to 20.00-m height above the ground and then follows a flight path angled at [latex] 30\text{°} [/latex] with respect to the ground for 20.00 km, what is the final displacement?

velocity vector
vector that gives the instantaneous speed and direction of a particle; tangent to the trajectory