The study of motion is called kinematics, but kinematics only describes the way objects move—their velocity and their acceleration. Dynamics is the study of how forces affect the motion of objects and systems. It considers the causes of motion of objects and systems of interest, where a system is anything being analyzed. The foundation of dynamics are the laws of motion stated by Isaac Newton (1642–1727). These laws provide an example of the breadth and simplicity of principles under which nature functions. They are also universal laws in that they apply to situations on Earth and in space.

Newton’s laws of motion were just one part of the monumental work that has made him legendary ((Figure)). The development of Newton’s laws marks the transition from the Renaissance to the modern era. Not until the advent of modern physics was it discovered that Newton’s laws produce a good description of motion only when the objects are moving at speeds much less than the speed of light and when those objects are larger than the size of most molecules (about [latex] {10}^{-9} [/latex] m in diameter). These constraints define the realm of Newtonian mechanics. At the beginning of the twentieth century, Albert Einstein (1879–1955) developed the theory of relativity and, along with many other scientists, quantum mechanics. Quantum mechanics does not have the constraints present in Newtonian physics. All of the situations we consider in this chapter, and all those preceding the introduction of relativity in Volume 3, Relativity, are in the realm of Newtonian physics. 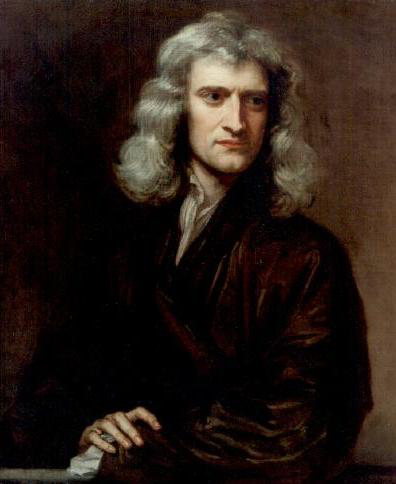 Figure 5.2 Isaac Newton (1642–1727) published his amazing work, Philosophiae Naturalis Principia Mathematica, in 1687. It proposed scientific laws that still apply today to describe the motion of objects (the laws of motion). Newton also discovered the law of gravity, invented calculus, and made great contributions to the theories of light and color.

Dynamics is the study of the forces that cause objects and systems to move. To understand this, we need a working definition of force. An intuitive definition of force—that is, a push or a pull—is a good place to start. We know that a push or a pull has both magnitude and direction (therefore, it is a vector quantity), so we can define force as the push or pull on an object with a specific magnitude and direction. Force can be represented by vectors or expressed as a multiple of a standard force.

The push or pull on an object can vary considerably in either magnitude or direction. For example, a cannon exerts a strong force on a cannonball that is launched into the air. In contrast, Earth exerts only a tiny downward pull on a flea. Our everyday experiences also give us a good idea of how multiple forces add. If two people push in different directions on a third person, as illustrated in (Figure), we might expect the total force to be in the direction shown. Since force is a vector, it adds just like other vectors. Forces, like other vectors, are represented by arrows and can be added using the familiar head-to-tail method or trigonometric methods. These ideas were developed in Vectors. 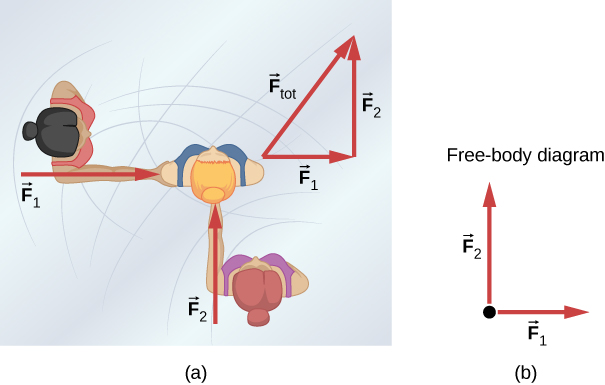 Free-body diagrams are useful in analyzing forces acting on an object or system, and are employed extensively in the study and application of Newton’s laws of motion. You will see them throughout this text and in all your studies of physics. The following steps briefly explain how a free-body diagram is created; we examine this strategy in more detail in Drawing Free-Body Diagrams.

We illustrate this strategy with two examples of free-body diagrams ((Figure)). The terms used in this figure are explained in more detail later in the chapter.

The steps given here are sufficient to guide you in this important problem-solving strategy. The final section of this chapter explains in more detail how to draw free-body diagrams when working with the ideas presented in this chapter.

Development of the Force Concept

A quantitative definition of force can be based on some standard force, just as distance is measured in units relative to a standard length. One possibility is to stretch a spring a certain fixed distance ((Figure)) and use the force it exerts to pull itself back to its relaxed shape—called a restoring force—as a standard. The magnitude of all other forces can be considered as multiples of this standard unit of force. Many other possibilities exist for standard forces. Some alternative definitions of force will be given later in this chapter.

Figure 5.5 The force exerted by a stretched spring can be used as a standard unit of force. (a) This spring has a length x when undistorted. (b) When stretched a distance [latex] \text{Δ}x [/latex], the spring exerts a restoring force [latex] {\overset{\to }{F}}_{\text{restore}}, [/latex] which is reproducible. (c) A spring scale is one device that uses a spring to measure force. The force [latex] {\overset{\to }{F}}_{\text{restore}} [/latex] is exerted on whatever is attached to the hook. Here, this force has a magnitude of six units of the force standard being employed.

Let’s analyze force more deeply. Suppose a physics student sits at a table, working diligently on his homework ((Figure)). What external forces act on him? Can we determine the origin of these forces? 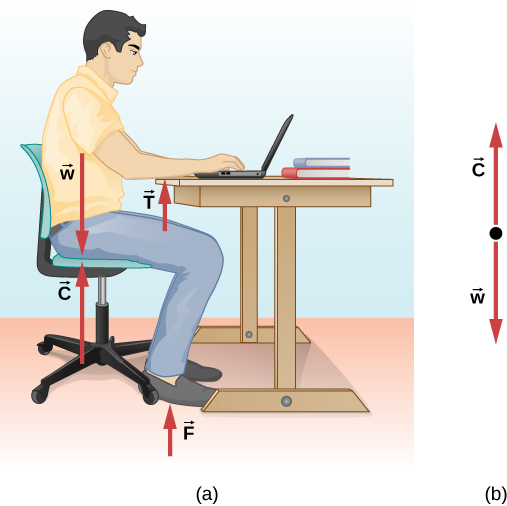 Figure 5.6 (a) The forces acting on the student are due to the chair, the table, the floor, and Earth’s gravitational attraction. (b) In solving a problem involving the student, we may want to consider the forces acting along the line running through his torso. A free-body diagram for this situation is shown.

You can think of a field as a property of space that is detectable by the forces it exerts. Scientists think there are only four fundamental force fields in nature. These are the gravitational, electromagnetic, strong nuclear, and weak fields (we consider these four forces in nature later in this text). As noted for [latex] \overset{\to }{w} [/latex] in (Figure), the gravitational field is responsible for the weight of a body. The forces of the electromagnetic field include those of static electricity and magnetism; they are also responsible for the attraction among atoms in bulk matter. Both the strong nuclear and the weak force fields are effective only over distances roughly equal to a length of scale no larger than an atomic nucleus ([latex] {10}^{-15}\,\text{m} [/latex]). Their range is so small that neither field has influence in the macroscopic world of Newtonian mechanics.

Contact forces are fundamentally electromagnetic. While the elbow of the student in (Figure) is in contact with the tabletop, the atomic charges in his skin interact electromagnetically with the charges in the surface of the table. The net (total) result is the force [latex] \overset{\to }{T} [/latex]. Similarly, when adhesive tape sticks to a piece of paper, the atoms of the tape are intermingled with those of the paper to cause a net electromagnetic force between the two objects. However, in the context of Newtonian mechanics, the electromagnetic origin of contact forces is not an important concern.

This equation can be extended to any number of forces.

The direction is given by

measured from the positive x-axis, as shown in the free-body diagram in (Figure)(b).

Find the magnitude and direction of the net force in the ice skater example just given.

View this interactive simulation to learn how to add vectors. Drag vectors onto a graph, change their length and angle, and sum them together. The magnitude, angle, and components of each vector can be displayed in several formats.

What properties do forces have that allow us to classify them as vectors?

Forces are directional and have magnitude. 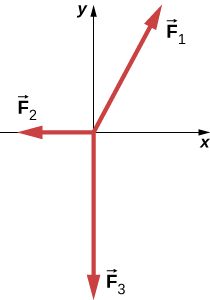 Two teenagers are pulling on ropes attached to a tree. The angle between the ropes is [latex] 30.0\text{°} [/latex]. David pulls with a force of 400.0 N and Stephanie pulls with a force of 300.0 N. (a) Find the component form of the net force. (b) Find the magnitude of the resultant (net) force on the tree and the angle it makes with David’s rope.

force
push or pull on an object with a specific magnitude and direction; can be represented by vectors or expressed as a multiple of a standard force

free-body diagram
sketch showing all external forces acting on an object or system; the system is represented by a single isolated point, and the forces are represented by vectors extending outward from that point