8 Potential Energy and Conservation of Energy

8.1 Potential Energy of a System

In Work, we saw that the work done on an object by the constant gravitational force, near the surface of Earth, over any displacement is a function only of the difference in the positions of the end-points of the displacement. This property allows us to define a different kind of energy for the system than its kinetic energy, which is called potential energy. We consider various properties and types of potential energy in the following subsections.

In Motion in Two and Three Dimensions, we analyzed the motion of a projectile, like kicking a football in (Figure). For this example, let’s ignore friction and air resistance. As the football rises, the work done by the gravitational force on the football is negative, because the ball’s displacement is positive vertically and the force due to gravity is negative vertically. We also noted that the ball slowed down until it reached its highest point in the motion, thereby decreasing the ball’s kinetic energy. This loss in kinetic energy translates to a gain in gravitational potential energy of the football-Earth system.

Figure 8.2 As a football starts its descent toward the wide receiver, gravitational potential energy is converted back into kinetic energy.

Based on this scenario, we can define the difference of potential energy from point A to point B as the negative of the work done:

In general, a system of interest could consist of several particles. The difference in the potential energy of the system is the negative of the work done by gravitational or elastic forces, which, as we will see in the next section, are conservative forces. The potential energy difference depends only on the initial and final positions of the particles, and on some parameters that characterize the interaction (like mass for gravity or the spring constant for a Hooke’s law force).

It is important to remember that potential energy is a property of the interactions between objects in a chosen system, and not just a property of each object. This is especially true for electric forces, although in the examples of potential energy we consider below, parts of the system are either so big (like Earth, compared to an object on its surface) or so small (like a massless spring), that the changes those parts undergo are negligible if included in the system.

For each type of interaction present in a system, you can label a corresponding type of potential energy. The total potential energy of the system is the sum of the potential energies of all the types. (This follows from the additive property of the dot product in the expression for the work done.) Let’s look at some specific examples of types of potential energy discussed in Work. First, we consider each of these forces when acting separately, and then when both act together.

The system of interest consists of our planet, Earth, and one or more particles near its surface (or bodies small enough to be considered as particles, compared to Earth). The gravitational force on each particle (or body) is just its weight mg near the surface of Earth, acting vertically down. According to Newton’s third law, each particle exerts a force on Earth of equal magnitude but in the opposite direction. Newton’s second law tells us that the magnitude of the acceleration produced by each of these forces on Earth is mg divided by Earth’s mass. Since the ratio of the mass of any ordinary object to the mass of Earth is vanishingly small, the motion of Earth can be completely neglected. Therefore, we consider this system to be a group of single-particle systems, subject to the uniform gravitational force of Earth.

You can see from this that the gravitational potential energy function, near Earth’s surface, is

You can choose the value of the constant, as described in the discussion of (Figure); however, for solving most problems, the most convenient constant to choose is zero for when [latex] y=0, [/latex] which is the lowest vertical position in the problem. 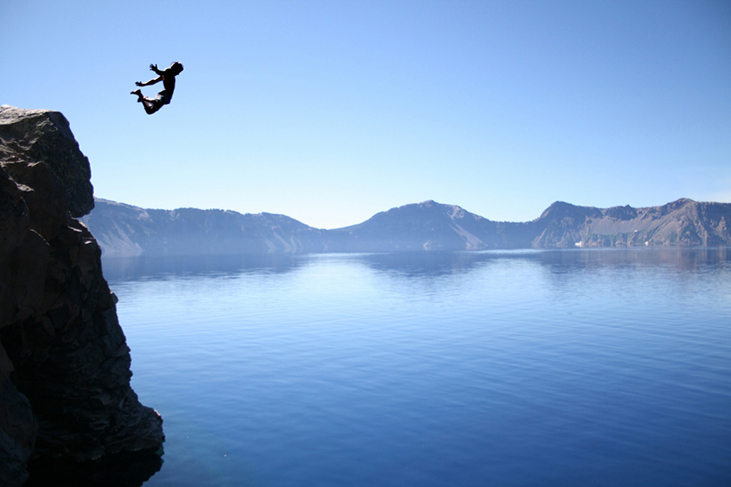 Don’t jump—you have so much potential (gravitational potential energy, that is). (credit: Andy Spearing)

Gravitational Potential Energy of a Hiker

The summit of Great Blue Hill in Milton, MA, is 147 m above its base and has an elevation above sea level of 195 m ((Figure)). (Its Native American name, Massachusett, was adopted by settlers for naming the Bay Colony and state near its location.) A 75-kg hiker ascends from the base to the summit. What is the gravitational potential energy of the hiker-Earth system with respect to zero gravitational potential energy at base height, when the hiker is (a) at the base of the hill, (b) at the summit, and (c) at sea level, afterward?

Figure 8.3 Sketch of the profile of Great Blue Hill, Milton, MA. The altitudes of the three levels are indicated.

Check Your Understanding What are the values of the gravitational potential energy of the hiker at the base, summit, and sea level, with respect to a sea-level zero of potential energy?

In Work, we saw that the work done by a perfectly elastic spring, in one dimension, depends only on the spring constant and the squares of the displacements from the unstretched position, as given in (Figure). This work involves only the properties of a Hooke’s law interaction and not the properties of real springs and whatever objects are attached to them. Therefore, we can define the difference of elastic potential energy for a spring force as the negative of the work done by the spring force in this equation, before we consider systems that embody this type of force. Thus,

where the object travels from point A to point B. The potential energy function corresponding to this difference is

If the spring force is the only force acting, it is simplest to take the zero of potential energy at [latex] x=0 [/latex], when the spring is at its unstretched length. Then, the constant is (Figure) is zero. (Other choices may be more convenient if other forces are acting.)

When the length of the spring in (Figure) changes from an initial value of 22.0 cm to a final value, the elastic potential energy it contributes changes by [latex] -0.0800\,\text{J}. [/latex] Find the final length.

A simple system embodying both gravitational and elastic types of potential energy is a one-dimensional, vertical mass-spring system. This consists of a massive particle (or block), hung from one end of a perfectly elastic, massless spring, the other end of which is fixed, as illustrated in (Figure).

Therefore, based on this convention, each potential energy and kinetic energy can be written out for three critical points of the system: (1) the lowest pulled point, (2) the equilibrium position of the spring, and (3) the highest point achieved. We note that the total energy of the system is conserved, so any total energy in this chart could be matched up to solve for an unknown quantity. The results are shown in (Figure). 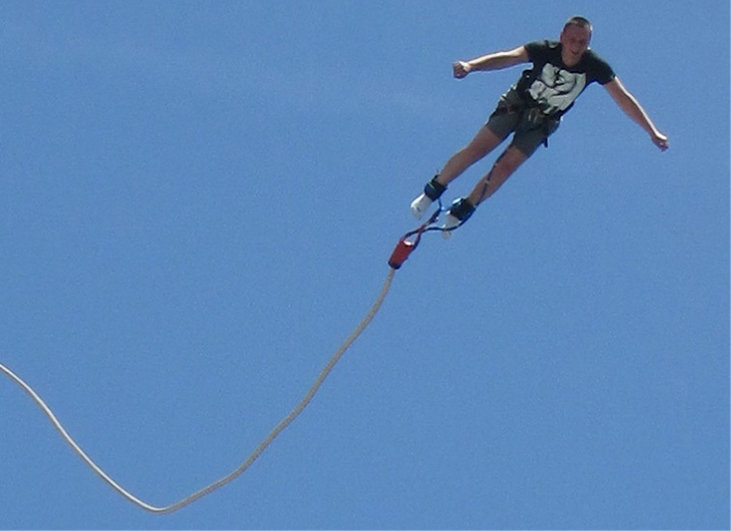 Even though the potential energies are relative to a chosen zero location, the solutions to this problem would be the same if the zero energy points were chosen at different locations.

It increases because you had to exert a downward force, doing positive work, to pull the mass down, and that’s equal to the change in the total potential energy.

View this simulation to learn about conservation of energy with a skater! Build tracks, ramps and jumps for the skater and view the kinetic energy, potential energy and friction as he moves. You can also take the skater to different planets or even space!

A sample chart of a variety of energies is shown in (Figure) to give you an idea about typical energy values associated with certain events. Some of these are calculated using kinetic energy, whereas others are calculated by using quantities found in a form of potential energy that may not have been discussed at this point.

The potential energy of a system can be negative because its value is relative to a defined point.

Describe the gravitational potential energy transfers and transformations for a javelin, starting from the point at which an athlete picks up the javelin and ending when the javelin is stuck into the ground after being thrown.

A couple of soccer balls of equal mass are kicked off the ground at the same speed but at different angles. Soccer ball A is kicked off at an angle slightly above the horizontal, whereas ball B is kicked slightly below the vertical. How do each of the following compare for ball A and ball B? (a) The initial kinetic energy and (b) the change in gravitational potential energy from the ground to the highest point? If the energy in part (a) differs from part (b), explain why there is a difference between the two energies.

What is the dominant factor that affects the speed of an object that started from rest down a frictionless incline if the only work done on the object is from gravitational forces?

the vertical height from the ground to the object

Two people observe a leaf falling from a tree. One person is standing on a ladder and the other is on the ground. If each person were to compare the energy of the leaf observed, would each person find the following to be the same or different for the leaf, from the point where it falls off the tree to when it hits the ground: (a) the kinetic energy of the leaf; (b) the change in gravitational potential energy; (c) the final gravitational potential energy?

Using values from (Figure), how many DNA molecules could be broken by the energy carried by a single electron in the beam of an old-fashioned TV tube? (These electrons were not dangerous in themselves, but they did create dangerous X-rays. Later-model tube TVs had shielding that absorbed X-rays before they escaped and exposed viewers.)

If the energy in fusion bombs were used to supply the energy needs of the world, how many of the 9-megaton variety would be needed for a year’s supply of energy (using data from (Figure))?

potential energy
function of position, energy possessed by an object relative to the system considered