8 Potential Energy and Conservation of Energy

In Potential Energy and Conservation of Energy, any transition between kinetic and potential energy conserved the total energy of the system. This was path independent, meaning that we can start and stop at any two points in the problem, and the total energy of the system—kinetic plus potential—at these points are equal to each other. This is characteristic of a conservative force. We dealt with conservative forces in the preceding section, such as the gravitational force and spring force. When comparing the motion of the football in (Figure), the total energy of the system never changes, even though the gravitational potential energy of the football increases, as the ball rises relative to ground and falls back to the initial gravitational potential energy when the football player catches the ball. Non-conservative forces are dissipative forces such as friction or air resistance. These forces take energy away from the system as the system progresses, energy that you can’t get back. These forces are path dependent; therefore it matters where the object starts and stops.

The work done by a non-conservative force depends on the path taken.

Equivalently, a force is conservative if the work it does around any closed path is zero:

[In (Figure), we use the notation of a circle in the middle of the integral sign for a line integral over a closed path, a notation found in most physics and engineering texts.] (Figure) and (Figure) are equivalent because any closed path is the sum of two paths: the first going from A to B, and the second going from B to A. The work done going along a path from B to A is the negative of the work done going along the same path from A to B, where A and B are any two points on the closed path:

You might ask how we go about proving whether or not a force is conservative, since the definitions involve any and all paths from A to B, or any and all closed paths, but to do the integral for the work, you have to choose a particular path. One answer is that the work done is independent of path if the infinitesimal work [latex] \overset{\to }{F}·d\overset{\to }{r} [/latex] is an exact differential, the way the infinitesimal net work was equal to the exact differential of the kinetic energy, [latex] d{W}_{\text{net}}=m\overset{\to }{v}·d\overset{\to }{v}=d\frac{1}{2}m{\text{v}}^{2}, [/latex]

when we derived the work-energy theorem in Work-Energy Theorem. There are mathematical conditions that you can use to test whether the infinitesimal work done by a force is an exact differential, and the force is conservative. These conditions only involve differentiation and are thus relatively easy to apply. In two dimensions, the condition for [latex] \overset{\to }{F}·d\overset{\to }{r}={F}_{x}dx+{F}_{y}dy [/latex] to be an exact differential is

You may recall that the work done by the force in (Figure) depended on the path. For that force, 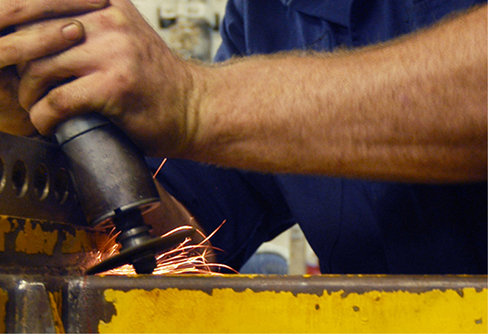 Figure 8.5 A grinding wheel applies a non-conservative force, because the work done depends on how many rotations the wheel makes, so it is path-dependent.

Which of the following two-dimensional forces are conservative and which are not? Assume a and b are constants with appropriate units:

Here, we chose to represent the displacement in an arbitrary direction by [latex] d\overset{\to }{l}, [/latex] so as not to be restricted to any particular coordinate direction. We also expressed the dot product in terms of the magnitude of the infinitesimal displacement and the component of the force in its direction. Both these quantities are scalars, so you can divide by dl to get

This equation gives the relation between force and the potential energy associated with it. In words, the component of a conservative force, in a particular direction, equals the negative of the derivative of the corresponding potential energy, with respect to a displacement in that direction. For one-dimensional motion, say along the x-axis, (Figure) give the entire vector force, [latex] \overset{–}{F}={F}_{x}\hat{i}=-\frac{\partial U}{\partial x}\hat{i}. [/latex]

From this equation, you can see why (Figure) is the condition for the work to be an exact differential, in terms of the derivatives of the components of the force. In general, a partial derivative notation is used. If a function has many variables in it, the derivative is taken only of the variable the partial derivative specifies. The other variables are held constant. In three dimensions, you add another term for the z-component, and the result is that the force is the negative of the gradient of the potential energy. However, we won’t be looking at three-dimensional examples just yet.

Force due to a Quartic Potential Energy

What is the physical meaning of a non-conservative force?

A force that takes energy away from the system that can’t be recovered if we were to reverse the action.

A bottle rocket is shot straight up in the air with a speed [latex] 30\,\text{m/s} [/latex]. If the air resistance is ignored, the bottle would go up to a height of approximately [latex] 46\,\text{m} [/latex]. However, the rocket goes up to only [latex] 35\,\text{m} [/latex] before returning to the ground. What happened? Explain, giving only a qualitative response.

An external force acts on a particle during a trip from one point to another and back to that same point. This particle is only effected by conservative forces. Does this particle’s kinetic energy and potential energy change as a result of this trip?

The change in kinetic energy is the net work. Since conservative forces are path independent, when you are back to the same point the kinetic and potential energies are exactly the same as the beginning. During the trip the total energy is conserved, but both the potential and kinetic energy change.

The potential energy function for either one of the two atoms in a diatomic molecule is often approximated by [latex] U(x)=\text{−}a\text{/}{x}^{12}-b\text{/}{x}^{6} [/latex] where x is the distance between the atoms. (a) At what distance of seperation does the potential energy have a local minimum (not at [latex] x=\infty )? [/latex] (b) What is the force on an atom at this separation? (c) How does the force vary with the separation distance?

A crate on rollers is being pushed without frictional loss of energy across the floor of a freight car (see the following figure). The car is moving to the right with a constant speed [latex] {v}_{0}. [/latex] If the crate starts at rest relative to the freight car, then from the work-energy theorem, [latex] Fd=m{v}^{2}\text{/}2, [/latex] where d, the distance the crate moves, and v, the speed of the crate, are both measured relative to the freight car. (a) To an observer at rest beside the tracks, what distance [latex] d\text{′} [/latex] is the crate pushed when it moves the distance d in the car? (b) What are the crate’s initial and final speeds [latex] {v}_{0}\text{′} [/latex] and [latex] v\text{′} [/latex] as measured by the observer beside the tracks? (c) Show that [latex] Fd\text{′}=m{(v\text{′})}^{2}\text{/}2-m{(v{\text{′}}_{0})}^{2}\text{/}2 [/latex] and, consequently, that work is equal to the change in kinetic energy in both reference systems.

conservative force
force that does work independent of path

non-conservative force
force that does work that depends on path