One of the interesting aspects of organic chemistry is that it is three-dimensional. A molecule can have a shape in space that may contribute to its properties. Molecules can differ in the way the atoms are arranged – the same combination of atoms can be assembled in more than one way. These compounds are known as isomers. Isomers are molecules with the same molecular formulas, but different arrangements of atoms. There are several different types of isomers which will be described and a flowchart (see figure below) can help you determine which type of isomers are present. 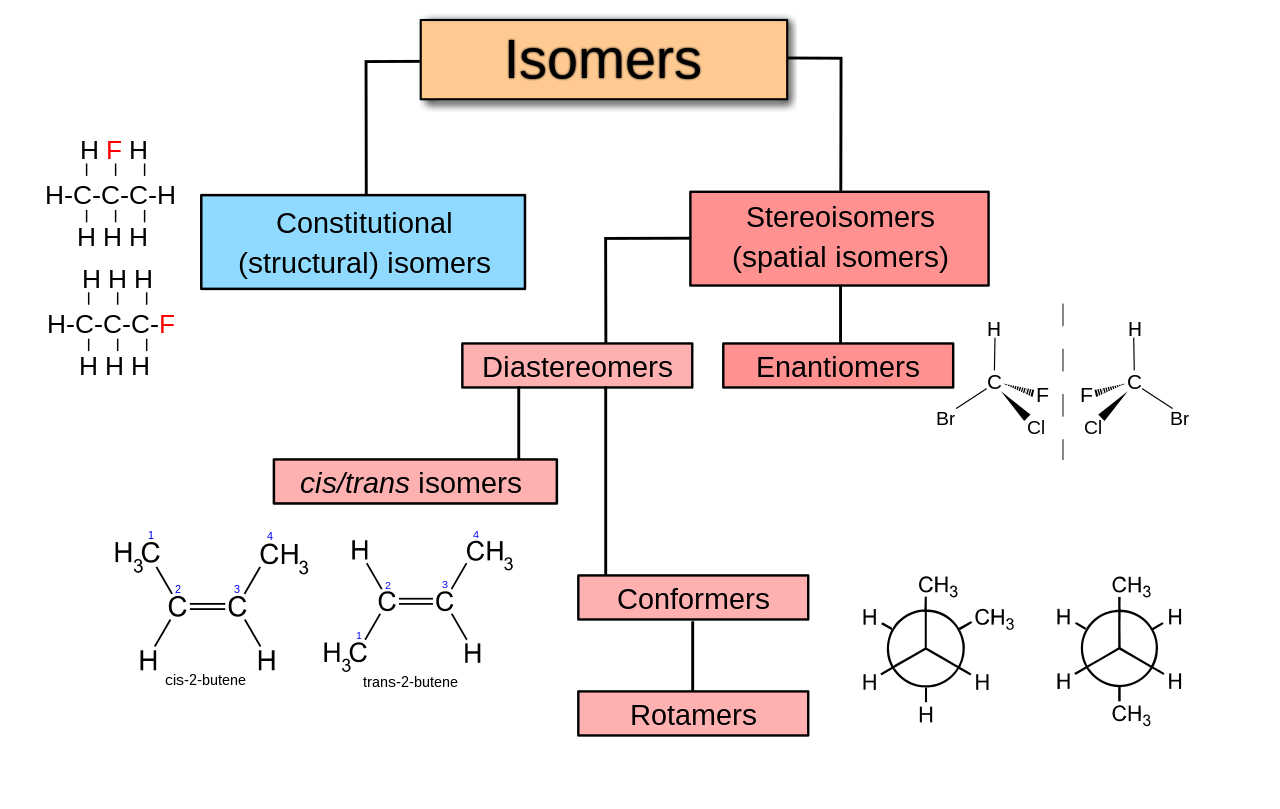 Conformational isomers, also known as conformers, differ from one another by their rotation around a single bond. Rotations occur freely around single carbon-carbon bonds. Unlike double and triple bonds, which are “locked” in their orientation, single bonds have no such restrictions.

A structural isomer, also known as a constitutional isomer, is one in which two or more organic compounds have the same molecular formulas but different structures. The two molecules below have the same chemical formula, but are different molecules because they differ in the location of the methyl group.

Alkenes can also demonstrate structural isomerism. In alkenes, there are multiple structural isomers based on where in the chain the double bond occurs. The condensed structural formulas of 1-butene and 2-butene (also called but-1-ene & but-2-ene) show this.

The number in the name of the alkene refers to the lowest numbered carbon in the chain that is part of the double bond.

Stereoisomers have the same connectivity in their atoms but a different arrangement in three-dimensional space. There are different classifications of stereoisomers depending on how the arrangements differ from one another. Notice that in the structural isomers, there was some difference in the connection of atoms. For example, 1-butene has a double bond followed by two single bonds while 2-butene has a single bond, then a double bond, then a single bond. A stereoisomer will have the same connectivity among all atoms in the molecule.  There are several types of stereoisomer, but they are often classified as diastereomers (which includes cis/trans isomers) or enantiomers.

With a molecule such as 2-butene, a different type of isomerism called geometric isomerism can be observed. Geometric isomers are isomers in which the order of atom bonding is the same but the arrangement of atoms in space is different. The double bond in an alkene is not free to rotate because of the nature of the bond. Therefore, there are two different ways to construct the 2-butene molecule (see figure below). The image below shows the two geometric isomers, called cis-2-butene and trans-2-butene. The cis isomer has the two single hydrogen atoms on the same side of the molecule, while the trans isomer has them on opposite sides of the molecule. In both molecules, the bonding order of the atoms is the same. In order for geometric isomers to exist, there must be a rigid structure in the molecule to prevent free rotation around a bond. This occurs with a double bond or a ring. In addition, the two carbon atoms must each have two different groups attached in order for there to be geometric isomers. Propene (see figure below) has no geometric isomers because one of the carbon atoms (the one on the far left) involved in the double bond has two single hydrogens bonded to it. Propene does not have a geometric isomer.

Physical and chemical properties of geometric isomers are generally different. As with alkenes, alkynes display structural isomerism beginning with 1-butyne and 2-butyne. However, there are no geometric isomers with alkynes because there is only one other group bonded to the carbon atoms that are involved in the triple bond.

Stereoisomers that are not geometric isomers are known as optical isomers. Optical isomers differ in the placement of substituted groups around one or more atoms of the molecule. They were given their name because of their interactions with plane-polarized light. Optical isomers are labeled enantiomers or diastereomers. 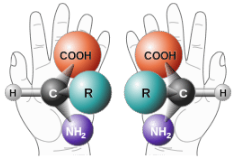 Objects that have non-superimposable mirror images are called chiral. When examining a molecule, carbon atoms with four unique groups attached are considered chiral. Look at the figure below to see an example of a chiral molecule. Note that we have to look beyond the first atom attached to the central carbon atom. The four circles indicate the four unique groups attached to the central carbon atom, which is chiral.

A chiral carbon has four unique groups attached to it.

Another type of optical isomer comprises those diastereomers which are not geometric (cis-trans) isomers). These are achiral (non-mirror image) optical isomers. Diastereomers have a different arrangement around one or more atoms while some of the atoms have the same arrangement. As shown in the figure below, note that the orientation of groups on the first and third carbons are different but the second one remains the same so they are not the same molecule. The solid wedge indicates a group coming out of the page/screen towards you and the dashed line indicates that a group is going away from you “behind” the page/screen.

Diastereomers differ at one or more atom. These molecules are not mirror images and they are not superimposable. They are optical isomers because they have the same connectivity between atoms but a different arrangement of substituent groups.