With over twenty million known organic compounds in existence, it would be very challenging to memorize chemical reactions for each one. Fortunately, molecules with similar functional groups tend to undergo similar reactions.  Functional groups are structural units within organic compounds that are defined by specific bonding arrangements between specific atoms.  For example the structure of capsaicin, found in chili peppers, incorporates several functional groups, labeled in the figure below and explained throughout this section.

The ‘default’ in organic chemistry (essentially, the lack of any functional groups) is given the term alkane, characterized by single bonds between carbon and carbon, or between carbon and hydrogen.  Methane, CH4, is the natural gas you may burn in your furnace.  Octane, C8H18, is a component of gasoline.

Alkenes (sometimes called olefins) have carbon-carbon double bonds, and alkynes have carbon-carbon triple bonds.  Ethene, the simplest alkene example, is a gas that serves as a cellular signal in fruits to stimulate ripening.  (If you want bananas to ripen quickly, put them in a paper bag along with an apple – the apple emits ethene gas, setting off the ripening process in the bananas). Ethyne, commonly called acetylene, is used as a fuel in welding blow torches. 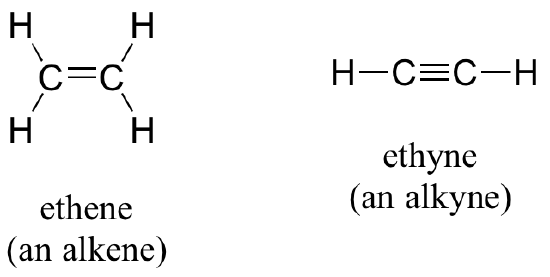 Later, we will study the nature of the bonding on alkenes and alkynes, and learn that that the bonding in alkenes is trigonal planar in in alkynes is linear.  Furthermore, many alkenes can take two geometric forms: cis or trans. The cis and trans forms of a given alkene are different molecules with different physical properties because, as we will learn in chapter 2, there is a very high energy barrier to rotation about a double bond. In the example below, the difference between cis and trans alkenes is readily apparent.

The aromatic group is exemplified by benzene (which used to be a commonly used solvent in the organic lab, but which was shown to be carcinogenic), and naphthalene, a compound with a distinctive ‘mothball’ smell. Aromatic groups are planar (flat) ring structures, and are widespread in nature.  We will learn more about the structure and reactions of aromatic groups next semester.

When the carbon of an alkane is bonded to one or more halogens, the group is referred to as a alkyl halide or haloalkane.  Chloroform is a useful solvent in the laboratory, and was one of the earlier anesthetic drugs used in surgery. Chlorodifluoromethane was used as a refrigerant and in aerosol sprays until the late twentieth century, but its use was discontinued after it was found to have harmful effects on the ozone layer. Bromoethane is a simple alkyl halide often used in organic synthesis. Alkyl halides groups are quite rare in biomolecules.

In the alcohol functional group, a carbon is single-bonded to an OH group (the OH group, by itself, is referred to as a hydroxyl). Except for methanol, all alcohols can be classified as primary, secondary, or tertiary.  In a primary alcohol, the carbon bonded to the OH group is also bonded to only one other carbon.  In a secondary alcohol and tertiary alcohol, the carbon is bonded to two or three other carbons, respectively. When the hydroxyl group is directly attached to an aromatic ring, the resulting group is called a phenol. The sulfur analog of an alcohol is called a thiol (from the Greek thio, for sulfur).

Note that the definition of a phenol states that the hydroxyl oxygen must be directly attached to one of the carbons of the aromatic ring. The compound below, therefore, is not a phenol – it is a primary alcohol. 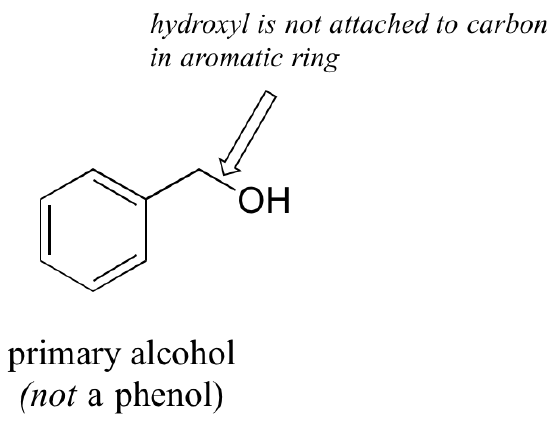 The distinction is important, because as we will see later, there is a significant difference in the reactivity of alcohols and phenols.

We are already familiar with several common alcohols. For example, ethanol [latex] \left( \ce{CH_3CH_2OH} \right) [/latex] is the alcohol present in alcoholic beverages. It is also widely used in the industrial manufacture of other chemicals. Methanol [latex] \left( \ce{CH_3OH} \right) [/latex] is used as a gasoline additive or alternative. Additionally, methanol can be used to manufacture formaldehyde, which is employed in the production of plastics, paints, and other useful substances. Isopropanol is commonly known as rubbing alcohol. In addition to its industrial uses, isopropanol is used to clean various surfaces, including computer monitors, whiteboards, and even skin (e.g., before getting blood drawn).

The deprotonated forms of alcohols, phenols, and thiols are called alkoxides, phenolates, and thiolates, respectively. A protonated alcohol is an oxonium ion. 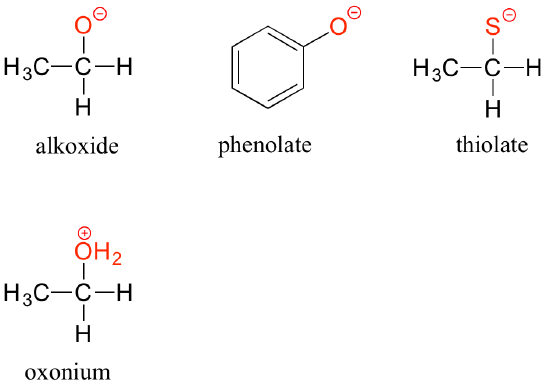 In an ether functional group, a central oxygen is bonded to two carbons. Below is the structure of diethyl ether, a common laboratory solvent and also one of the first compounds to be used as an anesthetic during operations. Ethers are good solvents for other organic compounds because of their low reactivity. They readily dissolve nonpolar molecules. The sulfur analog of an ether is called a thioether or sulfide. 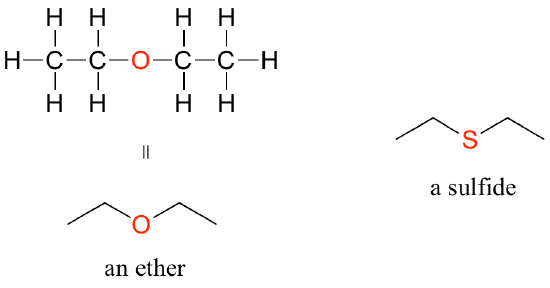 One of the most important properties of amines is that they are basic, and are readily protonated to form ammonium cations. In the case where a nitrogen has four bonds to carbon (which is somewhat unusual in biomolecules), it is called a quaternary ammonium ion.

Many smaller amines have very strong and offensive odors. For example, the aptly-named compounds cadaverine and putrescine are foul-smelling amines, formed as a part of the decay process after death.

Amines serve a wide variety of uses. Diphenylamine acts as a stabilizer for certain types of explosives. Amines are found as components in some lubricating materials, in developers, and are a part of waterproofing textiles. Some amines, such as novocaine, are used as anesthetics. Many pharmaceutical compounds contain amines, including 8 of the 10 most prescribed medications in 2012.

There are a number of functional groups that contain a carbon-oxygen double bond, which is commonly referred to as a carbonyl.   Ketones and aldehydes are two closely related carbonyl-based functional groups that react in very similar ways.  In a ketone, the carbon atom of a carbonyl is bonded to two other carbons.  In an aldehyde, the carbonyl carbon is bonded on one side to a hydrogen, and on the other side to a carbon.  The exception to this definition is formaldehyde, in which the carbonyl carbon has bonds to two hydrogens.

The simplest aldehyde has a carbonyl group bonded to two hydrogen atoms. This molecule, called formaldehyde, can be used as a tissue preservative or as a very harsh disinfectant. It is also used as a precursor to various materials, including plastics, resins, and other polymers.

Ketones undergo most of the same reactions as aldehydes, but they tend to be slightly less reactive. The simplest ketone is acetone, in which the carbonyl carbon is bonded to two [latex] \ce{CH_3} [/latex] groups. This ketone is commonly used to remove fingernail polish and serves as an industrial solvent. Methyl ethyl ketone is used as a paint stripper and a solvent. Ketones are also used in the production of various polymers, either as a building block or as a solvent.

A group with a carbon-nitrogen double bond is called an imine, or sometimes a Schiff base (in this book we will use the term ‘imine’). 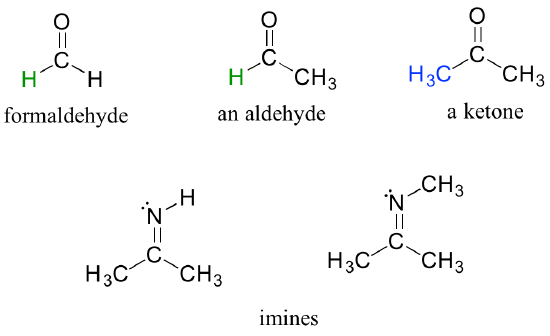 As the name implies, carboxylic acids are weak acids. An [latex] \ce{OH} [/latex] group that is directly connected to a carbonyl will ionize to a small extent when dissolved in water. because of the relative stability of the resulting anion. A carboxylate ion (see figure below), in which the negative charge is spread over two different oxygen atoms through resonance structures, is more stable than an isolated oxygen-centered anion.

Carboxylic acids are used in a variety of environments. Formic acid acts as a protective chemical for many stinging insects and plants. Acetic acid gives vinegar its characteristic smell and flavor and is a fundamental biological and industrial building block. Carboxylic acids with longer carbon chains (fatty acids) are used by animals as a way of storing energy and are widely used in the manufacture of soaps. Some compounds contain multiple carboxylic acids within a single molecule. For example, citric acid (three carboxyl groups) is especially abundant in citrus fruits and it used as a flavoring and preservative in many foods and beverages.

Esters are very important in synthesis and in nature.  Some esters have very pleasant odors, so they are used in the manufacture of many perfumes. Propyl acetate contributes to the odor of pears, while isoamyl acetate gives bananas their smell. This ester also serves as an alarm signal for honeybees. Esters are employed in the manufacture of fabrics (polyesters) and Plexiglass. Anesthetics such as procaine and benzocaine also contain esters.

The amide group forms is extremely important in biological systems, where it is called a “peptide”, used for linking amino acids together to form polypeptides and (ultimately) proteins.  Amides are used as coloring agents in crayons, pencils, and ink. They are employed in the paper, plastic, and rubber industries. Polyacrylamide is a very widely used amide; it is involved in t he treatment of drinking water and sewage, and in plastics manufacture. The amide Kevlar is widely employed for the production of body armor, and nylon is another type of amide-based polymer.

Finally, a nitrile group is characterized by a carbon triple-bonded to a nitrogen.

The hormone testosterone, the amino acid phenylalanine, and the glycolysis metabolite dihydroxyacetone phosphate all contain multiple functional groups, as labeled below. 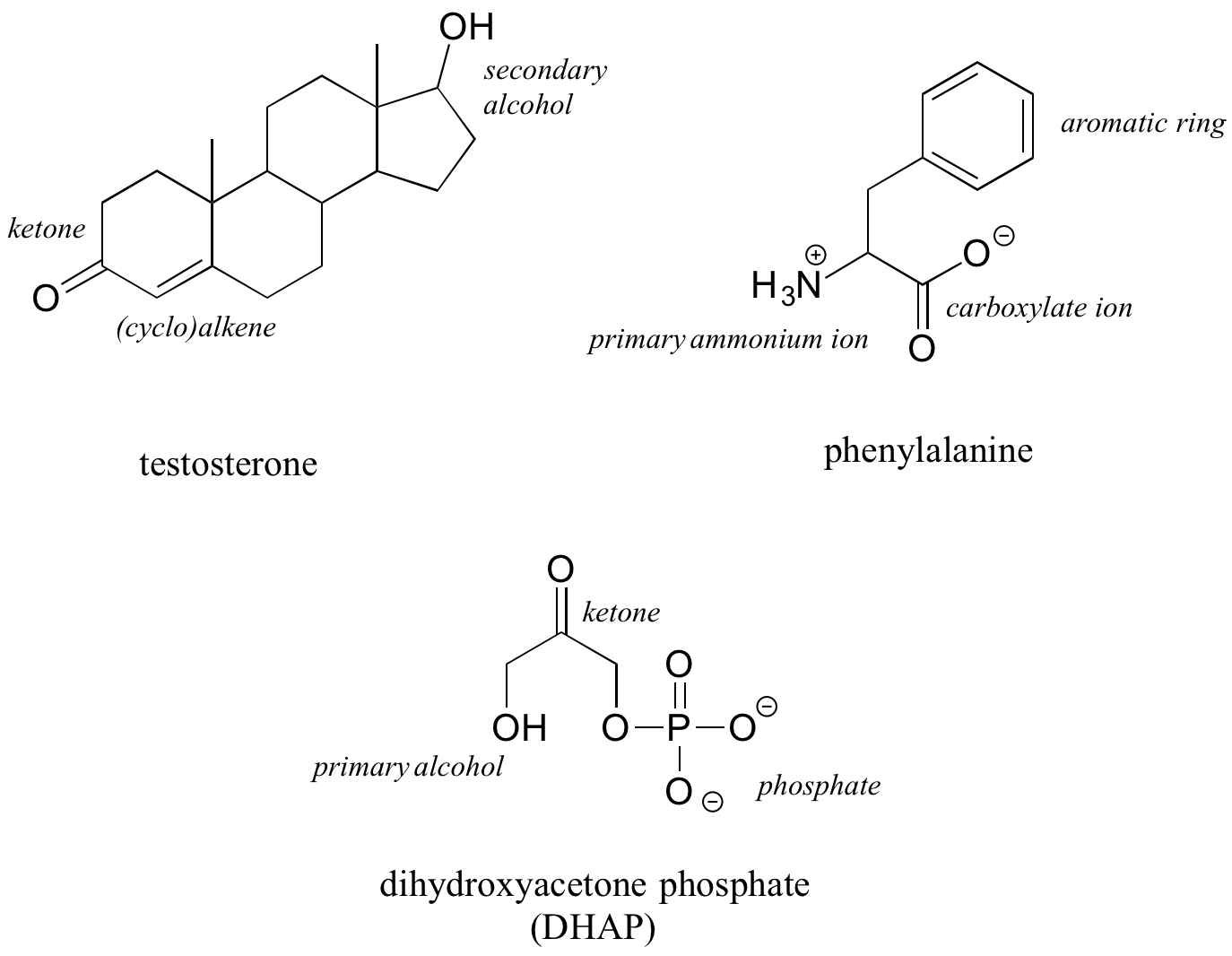 While not in any way a complete list, this section has covered most of the important functional groups that we will encounter in synthetic and biological organic chemistry.   A summary table is included in your workbook, and is reproduced here for reference; the “priority” is used when determining how to name a compound with multiple functional groups.  We will formally learn how to name functional groups later.

Identify the functional groups (other than alkanes) in the following organic compounds. State whether alcohols and amines are primary, secondary, or tertiary. 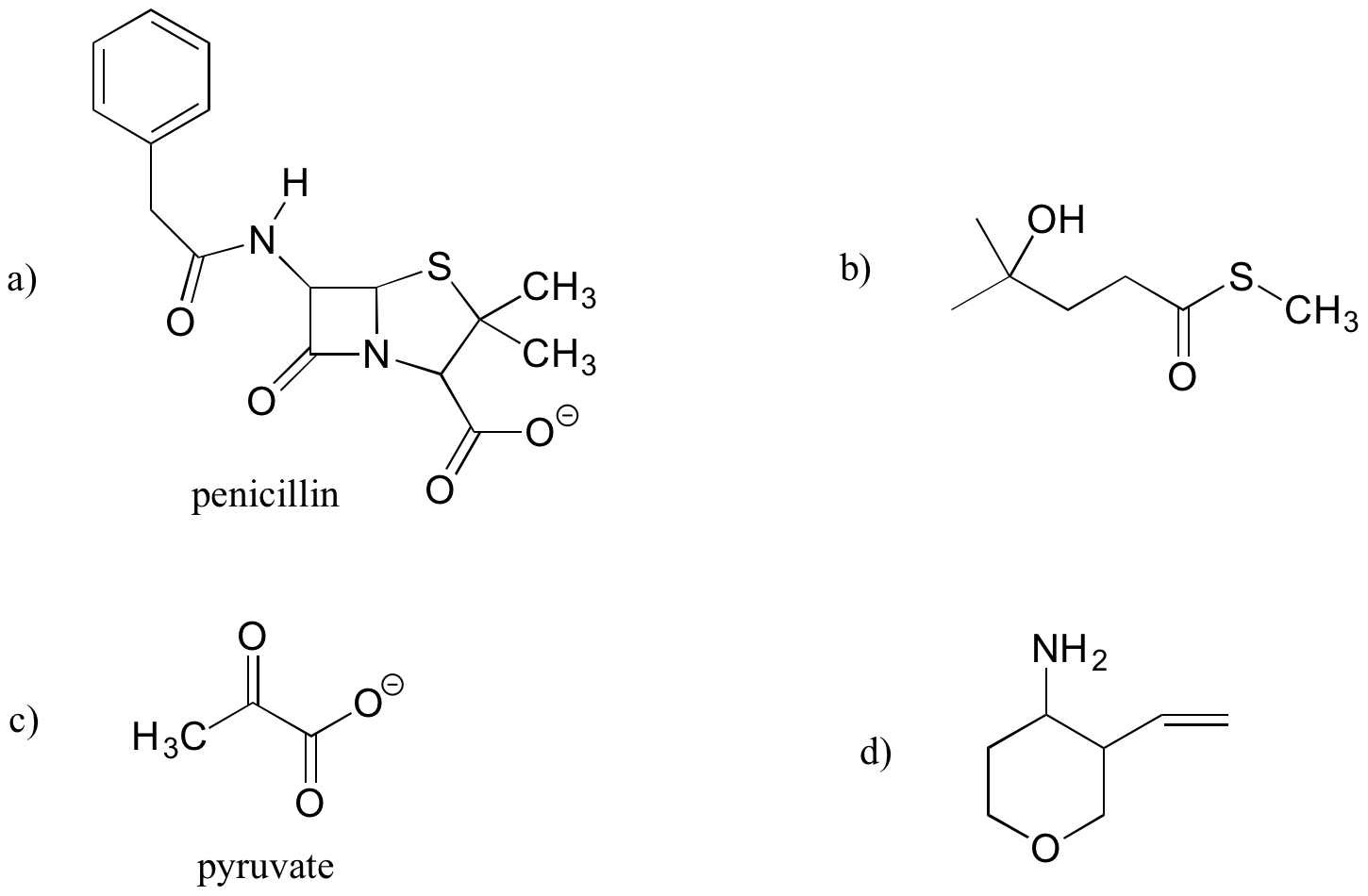 a) carboxylate, sulfide, aromatic, two amide groups (one of which is cyclic)

Draw one example each of compounds fitting the descriptions below, using line structures.  Be sure to designate the location of all non-zero formal charges. All atoms should have complete octets (phosphorus may exceed the octet rule). There are many possible correct answers for these, so be sure to check your structures with your instructor or tutor.

b) an ion with molecular formula C3H5O6P 2- that  includes aldehyde, secondary alcohol, and phosphate functional groups.

c) A compound with molecular formula C6H9NO that has an amide functional group, and does not have an alkene group. 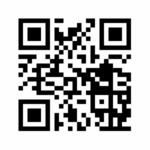