10.7.1. Reaction of alkenes with carbenes – cyclopropanation

The highly strained nature of cyclopropane compounds makes them very reactive and interesting synthetic targets. Additionally cyclopropanes are present in many biological compounds. One common method of cyclopropane synthesis is the reaction of carbenes with the double bond in alkenes or cycloalkenes. Methylene, H2C, is the simplest carbene, and in general carbenes have the formula R2C. Other species that will also react with alkenes to form cyclopropanes but do not follow the formula of carbenes are referred to as carbenoids.

Carbenes were once only thought of as short lived intermediates. The reactions of this section only deal with these short lived carbenes which are mostly prepared in situ, at the time of the main reaction. However, there do exist so called persistent carbenes, which are stabilized by a variety of methods often including aromatic rings or transition metals. In general a carbene is neutral and has six valence electrons, two of which are non bonding. These electrons can either occupy the same sp2 hybridized orbital to form a singlet carbene (with paired electrons), or two different sp2 orbitals to form a triplet carbene (with unpaired electrons), but we will focus exclusively on the more common singlet carbenes.

The reactivity of a singlet carbene is concerted and similar to that of electrophilic or nucleophilic addition. The highly reactive nature of carbenes leads to very fast reactions in which the rate determining step is generally carbene formation.

A carbene such as methylene will react with an alkene which will break the double bond and result with a cyclopropane. The reaction will usually leave stereochemistry of the double bond unchanged. As stated before, carbenes are generally formed during the reaction; hence the starting material is diazomethane not methylene.

In addition to the general carbene with formula R2C: there exist a number of other compounds that behave in much the same way as carbenes in the synthesis of cyclopropane derivatives. Halogenated carbenes such as dichlorocarbene, Cl2C:, are more stable than simple alkyl carbenes. Dichlorocarbene can be conveniently prepared from chloroform (CHCl3) with base in the presence of a phase transfer catalyst:

These halogenated carbenes form cyclopropanes in the same manner as methylene:

2. What would be the result of a reaction of diazomethane with trans-3-pentene in the presence of light?

2. The stereochemistry will be retained making a cyclopropane with trans methyl and ethyl groups. Trans-1-ethyl-2-methylcyclopropane

3. The cis configuration will be maintained from reagent to product so we would want to start with cis-3-hexene. DIazomethane would be the carbene source, with methylene as the carbene.

4. The halogenated carbene will react the same as methylene yielding, cis-1,1-dichloro-2,3-dimethylcyclopropane.

Halogen molecules such as Cl2 and Br2 also add to alkene double bonds. Here we need not be concerned with orientation since the two ends of the adding molecule are identical, but the electrophilic addition mechanism helps us understand another characteristic of this reaction, its stereochemistry.

If bromine is added to cyclopentene, we might anticipate two products which differ in how the bromine atoms are geometrically related to each other. If the two bromines are on the same face of the ring, the compound is called cis. If they are on opposite faces, the compound is called trans. The experimental result is that only the trans product is formed.

One of the bromine atoms is acting as an electrophile. If we apply the usual mechanism, its first step it would go like this:

As we learned in our study of SN1 reactions, carbocations are attacked by nucleophiles on both faces. If a carbocation is present in this system, we’d expect to find both the cis and trans products.

This is not what happens when the experiment is done, so we conclude that the carbocation is not present, or it reacts immediately to form a new cation. Something is happening which prevents the nucleophilic bromide ion from attacking the face of the carbocation which already is attached to the first bromine. We understand that by envisioning that the electrophilic bromine atom attaches itself to both alkene carbon atoms. One bond is made using the electrons from the pi bond, and the other is made using an unshared electron pair from the bromine. This results in a new ring formed from the bromine and the two alkene carbon atoms. It is called a “bromonium” ion.  Note that the mechanism for forming the three-membered ring has some parallels with cyclopropanation, described above.

Attack by the nucleophilic bromide ion on the bromine in this ring would only result in cyclopentene and bromine, so no reaction would occur. Attack by the bromide ion on the either of the alkene carbons would be like an SN2 reaction. The attacked carbon would invert, and the product would have the trans configuration. (Notice that there are two such products, which are enantiomers, so we get a racemic mixture.)

The simple addition of water to alkenes using H2SO4 and H2O is straightforward, but it can suffer from side reactions that reduce the yield, such as carbocation rearrangements.  In such cases, one alternative us to use a more complex method, oxymercuration-demercuration, which nevertheless gives usually a cleaner reaction.  It does, however, involve the use of toxic mercury reagents – in this case, mercury(II) acetate, written as Hg(OAc)2.

The organomercury intermediate is then reduced by sodium borohydride – the mechanism for this final step is beyond the scope of our discussion here, but the H simply replaces the Hg group with retention of stereochemistry.  The H that is introduced is shown explicitly.

Notice that overall, the oxymercuration – demercuration mechanism follows Markovnikov’s regioselectivity with the OH group attached to the more substituted carbon and the H attached to the less substituted carbon. The reaction is also stereoselective, in that the H and the OH are added exclusively anti to one another.  The reaction is useful because strong acids are not required, and carbocation rearrangements are avoided because no discrete carbocation intermediate forms.  However, it does require the use of highly toxic mercury compounds. 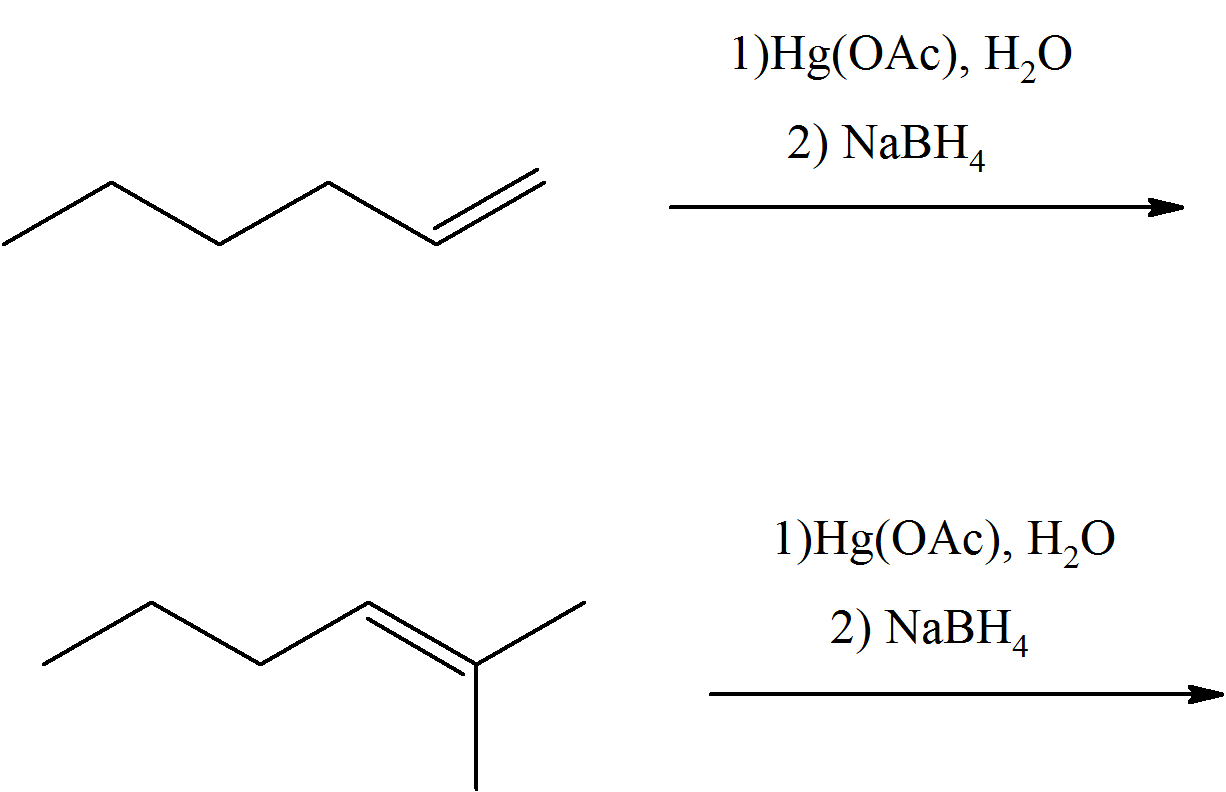 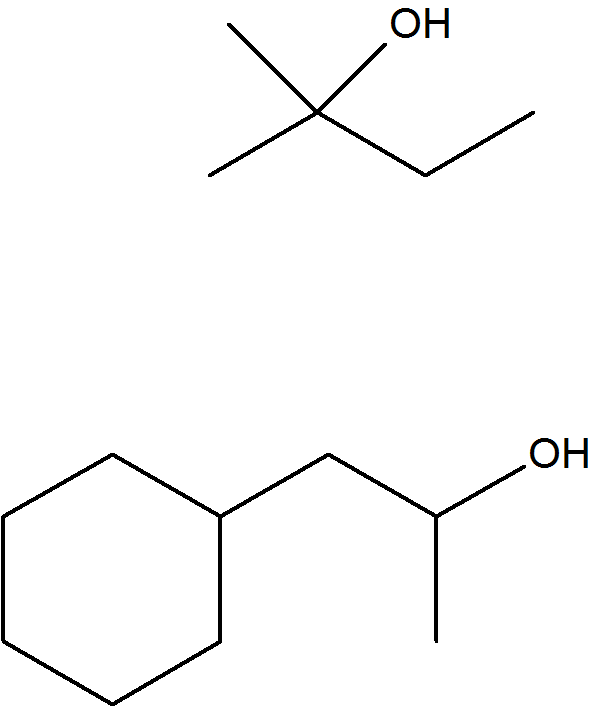 Epoxide, also called oxiranes, are useful reagents that may be opened by further reaction to form anti vicinal diols. One way to synthesize epoxides is through the reaction of an alkene with a peroxycarboxylic acid such as MCPBA.

Peroxycarboxylic acids are generally unstable. One stable example is meta-chloroperoxybenzoic acid, shown in the mechanism below. Often abbreviated MCPBA, it is a stable crystalline solid that is popular for laboratory use. However, MCPBA can be explosive under some conditions.

Peroxycarboxylic acids are sometimes replaced in industrial applications by monoperphthalic acid, or the monoperoxyphthalate ion bound to magnesium, which gives magnesium monoperoxyphthalate (MMPP). In either case, a nonaqueous solvent such as dichloromethane, ether, acetone, or dioxane is used. This is because in an aqueous medium with any strong acid or base catalyst present, the epoxide ring is hydrolyzed to form a vicinal diol, a molecule with two OH groups on neighboring carbons. (For more explanation of how this reaction leads to vicinal diols, see below.)  However, in a nonaqueous solvent, the hydrolysis is prevented and the epoxide ring can be isolated as the product. Reaction yields from this reaction are usually good. The reaction rate is affected by the nature of the alkene, with more nucleophilic double bonds resulting in faster reactions.

2. Predict the product of the reaction of trans-2-pentene with MMPP in CH2Cl2 solvent.

b) after aqueous acidic work-up.

5. Predict the reaction of cis-2-butene in dichloromethane solvent.