10.8. Anti-Markovnikov additions to alkenes and alkynes

10.8.1. Anti-Markovnikov addition of HBr to alkenes

This is useful in synthesis, because both products are accessible in one step from one alkene.
The mechanism in the presence of peroxides involves free radicals, and will be covered in part 2 of this book.

10.8.2. Anti-Markovnikov addition of H2O to alkenes

The two most important factors influencing organic reactions are polar (or electronic) effects and steric effects.  This reaction exhibits both factors.  Since boron is both larger and less electronegative than hydrogen, when BH3 adds to an alkene we see the hydrogen go onto the more substituted carbon.  This is the opposite of what we have usually seen with most additions of H-X, because in previous examples the X atom (Cl, Br, I, or O) was always more electronegative than H.

Hydroboration-oxidation is a two step pathway used to produce alcohols. The reaction proceeds in an anti-Markovnikov manner, where the hydrogen (from BH3 or BHR2) attaches to the more substituted carbon and the boron attaches to the least substituted carbon in the alkene double bond. Furthermore, the borane acts as a Lewis acid by accepting two electrons in its empty p orbital from an alkene that is electron rich. This process allows boron to have an complete octet.  The hydroboration mechanism has the elements of both hydrogenation and electrophilic addition and it is a stereospecific (syn addition), meaning that the hydroboration takes place on the same face of the double bond, this leads cis stereochemistry.

Borane itself exists naturally as a very toxic gas in the form of a dimer with the general formula B2H6 (diborane), which ignites spontaneously in air. Borane is commercially available in ether and tetrahydrofuran (THF).  In these solutions the borane exists as a Lewis acid-base complex, which allows boron to have an complete octet.

Part #1: Hydroboration of the alkene. In this first step the addition of the borane to the alkene is initiated and proceeds as a concerted reaction because bond breaking and bond formation occur at the same time. This step involves the vacant 2p orbital of the boron electrophile pairing with the electron pair of the π-bond of the alkene nucleophile.

Oxidation of the trialkylborane by hydrogen peroxide

You will not be required to know this part of the mechanism for this course, but further information is available in the links below.

The hydroboration reaction is among the few simple addition reactions that proceed cleanly in a syn fashion, i.e., the boron and the hydrogen end up on the same side. As noted above, this is a single-step reaction. Since the bonding of the double bond carbons to boron and hydrogen is concerted, it follows that the geometry of this addition must be syn. Furthermore, rearrangements are unlikely inasmuch as a discrete carbocation intermediate is never formed.

Since the hydroboration procedure is most commonly used to hydrate alkenes in an anti-Markovnikov fashion, we also need to know the stereoselectivity of the second oxidation reaction, which substitutes a hydroxyl group for the boron atom. Independent study has shown this reaction takes place with retention of configuration so the overall addition of water is also syn.

What are the products of these following reactions?

Draw the structural formulas for the alcohols that result from hydroboration-oxidation of the alkenes shown.

If you need a reminder, see the section on naming alkenes.

Write out the reagents or products (A–D) shown in the following reaction schemes. 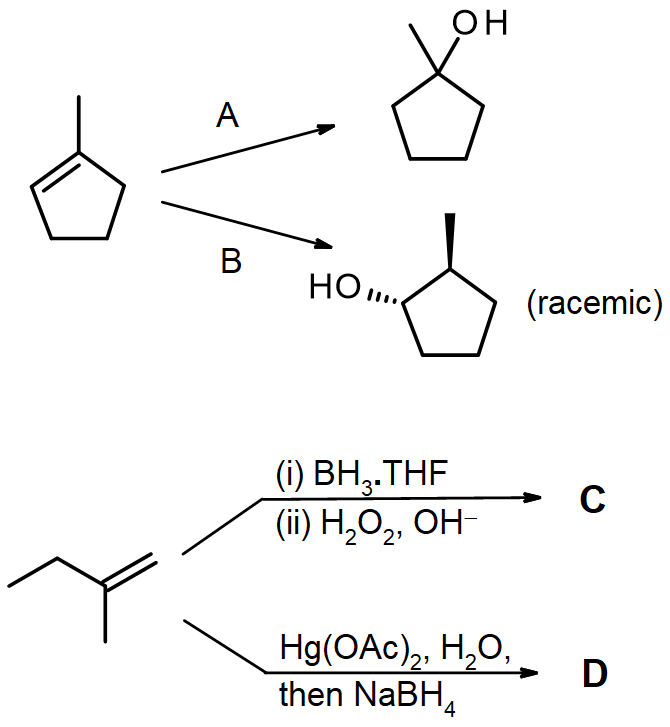 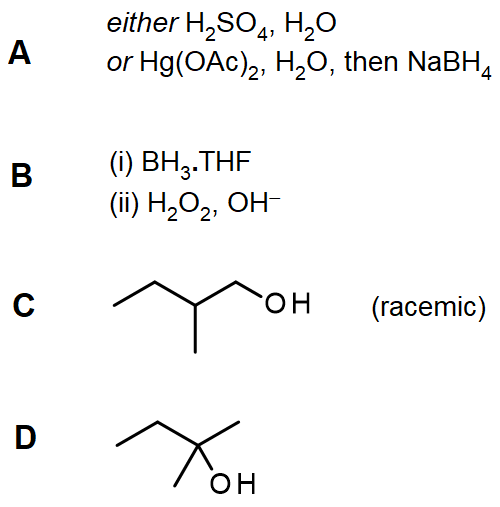 10.8.3. Anti-Markovnikov addition of HBr to alkynes

Most hydrogen halide reactions with alkynes occur in a Markovnikov-manner in which the halide attaches to the most substituted carbon since it is the most positively polarized. A more substituted carbon has more bonds attached to 1) carbons or 2) electron-donating groups such as Fluorine and other halides. However, there are two specific reactions among alkynes where anti-Markovnikov reactions take place: the radical addition of HBr and hydroboration-oxidation reactions. For alkynes, an anti-Markovnikov addition takes place on a terminal alkyne, an alkyne on the end of a chain.

The Br of the Hydrogen Bromide (H-Br) attaches to the less substituted 1-carbon of the terminal alkyne shown below in an anti-Markovnikov manner while the Hydrogen proton attaches to the second carbon. As mentioned above, the first carbon is the less substituted carbon since it has fewer bonds attached to carbons and other substituents. The H-Br reagent must also be reacted with heat or some other radicial initiator such as a peroxide in order for this reaction to proceed in this manner. This presence of the radical or heat leads to the anti-Markovnikov addition since it produces the most stable reaction.  The mechanism for this reaction will be covered later.

The product of a terminal alkyne that is reacted with a peroxide (or light) and H-Br is a 1-bromoalkene.

Regioselectivity: The Bromine can attach in a syn or anti manner which means the resulting alkene can be both cis and trans. Syn addition is when both Hydrogens attach to the same face or side of the double bond (i.e. cis) while the anti addition is when they attach on opposite sides of the bond (trans).

10.8.4. Anti-Markovnikov addition of H2O to alkynes

Boranes such as dicyclohexylborane react with alkynes to give aldehydes, after oxidation of the intermediate borane.

Step 1: Hydroboration of terminal alkynes reacts in an anti-Markovnikov fashion in which the boron attacks the less substituted carbon which is the least hindered. It is a stereospecific reaction where syn addition is observed as the hydroboration occurs on the same side of the alkyne and results in cis stereochemistry. However, a bulky borane reagent needs to be used to stop at the addition the alkenyl-borane stage. Otherwise, a second hydroboration will occur. Common sterically hindered borane reagents include dicyclohexylborane (written as Cy2BH) and diisoamyl borane (written as Sia2BH).

Step 2: Oxidation is the next step that occurs. The resulting alkenylborane is oxidized to an enol due to the reaction with hydrogen peroxide in a basic solution such as aqueous sodium hydroxide. As we saw in section 10.5, an enol will go rapid tautomerization and rearrange into a carbonyl (C=O) compound as the product – in this case, in basic solution.

For additional information on hydroboration oxidation: See Hydroboration-oxidation in Wikipedia

1. What is the product of this reaction?

2. What process causes the conversion of a vinyl alcohol to an aldeyde and what are some of its distinct features?

3. True or False: Only cis products are observed in radical H-Br additions to terminal alkynes.

4. Explain why a bulky borane reagent is necessary for hydroboration oxidation reactions.

1. Don’t be confused by the borane reagent! Just remember, anytime there is a bulky borane reagent reacting with a terminal alkyne, the hydroboration oxidation reaction will occur and be proceeded by tautomerism which will produce an aldeyde as shown below.

2. The interconversion of an enol or vinyl alcohol to an aldehyde is called tautomerism and it is very distinct since it is a spontaneous reaction that proceeds very quickly.

3. False. Both cis and trans products are produced as both syn and anti additions are observed.

4. If a small borane reagent is utilized, both pi bonds will be used and a second hydroboration will occur. This will break the double bond of the alkene and the aldehyde product will not be formed.