Alkenes undergo addition reactions. Often, they add a proton to one end of the double bond and another group to the other end. These reactions happen in slightly different ways, however.

Alkenes are reactive because they have a high-lying pair of π-bonding electrons. These electrons are loosely held, being high in energy compared to σ-bonds. The fact that they are not located between the carbon nuclei, but are found above and below the plane of the double bond, also makes these electrons more accessible.

Hydrogen halides such as H-Br and H-Cl are suitable electrophiles for a simple addition to an alkene.  Since the halogen is much more electronegative than the hydrogen, the H-X bond is quite polarized, with the H carrying a partial positive charge (δ+) and serving as the electrophilic atom.  In this example, HCl adds to but-1-ene to form racemic 2-chlorobutane:

The mechanism begins with an electrophilic addition elementary step, where the alkene forms a new sigma bond to the electrophilic H, and breaks the H-Cl bond displacing Cl¯.  The second elementary step is a coordination step, where the chloride ion attacks the carbocation to form a second sigma bond.  Note that overall we have lost one pi bond, but gained a sigma bond.  Notice that Markovnikov’s Rule is followed here, since the secondary carbocation formed is more stable than the alternative, which would have been primary.

Video on addition of HX to alkenes

The reaction of 2-methylpropene (or isobutylene) with HBr, as depicted above, is really a 2-step process.  Draw this mechanism again and in each of the two steps label both the nucleophile and the electrophile (so, that’s four labels).  Name the two elementary steps.

Draw a reaction progress diagram for the reaction of 2-methylpropene with hydrogen bromide.

Predict the rate law for the reaction of 2-methylpropene with hydrogen bromide.

Water can be added to an alkene in the presence of an acid catalyst, to produce an alcohol.

Water is not a strong enough electrophile to add an H+ directly to an alkene, but H3O+ is.  The H3O+ is. formed when sulfuric acid dissociates in water: 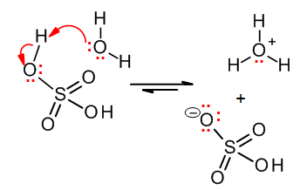 The alkene then reacts with the H3O+ in the electrophilic addition elementary step.  The resultant carbocation is reactive, and water then easily reacts as a nucleophile to perform the coordination step.  A final acid-base step, regenerating the H3O+ catalyst, produces the alcohol product.