To afford the observed product, the net reaction is addition of the hydrogen atom in HBr, to the doubly bonded carbon atom in the alkene bearing the greater number of hydrogen atoms.

The key point in the electrophilic addition reaction above is to notice that, if the starting alkene is asymmetrical, there are two possible courses that could be followed, depending on which of the two alkene carbons forms the new sigma bond in the first step.

This important regiochemical principle is nicely illustrated by a simple electrophilic addition that is commonly carried out in the organic laboratory: the conversion of an alkene to an alkyl bromide by electrophilic addition of HBr to the double bond.   Let’s look at a hypothetical addition of HBr to 2-methylbut-2-ene, pictured below.  Two different regiochemical outcomes are possible: 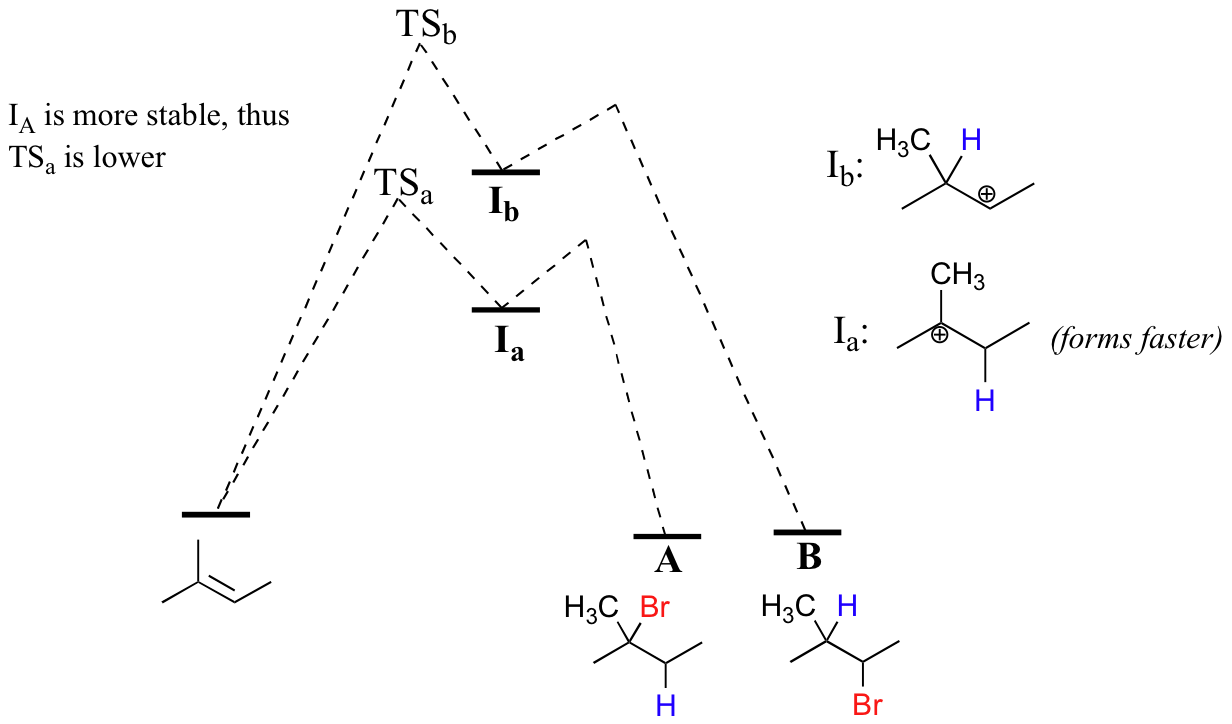 Because the protonation step is the rate determining step for the reaction, the tertiary alkyl bromide A will form much faster than the secondary alkyl halide B, and thus A will be the predominant product observed in this reaction.  This is a good example of a non-enzymatic organic reaction that is highly regiospecific.

In the example above, the difference in carbocation stability can be accounted for by the electron-donating effects of the extra methyl group on one side of the double bond. It is generally observed that, in electrophilic addition of acids (including water) to asymmetrical alkenes, the more substituted carbon is the one that ends up bonded to the heteroatom of the acid, while the less substituted carbon is protonated.

This rule of thumb is known as Markovnikov’s rule, after the Russian chemist Vladimir Markovnikov who proposed it in 1869.

While it is useful in many cases, Markovnikov’s rule does not apply to all possible electrophilic additions.  It is more accurate to use the more general principle that has already been stated above:

When an unsymmetrical alkene undergoes electrophilic addition, the product that predominates is the one that results from the more stable of the two possible carbocation intermediates.

How is this different from Markovnikov’s original rule?  Consider the following hypothetical reaction, which is similar to the HBr addition shown above except that the six methyl hydrogens on the left side of the double bond have been replaced by highly electron-withdrawing fluorines.

Now when HBr is added, it is the less substituted carbocation that forms faster in the rate-determining protonation step, because in this intermediate the carbon bearing the positive charge is located further away from the electron-withdrawing, cation-destabilizing fluorines.  As a result, the predominant product is the secondary rather than the tertiary bromoalkane.  This would be referred to as an ‘anti-Markovnikov’ addition product, because it ‘breaks’ Markovnikov’s rule.

Predict the product of the following reaction: