Chemists need a convenient way to distinguish one stereoisomer from another.  The Cahn-Ingold-Prelog system is a set of rules that allows us to unambiguously define the stereochemical configuration of any stereocenter, using the designations ‘R ’ (from the Latin rectus, meaning right-handed) or ‘ S ’ (from the Latin sinister, meaning left-handed).The rules for this system of stereochemical nomenclature are, on the surface, fairly simple.

Rules for assigning an R/S designation to a chiral center

1: Assign priorities to the four substituents, with #1 being the highest priority and #4 the lowest. Priorities are based on the atomic number.

We’ll use the 3-carbon sugar glyceraldehyde as our first example.  The first thing that we must do is to assign a priority to each of the four substituents bound to the chiral center. We first look at the atoms that are directly bonded to the chiral center: these are H, O (in the hydroxyl), C (in the aldehyde), and C (in the CH2OH group).

Two priorities are easy: hydrogen, with an atomic number of 1, is the lowest (#4) priority, and the hydroxyl oxygen, with atomic number 8, is priority #1.  Carbon has an atomic number of 6.  Which of the two ‘C’ groups is priority #2, the aldehyde or the CH2OH?  To determine this, we move one more bond away from the chiral center: for the aldehyde we have a double bond to an oxygen, while on the CH2OH group we have a single bond to an oxygen.  If the atom is the same, double bonds have a higher priority than single bonds.  Therefore, the aldehyde group is assigned #2 priority and the CH2OH group the #3 priority.

With our priorities assigned, we look next at the #4 priority group (the hydrogen) and see that it is pointed back away from us, into the plane of the page – thus step 4a from the procedure above applies. Then, we trace a circle defined by the #1, #2, and #3 priority groups, in increasing order. The circle is clockwise, which by step 4a tells us that this carbon has the ‘R’ configuration, and that this molecule is  (R)-glyceraldehyde.  Its enantiomer, by definition, must be (S)-glyceraldehyde.

Next, let’s look at one of the enantiomers of lactic acid and determine the configuration of the chiral center.  Clearly, H is the #4 substituent and OH is #1.  Owing to its three bonds to oxygen, the carbon on the acid group takes priority #2, and the methyl group takes  #3.  The #4 group, hydrogen, happens to be drawn pointing toward us (out of the plane of the page) in this figure, so we use step 4b:  The circle traced from #1 to #2 to #3 is clockwise, which means that the chiral center has the S configuration. 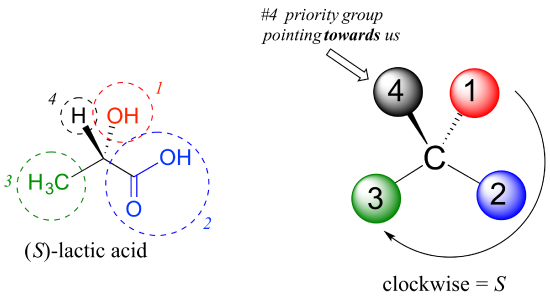 The drug thalidomide is an interesting – but tragic – case study in the importance of stereochemistry in drug design.  First manufactured by a German drug company and prescribed widely in Europe and Australia in the late 1950’s as a sedative and remedy for morning sickness in pregnant women, thalidomide was soon implicated as the cause of devastating birth defects in babies born to women who had taken it. Thalidomide contains a chiral center, and thus exists in two enantiomeric forms. It was marketed as a racemic mixture: in other words, a 50:50 mixture of both enantiomers.

The hydrogen is shown pointing away from us, and the prioritized substituents trace a clockwise circle: this is the R enantiomer of thalidomide. The other enantiomer, of course, must have the S configuration.

Although scientists are still unsure today how thalidomide works, experimental evidence suggests that it was actually the R enantiomer that had the desired medical effects, while the S enantiomer caused the birth defects. Even with this knowledge, however, pure (R)-thalidomide is not safe, because enzymes in the body rapidly interconvert the two enantiomers.

As a historical note, thalidomide was never approved for use in the United States.  This was thanks in large part to the efforts of Dr. Frances Kelsey, a Food and Drug officer who, at peril to her career, blocked its approval due to her concerns about the lack of adequate safety studies, particularly with regard to the drug’s ability to enter the bloodstream of a developing fetus.  Unfortunately, though, at that time clinical trials for new drugs involved widespread and unregulated distribution to doctors and their patients across the country, so families in the U.S. were not spared from the damage caused.

1. Determine the stereochemical configurations of the chiral centers in the biomolecules shown below.

2. Should the (R) enantiomer of malate have a solid or dashed wedge for the C-O bond in the figure below? 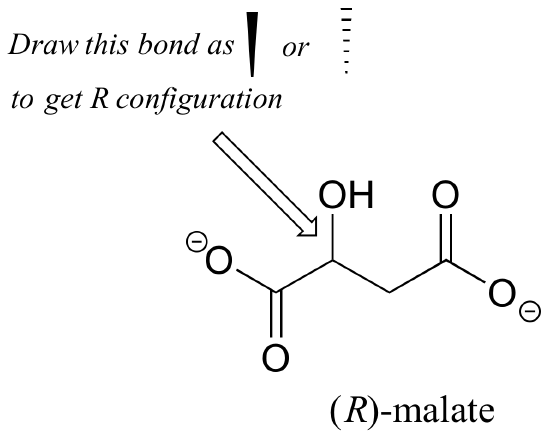 The C-O bond should be drawn as a dash to get the R configuration.

The C-O bond should be drawn as a dash to get the R configuration.

A system that is easy to use and which is based on the sequence rules already described for the [latex] R [/latex],[latex] S [/latex] system works as follows:

This system is especially useful for oximes, which have the structural feature [latex] \ce{-C=N-OH} [/latex]. The two possible configurations at the double bond in the oxime of ethanal are [latex] 11 [/latex] and [latex] 12 [/latex]: 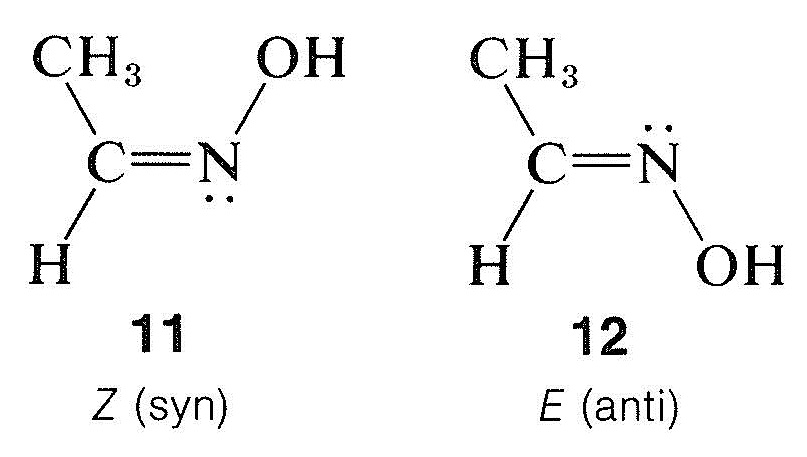