For our first example of chemical reactivity, let’s look at a very simple reaction that occurs between hydroxide ion and hydrochloric acid:

This is an acid-base reaction: a proton is transferred from HCl, the acid, to hydroxide, the base. The product is water (the conjugate acid of hydroxide)  and chloride ion (the conjugate base of HCl). You have undoubtedly seen this reaction before in general chemistry.  Despite its simplicity (and despite the fact that the reactants and products are inorganic rather than organic), this reaction allows us to consider for the first time many of the fundamental ideas of organic chemistry that we will be exploring in various contexts throughout this text.

The hydrogen atom in HCl, on the other hand, has low electron density: it is electron-poor.  As you might expect, something that is electron-rich is attracted to something that is electron-poor.  As hydroxide and HCl move closer to each other, a lone pair of electrons on the electron-rich hydroxide oxygen is attracted by the electron-poor proton of HCl, and electron movement occurs towards the proton.  The two electrons in the hydrogen-chlorine s bond are repelled by this approaching hydroxide electron density, and therefore move even farther away from the proton and towards the chlorine nucleus.  The consequence of all of this electron movement is that the hydrogen-chlorine bond is broken, as the two electrons from that bond completely break free from the 1s orbital of the hydrogen and become a lone pair in the 3p orbital of a chloride anion.

At the same time that the hydrogen-chlorine bond is breaking, a new sigma bond forms between hydrogen and oxygen, containing the two electrons that previously were a lone pair on hydroxide.  The result of this bond formation is, of course, a water molecule.

The first arrow originates at one of the lone pairs on the hydroxide oxygen and points to the ‘H’ symbol in the hydrogen bromide molecule, illustrating the ‘attack’ of the oxygen lone pair and subsequent formation of the new hydrogen-oxygen bond.  The second curved arrow originates at the hydrogen-bromine bond and points to the ‘Br’ symbol, indicating that this bond is breaking – the two electrons are ‘leaving’ and becoming a lone pair on bromide ion.

Draw electron movement arrows to illustrate the acid-base reaction between acetic acid, CH3COOH, and ammonia, NH3.  Draw out the full Lewis structures of reactants and products.

The reaction between hydroxide and HCl is a simple example of a Brønsted acid-base (proton transfer) reaction, and we will look at this reaction type in much more detail in Chapter 7.  For now, however, let’s continue our introduction to the basic ideas of organic reactivity with a real organic reaction.  Consider what might happen if a hydroxide ion encounters a chloromethane molecule instead of HCl.  The hydroxide is still an electron-rich species, and thus might again be expected to act as a base and ‘attack’ a hydrogen. But in this case, the three hydrogens on the second reactant are not very electron-poor, as they are bound not to chlorine but to carbon, which is not very electronegative. However, there is a relatively electron-poor atom in chloromethane: the carbon.

Because of the relative electronegativity of chlorine, the carbon-chlorine bond is polar. It stands to reason that a lone pair of electrons on the electron-rich hydroxide oxygen will be attracted to the electron-poor carbon.

However, in order for a new bond to form between the hydroxide oxygen and the carbon, one of the bonds already on the carbon must break – otherwise, there will be five bonds to carbon and the octet rule will be violated. The C-Cl bond breaks as the new C-O bond forms, and the chlorine leaves along with its two electrons.

The reaction mechanism we see here is called a nucleophilic substitution, and is abbreviated SN2. The ‘substitution’ term is easy to understand: just recognize how hydroxide substitutes for bromine as the fourth bond to the central carbon.  The term ‘nucleophilic’ means ‘nucleus-loving’ and refers to the electron-rich species, the hydroxide oxygen.  This oxygen is a nucleophile: it is attracted to the (positively-charged) nucleus of the central carbon atom, and ‘attacks’ with a lone pair of electrons to form a new covalent bond. The number ‘2’ refers to the fact that this reaction is bimolecular, and has second order kinetics.

The carbon is referred to in this context as an electrophile.  The chlorine, because it leaves with its two electrons to become a chloride ion, is termed a leaving group.  Notice that the three players in a nucleophilic substitution reaction – the nucleophile, the electrophile, and the leaving group – correspond conceptually to the three players in an acid-base reaction: the base, the acidic proton, and the conjugate base of the acid, respectively.

In many ways, the proton transfer process of an acid-base reaction can be thought of as simply a special kind of nucleophilic substitution reaction, one in which  the electrophile is a hydrogen rather than a carbon.

In each of the reactions below, identify the nucleophile, electrophile, and leaving group (assume in each case that a basic group is available to accept a hydrogen from the nucleophilic atom). 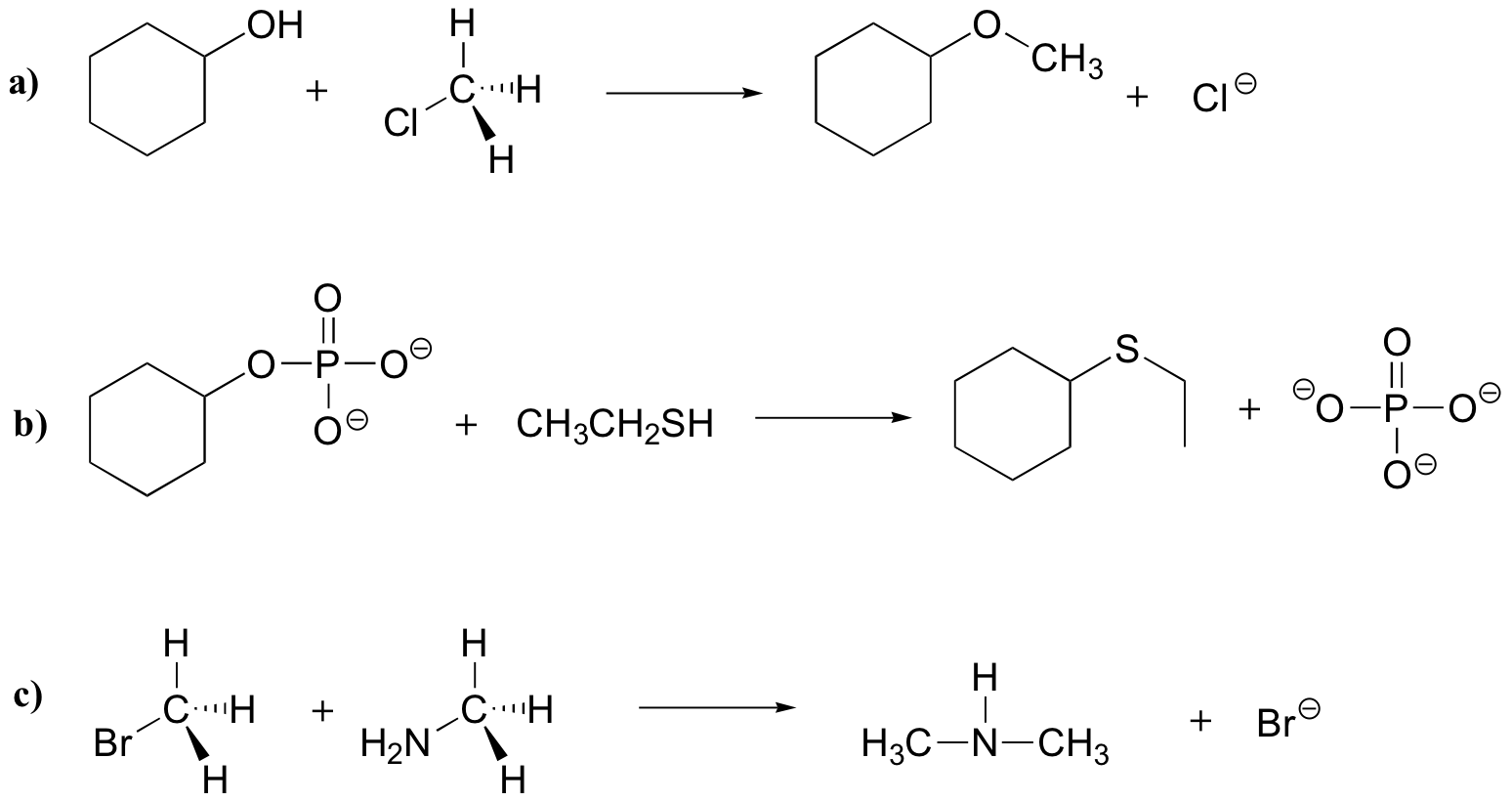 Reaction  mechanisms describe not only the electron movement that occurs in a chemical reaction, but also the order in which bond-breaking and bond-forming events occur.  Nucleophilic substitution reactions, for example, can occur by a second, alternative mechanism that is different from the mechanism above in terms of the order of events.  A simple illustration is provided by the reaction of hydroxide with a tertiary alkyl chloride, such as 2-chloro-2-methyl propane.

Unlike the chloromethane plus hydroxide reaction, in which the substitution process took place in a single, concerted step, this mechanism involves two separate steps.  The leaving group, chloride anion, leaves first, before the hydroxide nucleophile approaches.

What is left behind after the leaving group leaves is a carbocation: a planar, sp2-hybridized carbon center with three bonds, an empty 2pz orbital, and a full positive charge. In the language of organic mechanisms, this carbocation is referred to as a reaction intermediate.

A positively charged carbon is (obviously) very electron-poor, and thus the reactive intermediate is a powerful electrophile.  It is quickly attacked by the hydroxide nucleophile to form the substitution product.

We will see later that other products are possible for this combination of reactants, but we will not worry about that for now.

Pathway intermediates are often relatively stable compounds, whereas reaction intermediates (such as the carbocation species that plays a part in the two-step nucleophilic substitution) are short-lived, high energy species.

This mechanism is referred to by the abbreviation SN1: a nucleophilic substitution that is unimolecular, with first order kinetics.

Although nucleophilic substitutions at carbon are not terribly common in biochemistry, there are nevertheless some very important biological examples.  One of these is DNA methylation.  In the reaction below, the nucleophile is an amino nitrogen on adenosine (one of the four DNA building blocks).  The electrophile is a methyl carbon on a molecule called S-adenosylmethionine (usually abbreviated ‘SAM’). 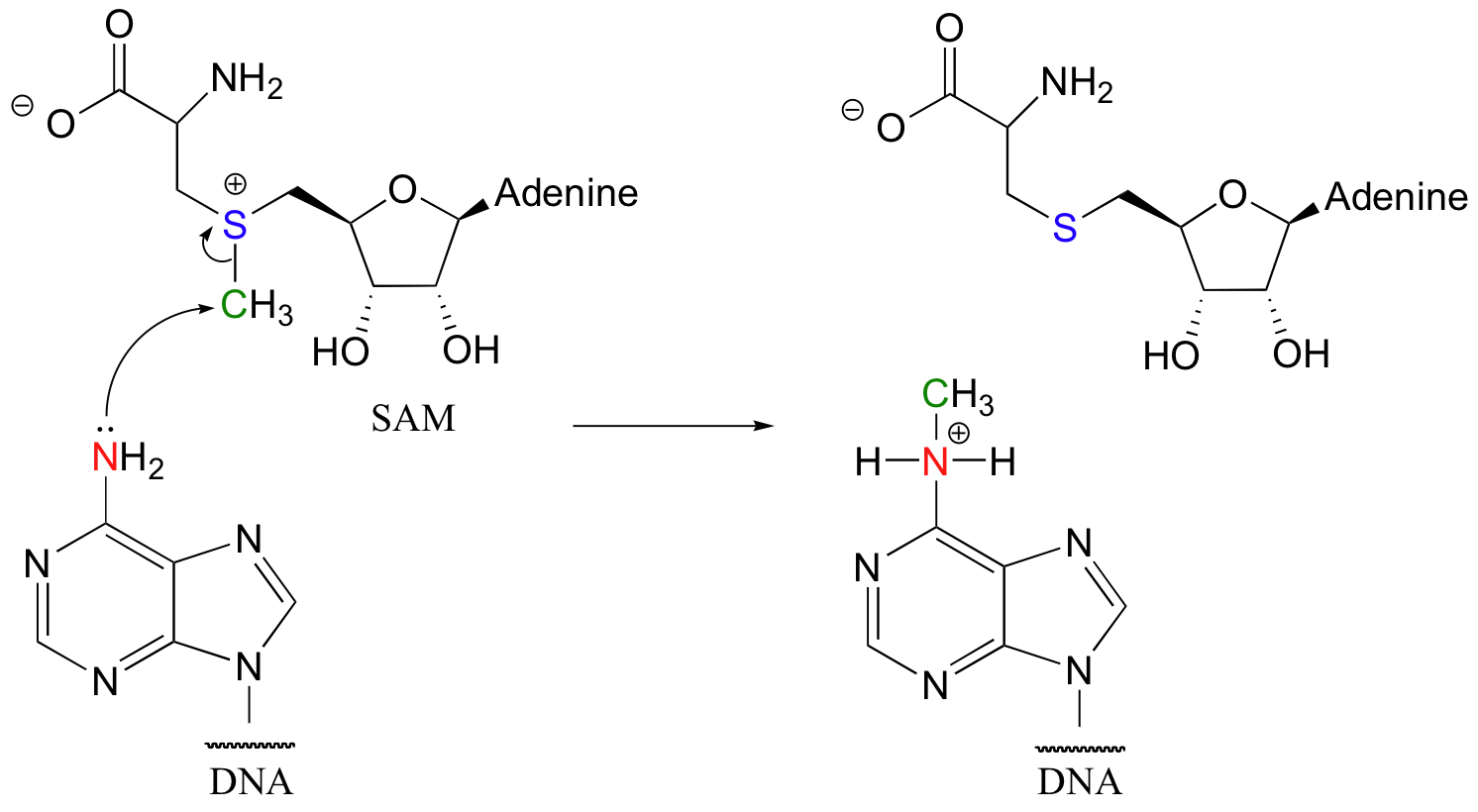 Notice that the leaving group in this reaction is a neutral sulfide, and that this is a single-step nucleophilic substitution (SN2), like our chloromethane example.

We will have much more to say about nucleophilic substitutions, nucleophiles, electrophiles, and leaving groups in chapter 8, and we will learn why some substitutions occur in a single step and some occur in two steps with a carbocation intermediate.  For now, however, we need to review the convention of energy diagrams and some of the basic concepts of thermodynamics and kinetics in order to continue our introduction to organic reactivity.