In electrophilic reactions, pi-bonded electrons act as bases and nucleophiles. It is relatively simple to understand how the lone pair of electrons on a thiol group could be nucleophilic – they are free and unbonded, a clear case of electron richness.  But the pi bonds of alkenes?  These electrons are not free, they are already involved in a bond!

The key to understanding electrophilic reactions is to consider again the geometry of alkene groups and the orbitals that overlap to form the pi bond. Recall that the two carbons in an alkene group are both sp2 hybridized, meaning that each carbon has three sp2 hybrid orbitals extending out in the same plane, and a single, unhybridized p orbital perpendicular to that plane – one lobe above the plane, one lobe below.

The unhybridized p orbitals on the two alkene carbons overlap, in a side-by-side fashion, to form the pi bond, which protrudes above and below the plane formed by the sigma bonds.  The two electrons shared in this pi bond are, on average, further away from the carbon nuclei than the sigma-bonded electrons, and thus are held less tightly.  This in turn means that less energy is required to pull the pi-bonded electrons out of their orbital – they are, in other words, more reactive.  Now, imagine that an electrophile approaches an alkene. The electrophile, because it is electron-poor,  may be able to pull the pi-bonded alkene electrons out of their bond and into one of its empty orbitals.

If this happens, a new sigma bond is formed between one of the carbons and the electrophile (and the carbon, which was sp2-hybridized when it was part of the alkene, is now sp3-hybridized).  The other alkene carbon, which lost the pi electrons, is still sp2-hybridized, but it now bears a positive charge because its unhybridized 2pz orbital is empty.  But it won’t stay empty for long – a carbocation is generally a very reactive, unstable intermediate.  In an electrophilic addition reaction, a nearby nucleophile (often water) will quickly donate a pair of electrons to form a new sbond, and with four sigma bonds the carbon will change to sp3 hybridization.

The first step in an electrophilic addition, in which the pi electrons in an alkene break away to attack an electrophile, is slower than the second step (coordination), in which a nucleophile attacks the positively charged intermediate.

In other words, the first step (electrophilic addition) is the rate-determining step (RDS). 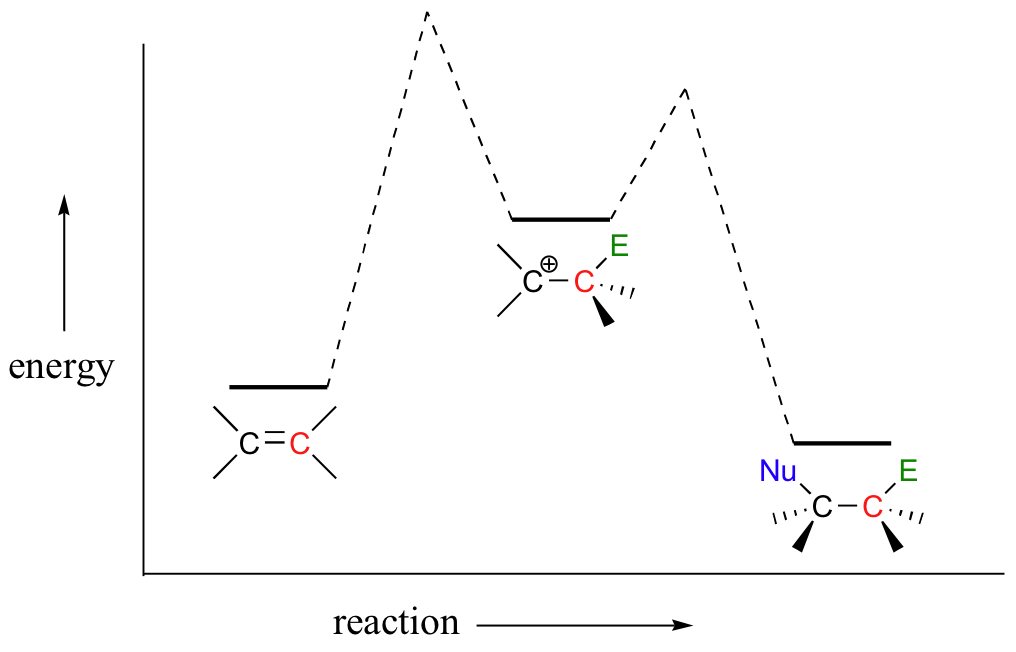 Draw the two transition states of the generalized electrophilic addition reaction shown above.

In most electrophilic addition examples in this course, the starting alkene and the added electrophile are both achiral, but often the product is chiral.  Since there is no “pixie dust” at the start, there cannot be any at the end – so the chiral products of such electrophilic additions are racemic.
Licenses and Attributions
CC licensed content, Shared previously