Before we consider in detail the reactivity of aldehydes and ketones, we need to look back and remind ourselves of what the bonding picture looks like in a carbonyl.  Carbonyl carbons are sp2 hybridized, with the three sp2 orbitals forming soverlaps with orbitals on the oxygen and on the two carbon or hydrogen atoms.  These three bonds adopt trigonal planar geometry.  The remaining unhybridized 2p orbital on the central carbonyl carbon is perpendicular to this plane, and forms a ‘side-by-side’ pbond with a 2p orbital on the oxygen.

The carbon-oxygen double bond is polar: oxygen is more electronegative than carbon, so electron density is higher on the oxygen side of the bond and lower on the carbon side.  Recall that bond polarity can be depicted with a dipole arrow, or by showing the oxygen as holding a partial negative charge and the carbonyl carbon a partial positive charge.

A third way to illustrate the carbon-oxygen dipole is to consider the two main resonance contributors of a carbonyl group: the major form, which is what you typically see drawn in Lewis structures, and a minor but very important contributor in which both electrons in the pbond are localized on the oxygen, giving it a full negative charge.  The latter depiction shows the carbon with an empty 2p orbital and a full positive charge.The result of carbonyl bond polarization, however it is depicted, is straightforward to predict. The carbon, because it is electron-poor, is an electrophile: it is a great target for attack by an electron-rich nucleophilic group. Because the oxygen end of the carbonyl double bond bears a partial negative charge, anything that can help to stabilize this charge by accepting some of the electron density will increase the bond’s polarity and make the carbon more electrophilic. Very often a general acid group serves this purpose, donating a proton to the carbonyl oxygen. 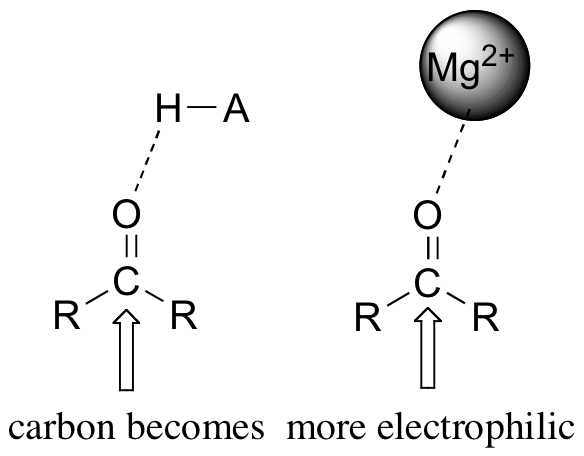 The same effect can also be achieved if a Lewis acid, such as a magnesium ion, is located near the carbonyl oxygen.Unlike the situation in a nucleophilic substitution reaction, when a nucleophile attacks an aldehyde or ketone carbon there is no leaving group – the incoming nucleophile simply ‘pushes’ the electrons in the pi bond up to the oxygen.

Alternatively, if you start with the minor resonance contributor, you can picture this as an attack by a nucleophile on a carbocation.

After the carbonyl is attacked by the nucleophile, the negatively charged oxygen has the capacity to act as a nucleophile.  However, most commonly the oxygen acts instead as a base, abstracting a proton from a nearby acid group in the solvent or enzyme active site.

As a result of the dipole shown in the resonance structures, polar reagents such as LiAlH4 and NaBH4 (hydride reagents) or R’MgX (Grignard reagent) will reduce the carbonyl groups, and ultimately convert unsaturated aldehydes and ketones into unsaturated alcohols. Since these reagents are extremely basic, their addition reactions are irreversible.

With strong nucleophiles, direct nucleophilic attack of the electrophilic carbon takes place. As the nucleophile approaches the electrophilic carbon, two valence electrons from the nucleophile form a covalent bond to the carbon. As this occurs, the electron pair from the pi bond transfers completely over to the oxygen which produces the intermediate alkoxide ion. This alkoxide ion, with a negative charge on oxygen is susceptible to protonation from a protic solvent like water or alcohol, giving the final addition reaction.

Under acidic conditions, protonation of the carbonyl oxygen takes place. Then nucleophilic attack by the nucleophile finishes the addition reaction. This type of reaction works best when the reagent being used is a very mildly basic nucleophile.

Notice that in the course of the nucleophilic addition pictured above, the hybridization of the carbonyl carbon changes from sp2 to sp3, meaning that the bond geometry changes from trigonal planar to tetrahedral.  It is also important to note that if the starting carbonyl is asymmetric (in other words, if the two R groups are not equivalent), then a new stereocenter has been created. The configuration of the new stereocenter depends upon which side of the carbonyl plane the nucleophile attacks from.

If the reaction is catalyzed by an enzyme, the stereochemistry of addition is tightly controlled, and leads to one specific stereoisomer – this is because the nucleophilic and electrophilic substrates are bound in a specific positions within the active site, so that attack must occur specifically from one side.  If, however, the reaction occurs uncatalyzed in solution, then either side of the carbonyl is equally likely to be attacked, and the result will be a 50:50 racemic mixture. 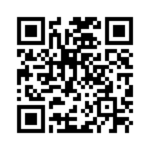 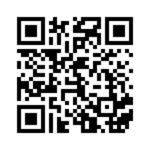