The Wittig reaction or Wittig olefination is a chemical reaction of an aldehyde or ketone with a triphenyl phosphonium ylide (often called a Wittig reagent) to give an alkene and triphenylphosphine oxide.

The Wittig reaction was discovered in 1954 by Georg Wittig, for which he was awarded the Nobel Prize in Chemistry in 1979. It is widely used in organic synthesis for the preparation of alkenes.

The reaction works for a wide variety of R groups, and with both aldehydes and ketones, and with simple alkyl or aryl groups it generally gives mainly the Z- alkene product, though if the R groups are similar it may give E/Z mixtures.  The driving force is the formation of a the highly stable triphenylphosphine oxide (Ph3P=O).

This involves an initial nucleophilic addition step giving betaine 3 (=4), followed by a coordination step to form a four-membered ring 5 (called an oxephosphetane), which decomposes to the product 7 via a ring rearrangement reaction.

Wittig reagents are usually prepared from a phosphonium salt, which is in turn prepared by the reaction of triphenylphosphine with an alkyl halide via an SN2 reaction. The alkylphosphonium salt is deprotonated with a strong base such as n-butyllithium:

2) Deprotonation (for simplicity the butyllithium has been written as if it were ionic, which it is not):

Structure of the Wittig reagent

One of the simplest ylides is methylenetriphenylphosphorane (Ph3P=CH2).  The Wittig reagent may be written in the phosphorane form or the ylide form:

The ylide form is a significant contributor, and the carbon is nucleophilic. It has been noted that dipolar phosphorus compounds are stabilized by p-d bonding. This bonding stabilization extends to carbanions adjacent to phosphonium centers.  An ylide is defined as a compound with opposite charges on adjacent atoms, both of which have complete octets.

Simple phosphoranes (Wittig reagents) are reactive towards air and water, so they are usually handled under nitrogen.  These will react easily with most aldehydes and ketones.

However, phosphoranes some are stabilized by electron-withdrawing groups, as in Ph3P=CHCO2R and Ph3P=CHPh. These ylides are sufficiently stable to be sold commercially

From the phosphonium salts, these reagents are formed more readily, requiring only a moderate base such as NaOH, and they are usually more air-stable. Stabilized Wittig reagents are less reactive than simple ylides, and so they usually fail to react with ketones, and they usually give rise to an E-alkene product when they react, rather than the more usual Z-alkene.

The Wittig reagent itself is usually made from a primary alkyl halide via an SN2 reaction. The SN2 reaction of triphenylphosphine with most secondary halides is inefficient. For this reason, Wittig reagents are rarely used to prepare tetrasubstituted alkenes. However, the Wittig reagent can tolerate many other variants. It may contain alkenes and aromatic rings, and it is compatible with ethers and even ester groups. Even C=O and nitrile groups can be present if conjugated with the ylide- these are the stabilized ylides mentioned above.

Examples of the Wittig reaction

Because of its reliability and wide applicability, the Wittig reaction has become a standard tool for synthetic organic chemists.  A principal advantage of alkene synthesis by the Wittig reaction is that the location of the double bond is absolutely fixed, in contrast to the mixtures often produced by classical E1 or E2 elimination reactions.

The most popular use of the Wittig reaction is for the introduction of a methylene group using methylenetriphenylphosphorane (Ph3P=CH2). Using this reagent even a sterically hindered ketone such as camphor can be converted to its methylene derivative (see example above).

1) Please write the product of the following reactions. 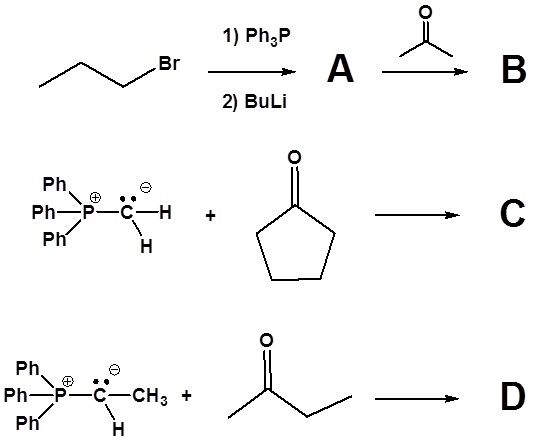 2) Please indicate the starting material required to produce the product. 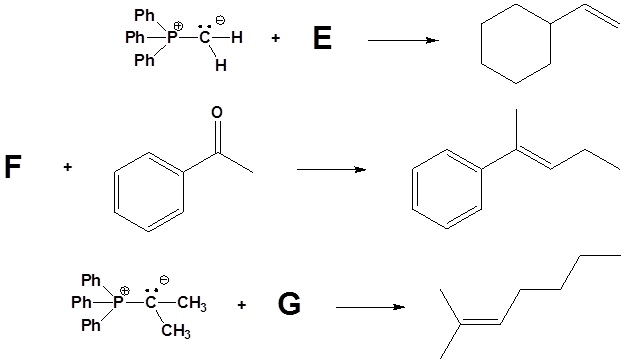 3) Please draw the structure of the oxaphosphetane which is made during the mechanism of the reaction given that produces product C.

4) Please draw the structure of the betaine which is made during the mechanism of the reaction given that produces product D.

6)  It has been shown that reacting and epoxide with triphenylphosphine forms an alkene. Please propose a mechanism for this reaction.  Review the section on epoxide reactions if you need help. 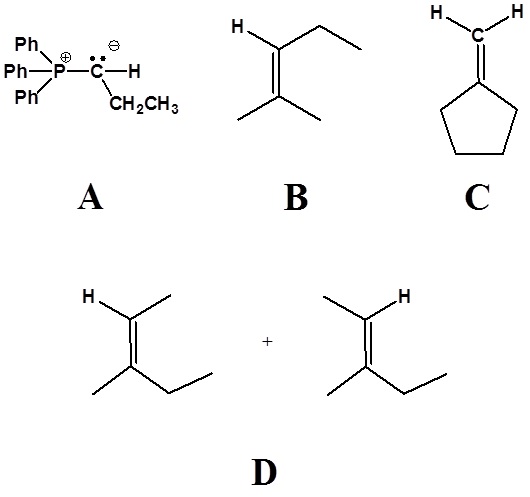 Nucleophillic attack on the carbonyl

Formation of a 4 membered ring

Formation of the alkene

6) Nucleophillic attack on the epoxide 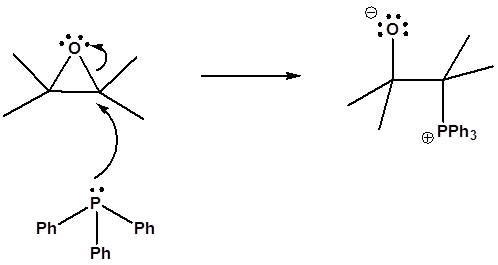 Formation of a 4 membered ring

Formation of the alkene