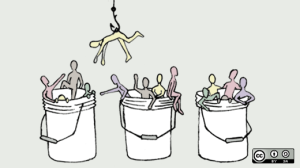 As a woman in open source, I have found that the values of community, open development, and flat organizational structure appeal equally to both men and women. The ability of local organizers to freely define what type of culture they are building allows them to adapt in order to appeal to the surrounding culture, while striving to improve access.

The gender balance in the field of design is the opposite of the FOSS community, because the majority of visual artists are female. In art, gender is discussed openly as an aspect of the theory used to explain visual communication. For example, part of the typical peer-review process is critique, the goal of which is to contextualize visual communication by discussing the culture, gender, identity, economics, and psychological factors which influenced the artwork, so the artist can understand how they personally fit into the community in which they practice. I began as an outsider to both technology and the FOSS community, so it was both interesting and frustrating to realize that much of the communication and organization of FOSS communities was framed without acknowledgement to the diversity of communication styles and the backgrounds of potential community members.

In 2011, I was accepted to the OPW to work on high contrast icon themes for the GNOME desktop. This started my deep dive into the fascinating world of Linux. Having access to an open code base, sharing my work in the open, and receiving constant feedback from the community was overwhelming at first. The learning curve was steep, but the excitement I felt about having access to open knowledge, the support of a community dedicated to sharing knowledge freely, and to pushing the boundaries of what we did kept me coming back for more even on the most frustrating days.

My OPW internship brought me into the FOSS community. It also taught me to talk freely about my experiences as a woman in the computer science field, and sometimes that means knocking on the same doors over and over until you are let in. Sometimes it means acknowledging that communication styles needs to shift in order to emphasize inclusion. Other times it means speaking up about what your community values and how to allocate resources to benefit all participants equally. OPW was the first door to open for me, and my involvement showed me that persistence, hard work, and enthusiasm can bring success no matter who you are or where you start from.

As time went on I became involved in coding for GNOME. In 2012, I started to contribute to GNOME’s Documents application, which was the first application to be developed in the new GNOME 3 style. Because the style is still in its early stages, the themes and widgets are being prototyped in the applications before they are integrated into GTK+ (the widget library) and the standard desktop themes. Last summer I wrote my own GNOME application: a sound recorder for the desktop. I started by planning my code to fulfill the requirements of a series of mockups by a community member. I went on to code the application as a Google Summer of Code (GSoC) project.

During the initial development phase I worked with Reda Lazri (the original designer), Sebastian Dröge (a GStreamer core maintainer who mentored me), Hylke Bons, and Garrett LeSage (both of whom are community members and design for GNOME). GSoC allowed me to immerse myself in GNOME’s developer community and learn about the code base from core contributors.

When a fellow GNOME contributor, Jim Campbell, suggested that we start a group to focus on GNOME and GNU/Linux, I saw it as a way to give back to my community and work to increase diversity. The FOSS community in Chicago is small, and for the first year I was the only woman who attended our events. From the beginning we emphasized that our group was open to anyone who was interested in participating by adopting a code of conduct. As time went on our community began to grow and started to be more representative of the larger community here in the city. Engaging women has happened slowly but without any special intervention on our part.

We invite members to bring their projects to hackfests and share their knowledge by giving talks. People have come to work on GTK+ bindings for the Go programming language, documentation for Gedit, the fundraising campaign for MediaGoblin, and the website for the Open Science Framework, among other things. Talks have ranged from a recent SaltStack tutorial, which our members participated in using their own four-server demo environments running on server space donated by Rackspace—to talks on Wayland, Emacs, and personal data security. All of the projects and presentations center around the use of open source technologies. Our role as organizers is to encourage participation and free exchange of ideas and resources among participants.

Being a woman in computer science is both an exciting and challenging experience. To me it means being exposed to emerging technologies, solving new and difficult problems, and working to promote Free and Open Source Software (FOSS) in my local community.

I think that outreach can be successfully addressed using the same template as other questions in open source: by recognizing diversity as a key element of success, by facilitating transparency and equal access to knowledge, and by letting the community organize itself around a shared vision. Having women who are visibly engaged in and promoting involvement in the community seems to be one way to send a clear message that women can participate and succeed in FOSS.