“Piracy Gave Me A Future” by Daniel Starkey

Poverty traps its victims in intellectual dead zones. I don’t pirate games anymore, but when I needed it, it gave me access to the literature and artistic inspiration of my generation. 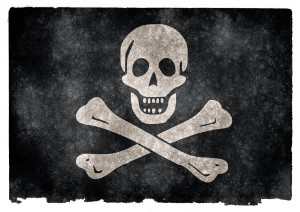 As a kid, I stole from everyone.

An unattended purse in a restaurant? Easy $5. Pokémon cards at Target? Pocketed. I even marked my best friends, waking up early on days I’d sleep over to rifle through their house to see what I could nab.

For a time, that thin justification worked. My family didn’t have any money, and when the Pokémon craze hit, I wanted in. Everyone else had massive collections, but all I had was a single starter deck I’d coaxed my babysitter into buying me (it was the one with Ninetails). Ashamed to pull out my paltry collection in front of the other kids, jealousy fueled me.

After each snag, I’d put on airs and feign ignorance long enough for suspicion to drop. I was, after all, just a kid. Few suspected how much I’d taken. Eventually, I stopped stealing, at least in such direct, aggressive ways. I didn’t outgrow that class consciousness, though. I knew when others had something I didn’t, and I was still jealous.

It was more than just jealousy, of course. Being poor and acutely aware of that fact as a child is a strange experience. You know enough to understand that there’s injustice, but you don’t yet know why or how it happened. Much less what you can do about it. I had a hard time understanding that it wasn’t my fault, and to a large degree not my mom’s either. Instead, it left me feeling less valuable than my other classmates. Their access to art, books, movies and games that I couldn’t afford left me feeling alone and confused: Was I somehow less deserving? So I exercised the one bit of agency I had in my life. I stole.

Things started to change for me in middle school. I was accepted into a charter school, founded with the purpose of lifting kids up out of poverty with education. We were required to learn Latin and wear school uniforms, but most of us were still from the inner city. Classmates often came from broken homes, and many, like me, didn’t know their fathers. I felt comfortable, oddly secure for the first time in my life.

That year was also the same that my mom got her first computer. On the few occasions she’d give up control of the PC, I’d scour the internet looking new things to learn. I had an insatiable appetite for ideas, though I’d spent most of my life with limited ways to feed it. Even before I started stealing Pokémon cards, I would often just sit down and read encyclopedias when I got the chance. I was desperate, starved for knowledge and culture.

The Internet said I didn’t have to be hungry; it was a tool that opened up the world. I didn’t need money to read books through Project Gutenberg, or search the web for answers to questions I’d always been afraid to ask. And, I soon discovered, I didn’t necessarily need money to play computer games either, so long as I was willing to pirate them.

In a way, downloading games didn’t feel that different from searching the web for information. The internet held out the promise of free and equal access to information, and piracy seemed like a natural extension of my quest for knowledge. I wanted to experience art and culture that spoke to me just as much as I wanted answers to my questions. And suddenly I could have them all: I was a nameless, faceless entity, free of the chains of my economic class. Piracy was freeing.

A couple years later, my mom had an accident and ended up taking more than a year off from work. Money got tighter than ever, and there was no way she could afford to replace her computer as it aged into obsolescence. Soon it was too out of date to play newer games, and I felt alone again, unable to participate in the culture building and growing around me. I wasn’t yet old enough to hold a job myself, and when I asked my mom for an allowance, she responded with a somber look that said, “With what money?” It wasn’t that she didn’t want to give me more—every parent does—she simply couldn’t. So I went back to stealing.

Before too long I had $300 as well as a spare monitor and case, enough to build a basic system. My first pirated PC game was Deus Ex. I’d heard about it a few times, and it sounded interesting. “A game about politics,” was how a friend pitched it to me, though it’s also been described as a “cyberpunk-themed action role-playing video game.” Within a few hours I had it running on my cobbled together PC, and it was a revelation.

Deus Ex was the first game I’d seen that listed its primary influences, which included philosophers like Hobbes, Voltaire, Locke. They were wealthy men, to be sure, but learning about their work set me on the path to learning about sociology, about history, about how much all media is one long chain of slightly modified ideas, with each new link adding a new twist or perspective. The game’s themes also spoke to some of the most personal concerns of my life, including economic class, injustice, about the disempowered fighting against a wealthy ruling class.

It was also a game where actions had serious consequences, and taking the quick, easy path could cause enormous harm to innocent bystanders. It was a message I took to heart. Playing through Deus Ex helped me realize that there are always consequences you can’t quite see, and that my thefts over the years had surely left a wake of victims who had suffered—particularly the ones where I had taken physical goods and money. If they worked for minimum wage, even my quick, pilfered fiver could have been an hour or more of their life.

But what I learned from the game also helped solidify my belief that online piracy, at least in the context of my own circumstances, was still justified. Yes, downloading an illicit digital work can cause a sort of a harm to the creators or corporations that aren’t receiving revenue, particularly independent developers, but when I weighed it against the desperation of my poverty and the worthlessness it made me internalize, there was no comparison.

Even in independent games, piracy isn’t always as cut and dry as it seems. While it can have big impacts on some games, other small developers have discovered counterintuitive benefits to piracy, embraced it, or at least become more empathetic to it.

Some, perhaps most, people in industrialized countries have the luxury of seeking out media they care about and stories that speak to them, and they can afford to support that work with their money. But for others like me, it can feel like a seemingly insurmountable struggle. To live even in relative poverty deprives of you new ideas; it deprives you of the tools and education you need to escape. In the most severe cases, it locks you out of society—out of voting, out of socializing, and out of connecting with others.

Poverty is often cyclical because it traps its victims in intellectual dead zones. We know that without stimulation and without challenge, the mind, like the belly, starves.

I don’t pirate games anymore, and I don’t support pirating games if you can afford to buy them. But when I needed it, piracy gave me hope. When I considered dropping out of high school, giving up on my future, and damning myself to repeat the cycle of poverty, I was able to look back on the sea of literature and countless games I’d downloaded for answers and inspiration. They not only helped me realize that I wasn’t as alone as I thought, but allowed me to develop the fluency necessary to start making informed, critical works of my own.

I wasn’t just taking the easy way out by pirating, because the way I had to travel wasn’t easy any way you look at it. I was trying to equalize a playing field that I knew was stacked against me. Piracy helped do that, by giving me access to art and books and games that allowed me to better myself, and inspired me to become who I am today.

Piracy gave me a future.