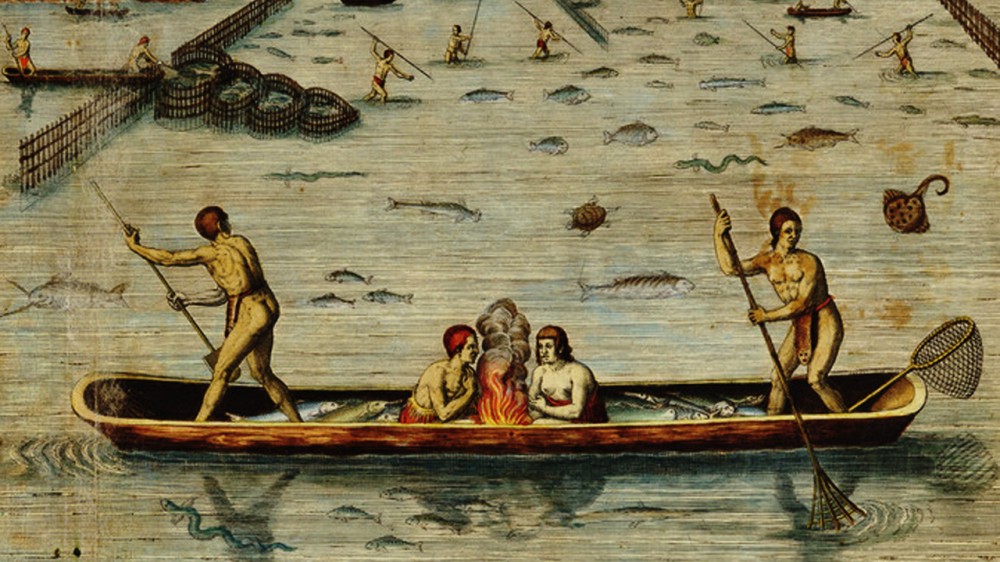 “Incolarum Virginiae piscandi ratio (The Method of Fishing of the Inhabitants of Virginia),” c. 1590, via the Encyclopedia Virginia.

In April 1607 Englishmen aboard three ships—the Susan Constant, Godspeed, and Discovery—sailed forty miles up the James River (named for the English king) in present-day Virginia (Named for Elizabeth I, the “Virgin Queen”) and settled upon just such a place. The uninhabited peninsula they selected was upriver and out of sight of Spanish patrols. It offered easy defense against ground assaults and was uninhabited but still located close enough to many Indian villages and their potentially lucrative trade networks. But the location was a disaster. Indians ignored the peninsula because of its terrible soil and its brackish tidal water that led to debilitating disease. Despite these setbacks, the English built Jamestown, the first permanent English colony in the present-day United States.

The English had not entered a wilderness but had arrived amid a people they called the Powhatan Confederacy. Powhatan, or Wahunsenacawh, as he called himself, led nearly 10,000 Algonquian-speaking Indians in the Chesapeake. They burned vast acreage to clear brush and create sprawling artificial park-like grasslands so that they could easily hunt deer, elk, and bison. The Powhatan raised corn, beans, squash, and possibly sunflowers, rotating acreage throughout the Chesapeake. Without plows, manure, or draft animals, the Powhatan achieved a remarkable number of calories cheaply and efficiently.

Jamestown was a profit-seeking venture backed by investors. The colonists were mostly gentlemen and proved entirely unprepared for the challenges ahead. They hoped for easy riches but found none. The peninsula’s location was poisonous and supplies from England were sporadic or spoiled. As John Smith later complained, they “Would rather starve than work.” And so they did. Disease and starvation ravaged the colonists. Fewer than half of the original colonists survived the first nine months.

John Smith, a yeoman’s son and capable leader, took command of the crippled colony and promised, “He that will not work shall not eat.” He navigated Indian diplomacy, claiming that he was captured and sentenced to death but Powhatan’s daughter, Pocahontas, intervened to save his life. She would later marry another colonist, John Rolfe, and die in England.

Powhatan kept the English alive that first winter. The Powhatan had welcomed the English and their manufactured goods. The Powhatan placed a high value on metal axe-heads, kettles, tools, and guns and eagerly traded furs and other abundant goods for them. With 10,000 confederated natives and with food in abundance, the Indians had little to fear and much to gain from the isolated outpost of sick and dying Englishmen.

Despite reinforcements, the English continued to die. Four hundred settlers arrived in 1609 and the overwhelmed colony entered a desperate “starving time” in the winter of 1609-1610. Supplies were lost at sea. Relations with the Indians deteriorated and the colonists fought a kind of slow-burning guerrilla war with the Powhatan. Disaster loomed for the colony. The settlers ate everything they could, roaming the woods for nuts and berries. They boiled leather. They dug up graves to eat the corpses of their former neighbors. One man was executed for killing and eating his wife. Some years later, George Percy recalled the colonists’ desperation during these years, when he served as the colony’s president: “Having fed upon our horses and other beasts as long as they lasted, we were glad to make shift with vermin as dogs, cats, rats and mice … as to eat boots shoes or any other leather … And now famine beginning to look ghastly and pale in every face, that nothing was spared to maintain life and to doe those things which seam incredible, as to dig up dead corpses out of graves and to eat them.” Archaeological excavations in 2012 exhumed the bones of a fourteen-year-old girl that exhibited the telltale signs of cannibalism. All but 60 settlers would die by the summer of 1610.

Little improved over the next several years. By 1616, 80 percent of all English immigrants that arrived in Jamestown had perished. England’s first American colony was a catastrophe. The colony was reorganized and in 1614 the marriage of Pocahantos to John Rolfe eased relations with the Powhatan, though the colony still limped along as a starving, commercially disastrous tragedy. The colonists were unable to find any profitable commodities and they still depended upon the Indians and sporadic shipments from England for food. But then tobacco saved Jamestown.

By the time King James I described tobacco as a “noxious weed, … loathsome to the eye, hateful to the nose, harmful to the brain, and dangerous to the lungs,” it had already taken Europe by storm. In 1616 John Rolfe crossed tobacco strains from Trinidad and Guiana and planted Virginia’s first tobacco crop. In 1617 the colony sent its first cargo of tobacco back to England. The “noxious weed,” a native of the New World, fetched a high price in Europe and the tobacco boom began in Virginia and then later spread to Maryland. “Tobacco created a gold rush society in Virginia,” wrote one historian. Within fifteen years American colonists were exporting over 500,000 pounds of tobacco per year. Within forty, they were exporting fifteen million.

Tobacco changed everything. It saved Virginia from ruin, incentivized further colonization, and laid the groundwork for what would become the United States. With a new market open, Virginia drew not only merchants and traders, but also settlers. Colonists came in droves. They were mostly young, mostly male, and mostly indentured servants. But even the rough terms of servitude were no match for the promise of land and potential profits that beckoned ambitious and dispossessed English farmers alike. But still there were not enough of them. Tobacco was a labor-intensive crop and ambitious planters, with seemingly limitless land before them, lacked only laborers to exponentially escalate their wealth and status. The colony’s great labor vacuum inspired the creation of the “headright policy” in 1618: any person who migrated to Virginia would automatically receive 50 acres of land and any immigrant whose passage they paid would entitle them to 50 acres more.

In 1619 the Virginia Company established the House of Burgesses, a limited representative body composed of white landowners that first met in Jamestown. That same year, a Dutch slave ship sold 20 Africans to the Virginia colonists. Southern slavery was born.

Soon the tobacco-growing colonists expanded beyond the bounds of Jamestown’s deadly peninsula. When it became clear that the English were not merely intent on maintaining a small trading post, but sought a permanent ever-expanding colony, conflict with the Powhatan Confederacy became almost inevitable. Powhatan died in 1622 and was succeeded by his brother, Opechancanough, who promised to drive the land-hungry colonists back into the sea. He launched a surprise attack and in a single day (March 22, 1622) killed 347 colonists, or one-fourth of all the colonists in Virginia. The colonists retaliated and revisited the massacres upon Indian settlements many times over. The massacre freed the colonists to drive the Indians off their land. The governor of Virginia declared it colonial policy to achieve the “expulsion of the savages to gain the free range of the country.” War and disease destroyed the remnants of the Chesapeake Indians and tilted the balance of power decisively toward the English colonizers, whose foothold in the New World would cease to be as tenuous and challenged.

English colonists brought to the New World particular visions of racial, cultural, and religious supremacy. Despite starving in the shadow of the Powhatan Confederacy, English colonists nevertheless judged themselves physically, spiritually, and technologically superior to native peoples in North America. Christianity, metallurgy, intensive agriculture, trans-Atlantic navigation, and even wheat all magnified the English sense of superiority. This sense of superiority, when coupled with outbreaks of violence, left the English feeling entitled to indigenous lands and resources.

Spanish conquerors established the framework for the Atlantic slave trade over a century before the first chained Africans arrived at Jamestown. Even Bartolomé de las Casas, celebrated for his pleas to save Native Americans from colonial butchery, for a time recommended that indigenous labor be replaced by importing Africans. Early English settlers from the Caribbean and Atlantic coast of North America mostly imitated European ideas of African inferiority. “Race” followed the expansion of slavery across the Atlantic world. Skin-color and race suddenly seemed fixed. Englishmen equated Africans with categorical blackness and blackness with Sin, “the handmaid and symbol of baseness.” An English essayist in 1695 wrote that “A negro will always be a negro, carry him to Greenland, feed him chalk, feed and manage him never so many ways.” More and more Europeans embraced the notions that Europeans and Africans were of distinct races. Others now preached that the Old Testament God cursed Ham, the son of Noah, and doomed blacks to perpetual enslavement.

And yet in the early years of American slavery, ideas about race were not yet fixed and the practice of slavery was not yet codified. The first generations of Africans in English North America faced miserable conditions but, in contrast to later American history, their initial servitude was not necessarily permanent, heritable, or even particularly disgraceful. Africans were definitively set apart as fundamentally different from their white counterparts, and faced longer terms of service and harsher punishments, but, like the indentured white servants whisked away from English slums, these first Africans in North America could also work for only a set number of years before becoming free landowners themselves. The Angolan Anthony Johnson, for instance, was sold into servitude but fulfilled his indenture and became a prosperous tobacco planter himself.

In 1622, at the dawn of the tobacco boom, Jamestown had still seemed a failure. But the rise of tobacco and the destruction of the Powhatan turned the tide. Colonists escaped the deadly peninsula and immigrants poured into the colony to grow tobacco. By 1650 over 15,000 colonists called Virginia home, and the colony began to turn a profit for the Crown.