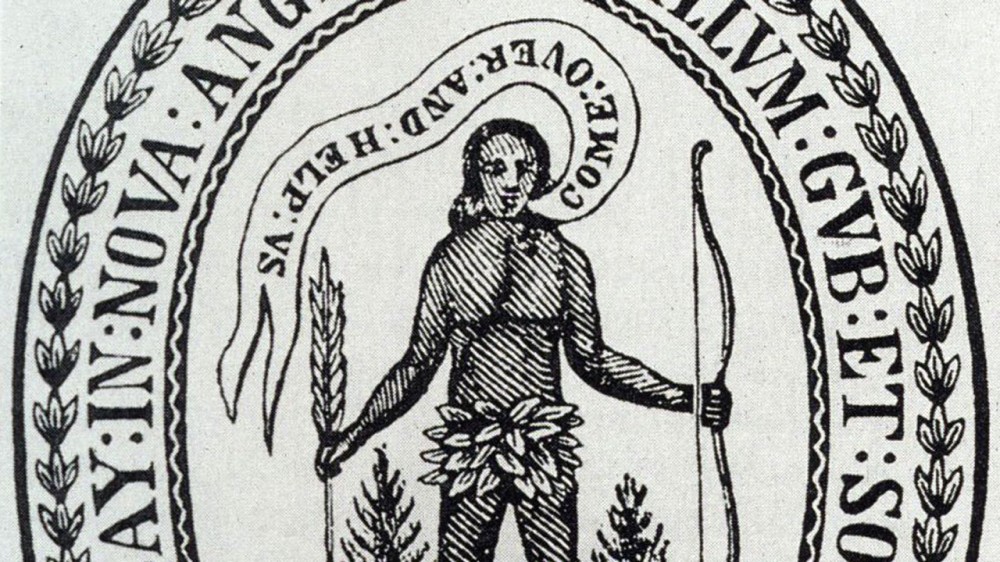 Seal of the Massachusetts Bay Colony, via The History Project (UC Davis).

The English colonies in New England established from 1620 onward were founded with loftier goals than those in Virginia. Although migrants to New England expected economic profit, religious motives directed the rhetoric and much of the reality of these colonies. Not every English person who moved to New England during the seventeenth century was a Puritan, but Puritans dominated the politics, religion, and culture of New England. Even after 1700, the region’s Puritan inheritance shaped many aspects of its history.

The term Puritan began as an insult, and its recipients usually referred to each other as “the godly” if they used a specific term at all. Puritans believed that the Church of England did not distance itself far enough from Catholicism after Henry VIII broke with Rome in the 1530s. They largely agreed with European Calvinists—followers of theologian Jean Calvin—on matters of religious doctrine. Calvinists (and Puritans) believed that mankind was redeemed by God’s Grace alone, and that the fate of an individual’s immortal soul was predestined. The happy minority God had already chosen to save were known among English Puritans as the Elect. Calvinists also argued that the decoration or churches, reliance on ornate ceremony, and (they argued) corrupt priesthood obscured God’s message. They believed that reading the Bible promised the best way to understand God.

Puritans were stereotyped by their enemies as dour killjoys, and the exaggeration has endured. It is certainly true that the Puritans’ disdain for excess and opposition to many holidays popular in Europe (including Christmas, which, as Puritans never tired of reminding everyone, the Bible never told anyone to celebrate) lent themselves to caricature. But Puritans understood themselves as advocating a reasonable middle path in a corrupt world. It would never occur to a Puritan, for example, to abstain from alcohol or sex.

During the first century after the English Reformation (c.1530-1630) Puritans sought to “purify” the Church of England of all practices that smacked of Catholicism, advocating a simpler worship service, the abolition of ornate churches, and other reforms. They had some success in pushing the Church of England in a more Calvinist direction, but with the coronation of King Charles I (r. 1625-1649), the Puritans gained an implacable foe that cast English Puritans as excessive and dangerous. Facing growing persecution, the Puritans began the Great Migration, during which about 20,000 people traveled to New England between 1630 and 1640. The Puritans (unlike the small band of separatist “Pilgrims” who founded Plymouth Colony in 1620) remained committed to reforming the Church of England, but temporarily decamped to North America to accomplish this task. Leaders like John Winthrop insisted they were not separating from, or abandoning, England, but were rather forming a godly community in America, that would be a “Shining City on a Hill” and an example for reformers back home. The Puritans did not seek to create a haven of religious toleration, a notion that they—along with nearly all European Christians—regarded as ridiculous at best, and dangerous at worst.

While the Puritans did not succeed in building a godly utopia in New England, a combination of Puritan traits with several external factors created colonies wildly different from any other region settled by English people. Unlike those heading to Virginia, colonists in New England (Plymouth [1620], Massachusetts Bay [1630], Connecticut [1636], and Rhode Island [1636]) generally arrived in family groups. The majority of New England immigrants were small landholders in England, a class contemporary English called the “middling sort.” When they arrived in New England they tended to replicate their home environments, founding towns comprised of independent landholders. The New England climate and soil made large-scale plantation agriculture impractical, so the system of large landholders using masses of slaves or indentured servants to grow labor-intensive crops never took hold.

There is no evidence that the New England Puritans would have opposed such a system were it possible; other Puritans made their fortunes on the Caribbean sugar islands, and New England merchants profited as suppliers of provisions and slaves to those colonies. By accident of geography as much as by design, then, New England society was much less stratified than any of Britain’s other seventeenth-century colonies.

Although New England colonies could boast wealthy landholding elites, the disparity of wealth in the region remained narrow compared to the Chesapeake, Carolina, or the Caribbean. Instead, seventeenth-century New England was characterized by a broadly-shared modest prosperity based on a mixed economy dependent on small farms, shops, fishing, lumber, shipbuilding, and trade with the Atlantic World.

A combination of environmental factors and the Puritan social ethos produced a region of remarkable health and stability during the seventeenth century. New England immigrants avoided most of the deadly outbreaks of tropical disease that turned Chesapeake colonies into graveyards. Disease, in fact, only aided English settlement and relations to Native Americans. In contrast to other English colonists who had to contend with powerful Native American neighbors, the Puritans confronted the stunned survivors of a biological catastrophe. A lethal pandemic of smallpox during the 1610s swept away as much as 90 percent of the region’s Native American population. Many survivors welcomed the English as potential allies against rival tribes who had escaped the catastrophe. The relatively healthy environment coupled with political stability and the predominance of family groups among early immigrants allowed the New England population to grow to 91,000 people by 1700 from only 21,000 immigrants. In contrast, 120,000 English went to the Chesapeake, and only 85,000 white colonists remained in 1700.

The New England Puritans set out to build their utopia by creating communities of the godly. Groups of men, often from the same region of England, applied to the colony’s General Court for land grants, which averaged 36 square miles. They generally divided part of the land for immediate use while keeping much of the rest as “commons” or undivided land for future generations. The town’s inhabitants collectively decided the size of each settler’s home lot based on their current wealth and status. Besides oversight of property, the town restricted membership, and new arrivals needed to apply for admission. Those who gained admittance could participate in town governments that, while not democratic by modern standards, nevertheless had broad popular involvement. All male property holders could vote in town meetings and choose the selectmen, assessors, constables, and other officials from among themselves to conduct the daily affairs of government. Upon their founding, towns wrote covenants, reflecting the Puritan belief in God’s covenant with His people. Towns sought to arbitrate disputes and contain strife, as did the church. Wayward or divergent individuals were persuaded and corrected before coercion.

Popular conceptions of Puritans as hardened authoritarians are exaggerated, but if persuasion and arbitration failed, people who did not conform to community norms were punished or removed. Massachusetts banished Anne Hutchinson, Roger Williams, and other religious dissenters like the Quakers.

Although by many measures colonization in New England succeeded, its Puritan leaders failed in their own mission to create a utopian community that would inspire their fellows back in England. They tended to focus their disappointment on the younger generation. “But alas!” Increase Mather lamented, “That so many of the younger Generation have so early corrupted their [the founders’] doings!” The Jeremiad, a sermon lamenting the fallen state of New England due to its straying from its early virtuous path, became a staple of late seventeenth-century Puritan literature.

Yet the Jeremiads could not stop the effects of the prosperity that the early Puritans achieved. The population spread and grew more diverse as New England prospered. Many, if not most, New Englanders retained strong ties to their Calvinist roots into the eighteenth century, but the Puritans (who became Congregationalists) struggled against a rising tide of religious pluralism. On December 25, 1727, Judge Samuel Sewell noted in his diary that a new Anglican minister “keeps the day in his new Church at Braintrey: people flock thither.” Previously forbidden holidays like Christmas were celebrated only in Church. Puritan divine Cotton Mather discovered on the Christmas of 1711, “a number of young people of both sexes, belonging, many of them, to my flock, had…a Frolick, a reveling Feast, and a Ball, which discovers their Corruption.”

Despite the lamentations of the Mathers and other Puritan leaders of their failure, they left an enduring mark on New England culture and society that endured long after the region’s residents ceased to be called “Puritan.”