The Consequences of the American Revolution

Like the earlier distinction between “origins” and “causes,” the Revolution also had short- and long-term consequences. Perhaps the most important immediate consequence of declaring independence was the creation of state constitutions in 1776 and 1777. The Revolution also unleashed powerful political, social, and economic forces that would transform the post-Revolution politics and society, including increased participation in politics and governance, the legal institutionalization of religious toleration, and the growth and diffusion of the population. The Revolution also had significant short-term effects on the lives of women in the new United States of America. In the long-term, the Revolution would also have significant effects on the lives of slaves and free blacks as well as the institution of slavery itself. It also affected Native Americans by opening up western settlement and creating governments hostile to their territorial claims. Even more broadly, the Revolution ended the mercantilist economy, opening new opportunities in trade and manufacturing.

The new states drafted written constitutions, which, at the time, was an important innovation from the traditionally unwritten British Constitution. Most created weak governors and strong legislatures with regular elections and moderately increased the size of the electorate. A number of states followed the example of Virginia, which included a declaration or “bill” of rights in their constitution designed to protect the rights of individuals and circumscribe the prerogative of the government. Pennsylvania’s first state constitution was the most radical and democratic. They created a unicameral legislature and an Executive Council but no genuine executive. All free men could vote, including those who did not own property. Massachusetts’ constitution, passed in 1780, was less democratic but underwent a more popular process of ratification. In the fall of 1779, each town sent delegates––312 in all––to a constitutional convention in Cambridge. Town meetings debated the constitution draft and offered suggestions. Anticipating the later federal constitution, Massachusetts established a three-branch government based on checks and balances between the branches. Unlike some other states, it also offered the executive veto power over legislation. 1776 was the year of independence, but it was also the beginning of an unprecedented period of constitution-making and state building.

The Revolution’s most important long-term economic consequence was the end of mercantilism. The British Empire had imposed various restrictions on the colonial economies including limiting trade, settlement, and manufacturing. The Revolution opened new markets and new trade relationships. The Americans’ victory also opened the western territories for invasion and settlement, which created new domestic markets. Americans began to create their own manufacturers, no longer content to reply on those in Britain.

Despite these important changes, the American Revolution had its limits. Following their unprecedented expansion into political affairs during the imperial resistance, women also served the patriot cause during the war. However, the Revolution did not result in civic equality for women. Instead, during the immediate post-war period, women became incorporated into the polity to some degree as “republican mothers.” These new republican societies required virtuous citizens and it became mothers’ responsibility to raise and educate future citizens. This opened opportunity for women regarding education, but they still remained largely on the peripheries of the new American polity. 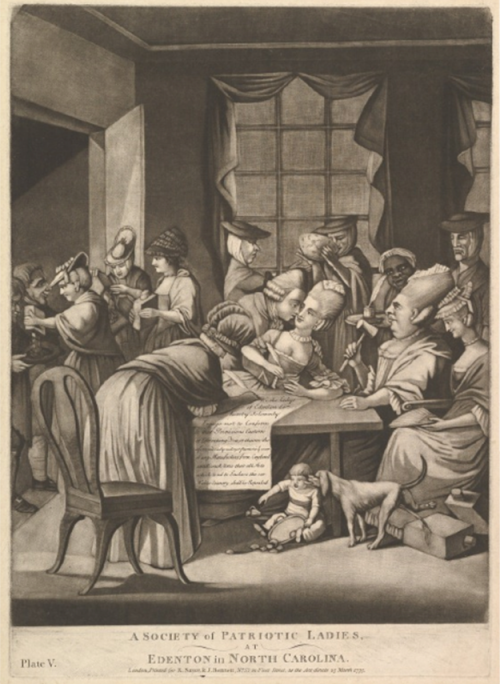 While in the 13 colonies boycotting women were seen as patriots, they were mocked in British prints like this one as immoral harlots sticking their noses in the business of men. Philip Dawe, “A Society of Patriotic Ladies at Edenton in North Carolina, March 1775. Metropolitan Museum of Art.

Slaves and free blacks also impacted (and were impacted by) the Revolution. The British were the first to recruit black (or “Ethiopian”) regiments, as early as Dunmore’s Proclamation of 1775 in Virginia, which promised freedom to any slaves who would escape their masters and join the British cause. At first, Washington, a slaveholder himself, resisted allowing free blacks and former slaves to join the Continental Army, but he eventually relented. In 1775, Peter Salem’s master freed him to fight with the militia. Salem faced British Regulars in the battles at Lexington and Bunker Hill, where he fought valiantly with around three-dozen other black Americans. Salem not only contributed to the cause, but he earned the ability to determine his own life after his enlistment ended. Salem was not alone, but many more slaves seized upon the tumult of war to run away and secure their own freedom directly.

Between 30,000 and 100,000 slaves deserted their masters during the war. In 1783, thousands of Loyalist former slaves fled with the British army. They hoped that the British government would uphold the promise of freedom and help them establish new homes elsewhere in the Empire. The Treaty of Paris, which ended the war, demanded that British troops leave runaway slaves behind, but the British military commanders upheld earlier promises and evacuated thousands of freedmen, transporting them to Canada, the Caribbean, or Great Britain. But black loyalists continued to face social and economic marginalization, including restrictions on land ownership. In 1792, Black loyalist and Baptist preacher David George resisted discrimination, joining a colonization project that led nearly 1,200 former black Americans from Nova Scotia to Sierra Leone, in Africa.

The fight for liberty led some Americans to manumit their slaves, and most of the new northern states soon passed gradual emancipation laws. Manumission also occurred in the Upper South, but in the Lower South, some masters revoked their offers of freedom for service, and other freedmen were forced back into bondage. The Revolution’s rhetoric of equality created a “revolutionary generation” of slaves and free blacks that would eventually encourage the antislavery movement. Slave revolts began to incorporate claims for freedom based on revolutionary ideals. In the long-term, the Revolution failed to reconcile slavery with these new egalitarian republican societies, a tension that eventually boiled over in the 1830s and 1840s and effectively tore the nation in two in the 1850s and 1860s.

Native Americans, too, participated in and were affected by the Revolution. Many Native American tribes and confederacies, such as the Shawnee, Creek, Cherokee, and Iroquois, sided with the British. They had hoped for a British victory that would continue to restrain the land-hungry colonial settlers from moving west beyond the Appalachian Mountains. Unfortunately, the Americans’ victory and Native Americans’ support for the British created a pretense for justifying the rapid, and often brutal expansion into the western territories. Native American tribes would continue to be displaced and pushed further west throughout the nineteenth century. Ultimately, American independence marked the beginning of the end of what had remained of Native American independence.