The War for Independence

The war began at Lexington and Concord, more than a year before Congress declared independence. In 1775, the British believed that the mere threat of war and a few minor incursions to seize supplies would be enough to cow the colonial rebellion. Those minor incursions, however, turned into a full-out military conflict. Despite an early American victory in Boston, the new nation faced the daunting task of taking on the world’s largest military.

In the summer of 1776, the forces that had been at Boston arrived at New York. The largest expeditionary force in British history, including tens of thousands of German mercenaries known as “Hessians” followed soon after. New York was the perfect location to launch expeditions aimed at seizing control of the Hudson River and isolate New England from the rest of the continent. Also, New York contained many loyalists, particularly among the merchant and Anglican communities. In October, the British finally launched an attack on Brooklyn and Manhattan. The Continental Army took severe losses before retreating through New Jersey. With the onset of winter, Washington needed something to lift morale and encourage reenlistment. Therefore, he launched a successful surprise attack on the Hessian camp at Trenton on Christmas Day, by ferrying the few thousand men he had left across the Delaware River under the cover of night. The victory won the Continental Army much needed supplies and a morale boost following the disaster at New York.

An even greater success followed in upstate New York. In 1777, in an effort to secure the Hudson River, British General John Burgoyne led an army from Canada through upstate New York. There, he was to meet up with a detachment of General Howe’s forces marching north from Manhattan. However, Howe abandoned the plan without telling Burgoyne and instead sailed to Philadelphia to capture the new nation’s capital. The Continental Army defeated Burgoyne’s men at Saratoga, New York. This victory proved a major turning point in the war. Benjamin Franklin had been in Paris trying to secure a treaty of alliance with the French. However, the French were reluctant to back what seemed like an unlikely cause. News of the victory at Saratoga convinced the French that the cause might not have been as unlikely as they had thought. A “Treaty of Amity and Commerce” was signed on February 6, 1778. The treaty effectively turned a colonial rebellion into a global war as fighting between the British and French soon broke out in Europe and India.

Howe had taken Philadelphia in 1777 but returned to New York once winter ended. He slowly realized that European military tactics would not work in North America. In Europe, armies fought head-on battles in attempt to seize major cities. However, in 1777, the British had held Philadelphia and New York and yet still weakened their position. Meanwhile, Washington realized after New York that the largely untrained Continental Army could not match up in head-on battles with the professional British army. So he developed his own logic of warfare, which involved smaller, more frequent skirmishes and avoided any major engagements that would risk his entire army. As long as he kept the army intact, the war would continue, no matter how many cities the British captured.

In 1778, the British shifted their attentions to the South, where they believed they enjoyed more popular support. Campaigns from Virginia to Georgia captured major cities but the British simply did not have the manpower to retain military control. And, upon their departures, severe fighting ensued between local patriots and loyalists, often pitting family members against one another. The War in the South was truly a civil war.

By 1781, the British were also fighting France, Spain, and Holland. The British public’s support for the costly war in North America was quickly waning. The Americans took advantage of the British southern strategy with significant aid from the French army and navy. In October, Washington marched his troops from New York to Virginia in an effort to trap the British southern army under the command of Gen. Charles Cornwallis. Cornwallis had dug his men in at Yorktown awaiting supplies and reinforcements from New York. However, the Continental and French armies arrived first, quickly followed by a French navy contingent, encircling Cornwallis’s forces and, after laying siege to the city, forcing his surrender. The capture of another army left the British without a new strategy and without public support to continue the war. Peace negotiations took place in France and the war came to an official end on September 3, 1783. 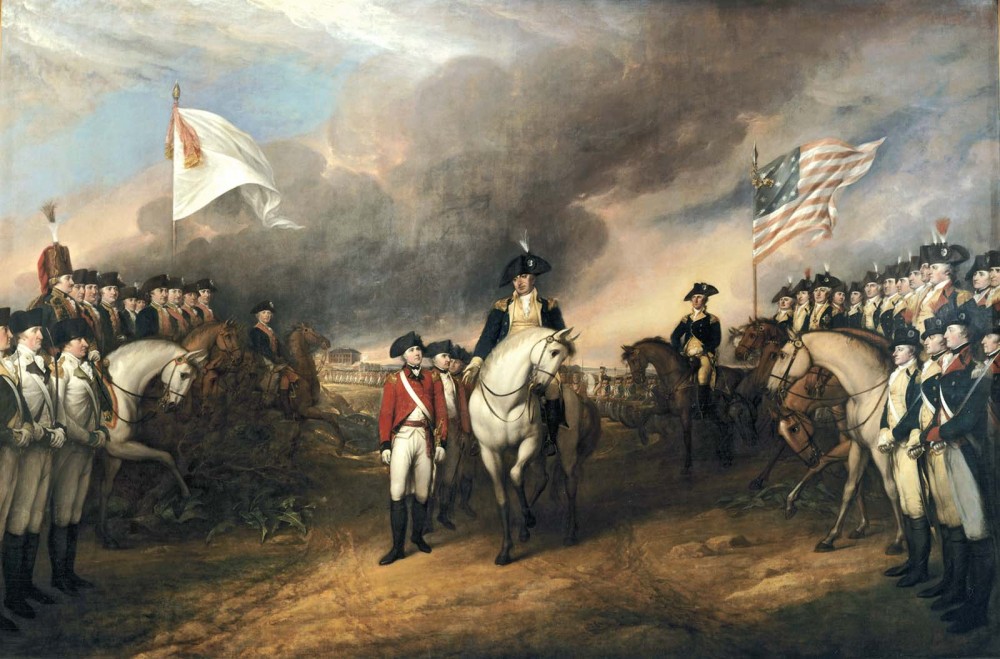 Lord Cornwallis’s surrender signalled the victory of the American revolutionaries over what they considered to be the despotic rule of Britain. This moment would live on in American memory as a pivotal one in the nation’s origin story, prompting the United States government to commission artist John Trumbull to create this painting of the event in 1817. John Trumbull, Surrender of Lord Cornwallis, 1820. Wikimedia.

Americans celebrated their victory, but it came at great cost. Soldiers suffered through brutal winters with inadequate resources. During the single winter at Valley Forge, over 2,500 Americans died from disease and exposure. Life was not easy on the home front either. Women on both sides of the conflict were frequently left alone to care for their households. In addition to their existing duties, women took on roles usually assigned to men on farms and in shops and taverns. Abigail Adams addressed the difficulties she encountered while “minding family affairs” on their farm in Braintree, Massachusetts. Abigail managed the planting and harvesting of crops, in the midst of severe labor shortages and inflation, while dealing with several tenants on the Adams’ property, raising her children, and making clothing and other household goods. In order to support the family economically during John’s frequent absences and the uncertainties of war, Abigail also invested in several speculative schemes and sold imported goods.

While Abigail remained safely out of the fray, other women were not so fortunate. The Revolution was, in essence, a civil war; fought on women’s very doorsteps, in the fields next to their homes. There was no way for women to avoid the conflict, or the disruptions and devastations it caused. As the leader of the state militia during the Revolution, Mary Silliman’s husband, Gold, was absent from their home for much of the conflict. On the morning of July 7, 1779, when a British fleet attacked nearby Fairfield, Connecticut, it was Mary who calmly evacuated her household, including her children and servants, to North Stratford. When Gold was captured by loyalists and held prisoner, Mary, six months pregnant with their second child, wrote letters to try and secure his release. When such appeals were ineffectual, Mary spearheaded an effort to capture a prominent Tory leader to exchange for her husband’s freedom.

Men and women together struggled through years of war and hardship. But even victory brought uncertainty. The Revolution created as many opportunities as it did corpses, and it was left to the survivors to determine the future of the new nation. 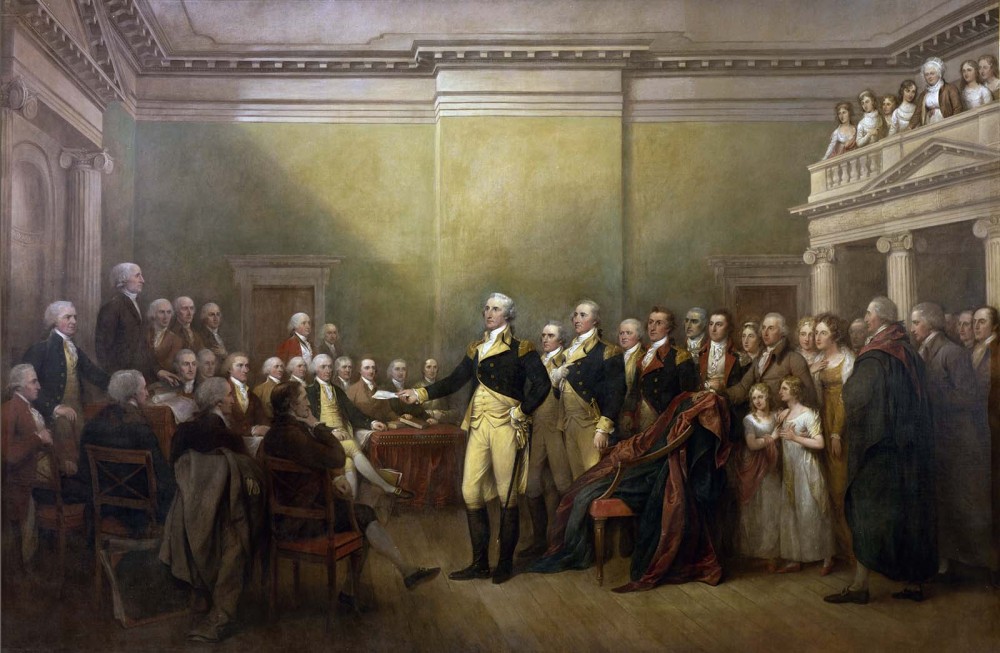 Another John Trumbull piece commissioned for the Capitol in 1817, this painting depicts what would be remembered as the moment the new United States became a republic. On December 23, 1783, George Washington, widely considered the hero of the Revolution, resigned his position as the most powerful man in the former thirteen colonies. Giving up his role as Commander-in-Chief of the Army insured that civilian rule would define the new nation, and that a republic would be set in place rather than a dictatorship. John Trumbull, General George Washington Resigning His Commission, c. 1817-1824. Wikimedia.