Mammalian lungs are located in the thoracic cavity where they are surrounded and protected by the rib cage, intercostal muscles, and bound by the chest wall. The bottom of the lungs is contained by the diaphragm, a skeletal muscle that facilitates breathing. Breathing requires the coordination of the lungs, the chest wall, and most importantly, the diaphragm.

Amphibians have evolved multiple ways of breathing. Young amphibians, like tadpoles, use gills to breathe, and they don’t leave the water. Some amphibians retain gills for life. As the tadpole grows, the gills disappear and lungs grow. These lungs are primitive and not as evolved as mammalian lungs. Adult amphibians are lacking or have a reduced diaphragm, so breathing via lungs is forced. The other means of breathing for amphibians is diffusion across the skin. To aid this diffusion, amphibian skin must remain moist.

Birds face a unique challenge with respect to breathing: They fly. Flying consumes a great amount of energy; therefore, birds require a lot of oxygen to aid their metabolic processes. Birds have evolved a respiratory system that supplies them with the oxygen needed to enable flying. Similar to mammals, birds have lungs, which are organs specialized for gas exchange. Oxygenated air, taken in during inhalation, diffuses across the surface of the lungs into the bloodstream, and carbon dioxide diffuses from the blood into the lungs and expelled during exhalation. The details of breathing between birds and mammals differ substantially.

In addition to lungs, birds have air sacs inside their body. Air flows in one direction from the posterior air sacs to the lungs and out of the anterior air sacs. The flow of air is in the opposite direction from blood flow, and gas exchange takes place much more efficiently. This type of breathing enables birds to obtain the requisite oxygen, even at higher altitudes where the oxygen concentration is low. This directionality of airflow requires two cycles of air intake and exhalation to completely get the air out of the lungs.

Decades of research by paleontologists have shown that birds evolved from therapods, meat-eating dinosaurs (Figure 1). In fact, fossil evidence shows that meat-eating dinosaurs that lived more than 100 million years ago had a similar flow-through respiratory system with lungs and air sacs. Archaeopteryxand Xiaotingia, for example, were flying dinosaurs and are believed to be early precursors of birds.

Most of us consider that dinosaurs are extinct. However, modern birds are descendants of avian dinosaurs. The respiratory system of modern birds has been evolving for hundreds of millions of years. 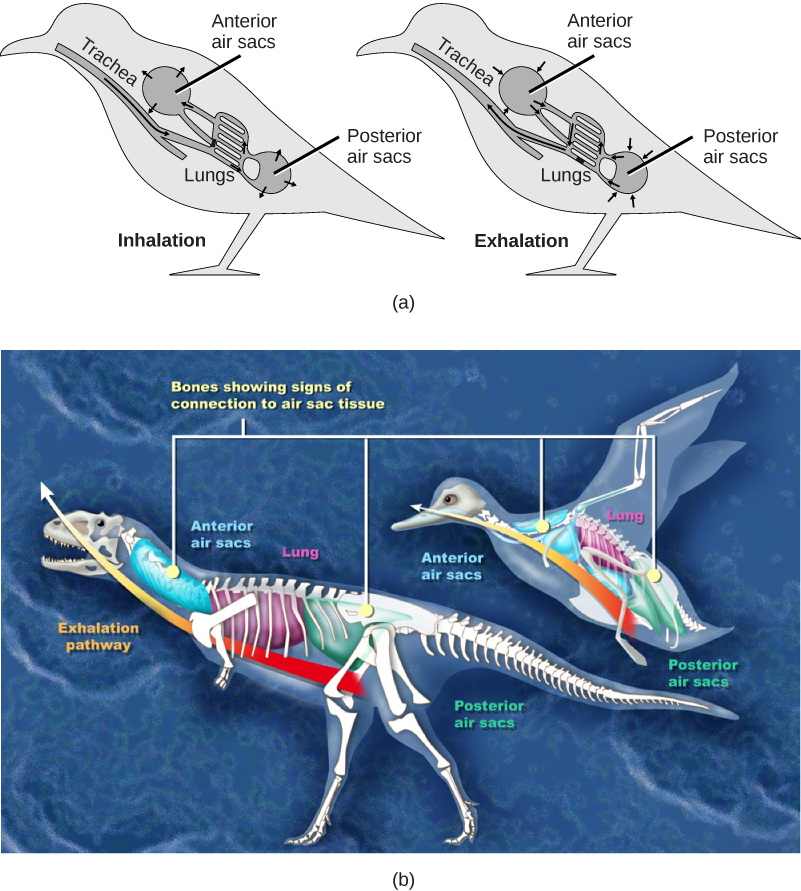 Figure 1. (a) Birds have a flow-through respiratory system in which air flows unidirectionally from the posterior sacs into the lungs, then into the anterior air sacs. The air sacs connect to openings in hollow bones. (b) Dinosaurs, from which birds descended, have similar hollow bones and are believed to have had a similar respiratory system. (credit b: modification of work by Zina Deretsky, National Science Foundation)

All mammals have lungs that are the main organs for breathing. Lung capacity has evolved to support the animal’s activities. During inhalation, the lungs expand with air, and oxygen diffuses across the lung’s surface and enters the bloodstream. During exhalation, the lungs expel air and lung volume decreases. In the next few sections, the process of human breathing will be explained. 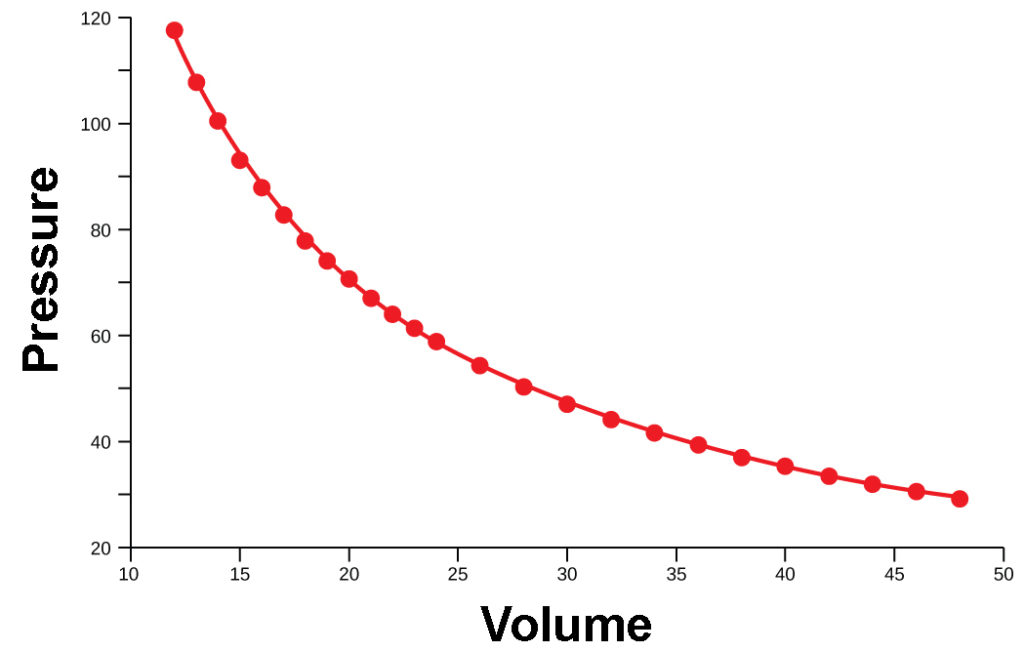 Figure 2. This graph shows data from Boyle’s original 1662 experiment, which shows that pressure and volume are inversely related. No units are given as Boyle used arbitrary units in his experiments.

There is always a slightly negative pressure within the thoracic cavity, which aids in keeping the airways of the lungs open. During inhalation, volume increases as a result of contraction of the diaphragm, and pressure decreases (according to Boyle’s Law). This decrease of pressure in the thoracic cavity relative to the environment makes the cavity less than the atmosphere (Figure 3a). Because of this drop in pressure, air rushes into the respiratory passages. To increase the volume of the lungs, the chest wall expands. This results from the contraction of the intercostal muscles, the muscles that are connected to the rib cage. Lung volume expands because the diaphragm contracts and the intercostals muscles contract, thus expanding the thoracic cavity. This increase in the volume of the thoracic cavity lowers pressure compared to the atmosphere, so air rushes into the lungs, thus increasing its volume. The resulting increase in volume is largely attributed to an increase in alveolar space, because the bronchioles and bronchi are stiff structures that do not change in size.

Figure 3. The lungs, chest wall, and diaphragm are all involved in respiration, both (a) inhalation and (b) expiration. (credit: modification of work by Mariana Ruiz Villareal) 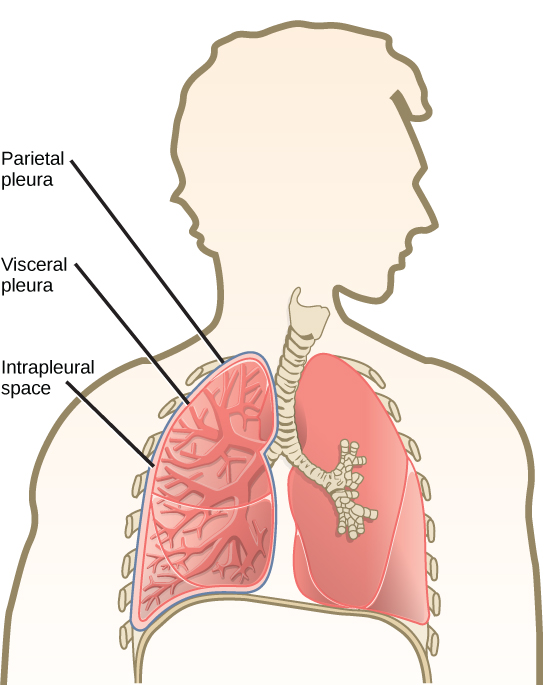 Figure 4. A tissue layer called pleura surrounds the lung and interior of the thoracic cavity. (credit: modification of work by NCI)

The chest wall expands out and away from the lungs. The lungs are elastic; therefore, when air fills the lungs, the elastic recoil within the tissues of the lung exerts pressure back toward the interior of the lungs. These outward and inward forces compete to inflate and deflate the lung with every breath. Upon exhalation, the lungs recoil to force the air out of the lungs, and the intercostal muscles relax, returning the chest wall back to its original position (Figure 3b).

Each lung is surrounded by an invaginated sac. The layer of tissue that covers the lung and dips into spaces is called the visceral pleura. A second layer of parietal pleura lines the interior of the thorax (Figure 4). The space between these layers, the intrapleural space, contains a small amount of fluid that protects the tissue and reduces the friction generated from rubbing the tissue layers together as the lungs contract and relax. Pleurisy results when these layers of tissue become inflamed; it is painful because the inflammation increases the pressure within the thoracic cavity and reduces the volume of the lung.

View how Boyle’s Law is related to breathing and watch this video:

Surfactant works like a detergent to reduce the surface tension and allows for easier inflation of the airways. When a balloon is first inflated, it takes a large amount of effort to stretch the plastic and start to inflate the balloon. If a little bit of detergent was applied to the interior of the balloon, then the amount of effort or work needed to begin to inflate the balloon would decrease, and it would become much easier to start blowing up the balloon. This same principle applies to the airways. A small amount of surfactant to the airway tissues reduces the effort or work needed to inflate those airways. Babies born prematurely sometimes do not produce enough surfactant. As a result, they suffer from respiratory distress syndrome, because it requires more effort to inflate their lungs. Surfactant is also important for preventing collapse of small alveoli relative to large alveoli.

Pulmonary diseases reduce the rate of gas exchange into and out of the lungs. Two main causes of decreased gas exchange are compliance (how elastic the lung is) and resistance (how much obstruction exists in the airways). A change in either can dramatically alter breathing and the ability to take in oxygen and release carbon dioxide. 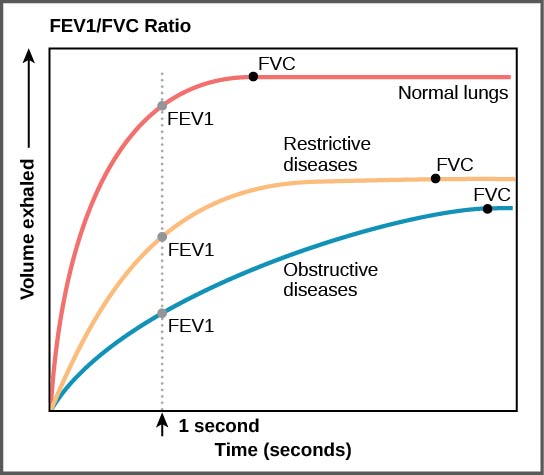 Examples of restrictive diseases are respiratory distress syndrome and pulmonary fibrosis. In both diseases, the airways are less compliant and they are stiff or fibrotic. There is a decrease in compliance because the lung tissue cannot bend and move. In these types of restrictive diseases, the intrapleural pressure is more positive and the airways collapse upon exhalation, which traps air in the lungs. Forced or functional vital capacity (FVC), which is the amount of air that can be forcibly exhaled after taking the deepest breath possible, is much lower than in normal patients, and the time it takes to exhale most of the air is greatly prolonged (Figure 5). A patient suffering from these diseases cannot exhale the normal amount of air.

Obstructive diseases and conditions include emphysema, asthma, and pulmonary edema. In emphysema, which mostly arises from smoking tobacco, the walls of the alveoli are destroyed, decreasing the surface area for gas exchange. The overall compliance of the lungs is increased, because as the alveolar walls are damaged, lung elastic recoil decreases due to a loss of elastic fibers, and more air is trapped in the lungs at the end of exhalation. Asthma is a disease in which inflammation is triggered by environmental factors. Inflammation obstructs the airways. The obstruction may be due to edema (fluid accumulation), smooth muscle spasms in the walls of the bronchioles, increased mucus secretion, damage to the epithelia of the airways, or a combination of these events. Those with asthma or edema experience increased occlusion from increased inflammation of the airways. This tends to block the airways, preventing the proper movement of gases (Figure 5). Those with obstructive diseases have large volumes of air trapped after exhalation and breathe at a very high lung volume to compensate for the lack of airway recruitment.

Pulmonary circulation pressure is very low compared to that of the systemic circulation. It is also independent of cardiac output. This is because of a phenomenon called recruitment, which is the process of opening airways that normally remain closed when cardiac output increases. As cardiac output increases, the number of capillaries and arteries that are perfused (filled with blood) increases. These capillaries and arteries are not always in use but are ready if needed. At times, however, there is a mismatch between the amount of air (ventilation, V) and the amount of blood (perfusion, Q) in the lungs. This is referred to as ventilation/perfusion (V/Q) mismatch.

There are two types of V/Q mismatch. Both produce dead space, regions of broken down or blocked lung tissue. Dead spaces can severely impact breathing, because they reduce the surface area available for gas diffusion. As a result, the amount of oxygen in the blood decreases, whereas the carbon dioxide level increases. Dead space is created when no ventilation and/or perfusion takes place. Anatomical dead space or anatomical shunt, arises from an anatomical failure, while physiological dead space or physiological shunt, arises from a functional impairment of the lung or arteries.

An example of an anatomical shunt is the effect of gravity on the lungs. The lung is particularly susceptible to changes in the magnitude and direction of gravitational forces. When someone is standing or sitting upright, the pleural pressure gradient leads to increased ventilation further down in the lung. As a result, the intrapleural pressure is more negative at the base of the lung than at the top, and more air fills the bottom of the lung than the top. Likewise, it takes less energy to pump blood to the bottom of the lung than to the top when in a prone position. Perfusion of the lung is not uniform while standing or sitting. This is a result of hydrostatic forces combined with the effect of airway pressure. An anatomical shunt develops because the ventilation of the airways does not match the perfusion of the arteries surrounding those airways. As a result, the rate of gas exchange is reduced. Note that this does not occur when lying down, because in this position, gravity does not preferentially pull the bottom of the lung down.

A physiological shunt can develop if there is infection or edema in the lung that obstructs an area. This will decrease ventilation but not affect perfusion; therefore, the V/Q ratio changes and gas exchange is affected.

Watch this video to view the mechanics of breathing.