Prions and viroids are pathogens (agents with the ability to cause disease) that have simpler structures than viruses but, in the case of prions, still can produce deadly diseases.

Prions, so-called because they are proteinaceous, are infectious particles—smaller than viruses—that contain no nucleic acids (neither DNA nor RNA). Historically, the idea of an infectious agent that did not use nucleic acids was considered impossible, but pioneering work by Nobel Prize-winning biologist Stanley Prusiner has convinced the majority of biologists that such agents do indeed exist.

Fatal neurodegenerative diseases, such as kuru in humans and bovine spongiform encephalopathy (BSE) in cattle (commonly known as “mad cow disease”), were shown to be transmitted by prions. The disease was spread by the consumption of meat, nervous tissue, or internal organs between members of the same species. Kuru, native to humans in Papua New Guinea, was spread from human to human via ritualistic cannibalism. BSE, originally detected in the United Kingdom, was spread between cattle by the practice of including cattle nervous tissue in feed for other cattle. Individuals with kuru and BSE show symptoms of loss of motor control and unusual behaviors, such as uncontrolled bursts of laughter with kuru, followed by death. Kuru was controlled by inducing the population to abandon its ritualistic cannibalism.

On the other hand, BSE was initially thought to only affect cattle. Cattle dying of the disease were shown to have developed lesions or “holes” in the brain, causing the brain tissue to resemble a sponge. Later on in the outbreak, however, it was shown that a similar encephalopathy in humans known as variant Creutzfeldt-Jakob disease (CJD) could be acquired from eating beef from animals with BSE, sparking bans by various countries on the importation of British beef and causing considerable economic damage to the British beef industry (Figure 1). BSE still exists in various areas, and although a rare disease, CJD is difficult to treat. The disease can be spread from human to human by blood, so many countries have banned blood donation from regions associated with BSE.

Figure 1. (PrPsc) when it encounters this variant form of the protein. PrPsc may arise spontaneously in brain tissue, especially if a mutant form of the protein is present, or it may occur via the spread of misfolded prions consumed in food into brain tissue. (b) This prion-infected brain tissue, visualized using light microscopy, shows the vacuoles that give it a spongy texture, typical of transmissible spongiform encephalopathies. (credit b: modification of work by Dr. Al Jenny, USDA APHIS; scale-bar data from Matt Russell)

The cause of spongiform encephalopathies, such as kuru and BSE, is an infectious structural variant of a normal cellular protein called PrP (prion protein). It is this variant that constitutes the prion particle. PrP exists in two forms, PrPc, the normal form of the protein, and PrPsc, the infectious form. Once introduced into the body, the PrPsc contained within the prion binds to PrPc and converts it to PrPsc. This leads to an exponential increase of the PrPsc protein, which aggregates. PrPsc is folded abnormally, and the resulting conformation (shape) is directly responsible for the lesions seen in the brains of infected cattle. Thus, although not fully accepted among scientists, the prion seems likely to be an entirely new form of infectious agent, the first one found whose transmission is not reliant upon genes made of DNA or RNA. 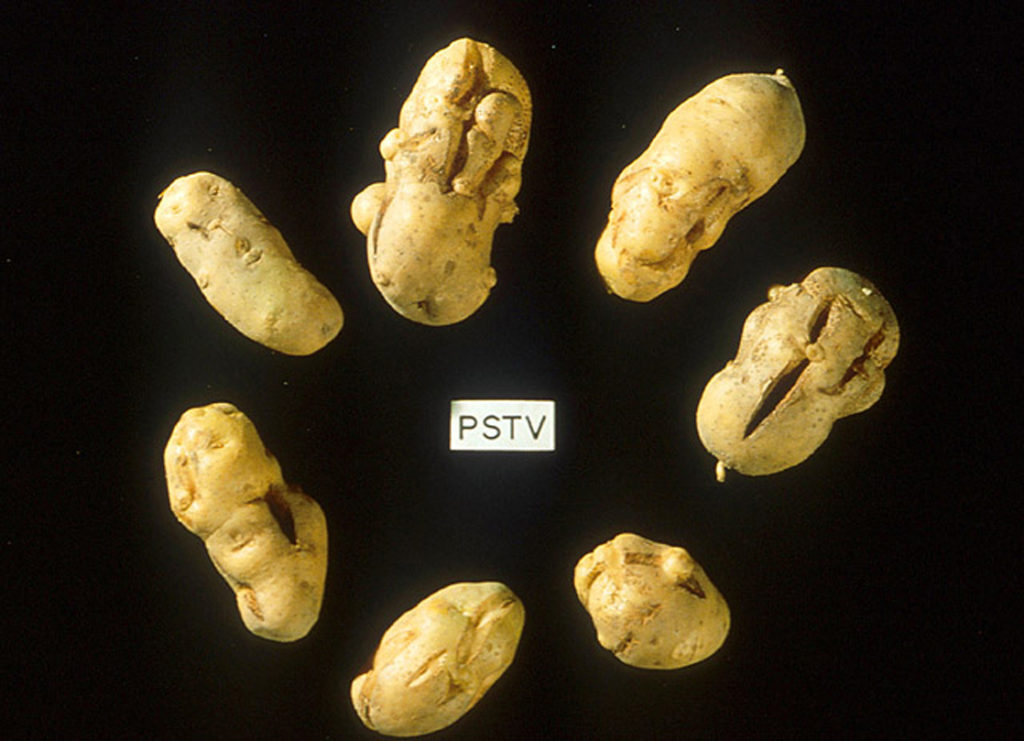 Figure 2. These potatoes have been infected by the potato spindle tuber viroid. (credit: Pamela Roberts, University of Florida Institute of Food and Agricultural Sciences, USDA ARS)

Viroids are plant pathogens: small, single-stranded, circular RNA particles that are much simpler than a virus. They do not have a capsid or outer envelope, but like viruses can reproduce only within a host cell. Viroids do not, however, manufacture any proteins, and they only produce a single, specific RNA molecule. Human diseases caused by viroids have yet to be identified.

Viroids are known to infect plants and are responsible for crop failures and the loss of millions of dollars in agricultural revenue each year. Some of the plants they infect include potatoes, cucumbers, tomatoes, chrysanthemums, avocados, and coconut palms. For example, the potato spindle tuber viroid (PSTVd), which typically spreads when infected knives cut healthy potatoes in preparation for planting, can affect potatoes and tomatoes. The symptoms of PSTVd can be seen in Figure 2.

IN SUMMARY: PRIONS AND VIROIDS

Prions are infectious agents that consist of protein, but no DNA or RNA, and seem to produce their deadly effects by duplicating their shapes and accumulating in tissues. They are thought to contribute to several progressive brain disorders, including mad cow disease and Creutzfeldt-Jakob disease. Viroids are single-stranded RNA pathogens that infect plants. Their presence can have a severe impact on the agriculture industry.