Distribution of Differences in Sample Proportions (1 of 5)

Our goal in this module is to use proportions to compare categorical data from two populations or two treatments.

It’s not about the values – it’s about how they are related!

Most of us get depressed from time to time. Depression is a normal part of life. Many people get over those feelings rather quickly. But some people carry the burden for weeks, months, or even years. For these people, feelings of depression can have a major impact on their lives. Depression can cause someone to perform poorly in school or work and can destroy relationships between relatives and friends.

Research suggests that teenagers in the United States are particularly vulnerable to depression. And, among teenagers, there appear to be differences between females and males. The Christchurch Health and Development Study (Fergusson, D. M., and L. J. Horwood, “The Christchurch Health and Development Study: Review of Findings on Child and Adolescent Mental Health,” Australian and New Zealand Journal of Psychiatry 35[3]:287–296), which began in 1977, suggests that the proportion of depressed females between ages 13 and 18 years is as high as 26%, compared to only 10% for males in the same age group.

Let’s assume that 26% of all female teens and 10% of all male teens in the United States are clinically depressed. In other words, assume that these values are both population proportions.

Graphically, we can compare these proportion using side-by-side ribbon charts:

Another study, the National Survey of Adolescents (Kilpatrick, D., K. Ruggiero, R. Acierno, B. Saunders, H. Resnick, and C. Best, “Violence and Risk of PTSD, Major Depression, Substance Abuse/Dependence, and Comorbidity: Results from the National Survey of Adolescents,” Journal of Consulting and Clinical Psychology 71[4]:692–700) found a 6% higher rate of depression in female teens than in male teens. Suppose that this result comes from a random sample of 64 female teens and 100 male teens. Let’s assume that 9 of the females are clinically depressed compared to 8 of the males. The proportion of females who are depressed, then, is 9/64 = 0.14. The proportion of males who are depressed is 8/100 = 0.08. The difference between the female and male sample proportions is 0.06, as reported by Kilpatrick and colleagues. We write this with symbols as follows:

A simulation is needed for this activity. Click here to open it in its own window.

This diagram illustrates our process here. Notice that we are sampling from populations with assumed parameter values, but we are investigating the difference in population proportions. From the simulation, we can judge only the likelihood that the actual difference of 0.06 comes from populations that differ by 0.16. We cannot make judgments about whether the female and male depression rates are 0.26 and 0.10 respectively. We can make a judgment only about whether the depression rate for female teens is 0.16 higher than the rate for male teens. This is what we meant by “It’s not about the values – it’s about how they are related!” 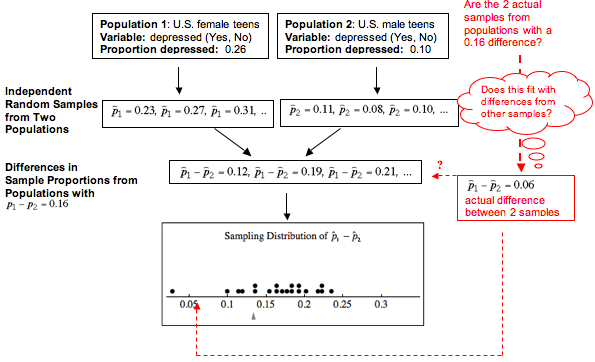