Hypothesis Test for a Population Mean (5 of 5)

Review of the Meaning of the P-value

At this point, we assume you know how to use a P-value to make a decision in a hypothesis test. The logic is always the same. If we pick a level of significance (α), then we compare the P-value to α.

In fact, we find that we treat these as “rules” and apply them without thinking about what the P-value means. So let’s pause here and review the meaning of the P-value, since it is the connection between probability and decision-making in inference.

Birth Weights in a Town

Let’s return to the familiar context of birth weights for babies in a town. Suppose that babies in the town had a mean birth weight of 3,500 grams in 2010. This year, a random sample of 50 babies has a mean weight of about 3,400 grams with a standard deviation of about 500 grams. Here is the distribution of birth weights in the sample.

We now know how to answer this question with a hypothesis test. Let’s use a significance level of 5%.

Let μ = mean birth weight in the town this year. The null hypothesis says there is “no change from 2010.”

Since the sample is large, we can conduct the T-test (without worrying about the shape of the distribution of birth weights for individual babies.)

Our conclusion: This sample does not suggest that the mean birth weight this year is less than 3,500 grams (P-value = 0.082). The sample from this year has a mean of 3,400 grams, which is 100 grams lower than the mean in 2010. But this difference is not statistically significant. It can be explained by the chance fluctuation we expect to see in random sampling. 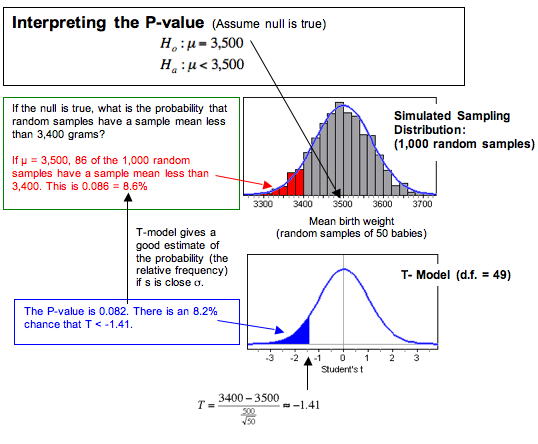 What Does a P-Value Mean?

Do women who smoke run the risk of shorter pregnancy and premature birth? The mean pregnancy length is 266 days. We test the following hypotheses.

Suppose a random sample of 40 women who smoke during their pregnancy have a mean pregnancy length of 260 days with a standard deviation of 21 days. The P-value is 0.04.

What probability does the P-value of 0.04 describe? Label each of the following interpretations as valid or invalid.

Review of Type I and Type II Errors

The following table summarizes the logic behind type I and type II errors.

General Guidelines for Choosing a Level of Significance

Let’s return to the investigation of the impact of smoking on pregnancy length.

Recap of the hypothesis test: The mean human pregnancy length is 266 days. We test the following hypotheses.

In this “Hypothesis Test for a Population Mean,” we looked at the four steps of a hypothesis test as they relate to a claim about a population mean.

Since the hypothesis test is based on probability, random selection or assignment is essential in data production. Additionally, we need to check whether the t-model is a good fit for the sampling distribution of sample means. To use the t-model, the variable must be normally distributed in the population or the sample size must be more than 30. In practice, it is often impossible to verify that the variable is normally distributed in the population. If this is the case and the sample size is not more than 30, researchers often use the t-model if the sample is not strongly skewed and does not have outliers.

The logic of the hypothesis test is always the same. To state a conclusion about H0, we compare the P-value to the significance level, α.