Inference for a Difference in Two Population Means

Conduct a hypothesis test or construct a confidence interval to investigate a difference between two population means. Interpret results in context.

It’s Not about the Values – It’s about How They Are Related!

Researchers select a random sample of 19 drivers and assign them randomly to one of two treatments. The 9 drivers in the treatment group each drink two beers. The 10 drivers assigned to the control group do not drink beer. The response variable is reaction time (measured in seconds). The reaction time is the time it takes the driver to hit the brakes in a driving simulator when an obstacle appears in the road. The random assignment guarantees, at least in theory, that the two groups are independent.

In this design, we calculate a mean and standard deviation in response time for each group. We use the difference in the sample means to either test a hypothesis about, or calculate a confidence interval for, a difference in two population means or two treatments.

Researchers randomly select 8 drivers. The experiment is a matched-pairs design with two measurements taken for each driver. The researchers measure the reaction times in the driving simulator before and then after the consumption of two beers. 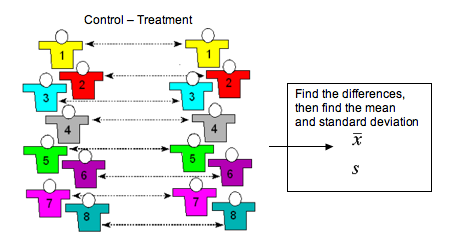 In this design, we first calculate the differences in the two measurements for each driver. Then we calculate the mean and standard deviation of this one list of numbers. We use the single sample mean to either test a hypothesis about, or calculate a confidence interval for, a single population or a treatment effect. This is one of the types of inference we did in the previous section, “Hypothesis Test for a Population Mean.”

Identify the situations that involve inference about a difference between two population means by choosing “valid” or “invalid.”