Hypothesis Test for a Population Proportion (3 of 3)

More about the P-Value

One More Note about P-Values and the Significance Level

You may wonder why 5% is often selected as the significance level in hypothesis testing and why 1% is also a commonly used level. It is largely due to just convenience and tradition. When Ronald Fisher (one of the founders of modern statistics) published one of his tables, he used a mathematically convenient scale that included 5% and 1%. Later, these same 5% and 1% levels were used by other people, in part just because Fisher was so highly esteemed. But mostly, these are arbitrary levels.

The idea of selecting some sort of relatively small cutoff was historically important in the development of statistics. But it’s important to remember that there is really a continuous range of increasing confidence toward the alternative hypothesis, not a single all-or-nothing value. There isn’t much meaningful difference, for instance, between the P-values 0.049 and 0.051, and it would be foolish to declare one case definitely a “real” effect and the other case definitely a “random” effect. In either case, the study results are roughly 5% likely by chance if there’s no actual effect.

Whether such a P-value is sufficient for us to reject a particular null hypothesis ultimately depends on the risk of making the wrong decision and the extent to which the hypothesized effect might contradict our prior experience or previous studies.

Consider our earlier example about teenagers and Internet access. According to the Kaiser Family Foundation, 84% of U.S. children ages 8 to 18 had Internet access at home as of August 2009. Researchers wonder if this number has changed since then. The hypotheses we tested were: 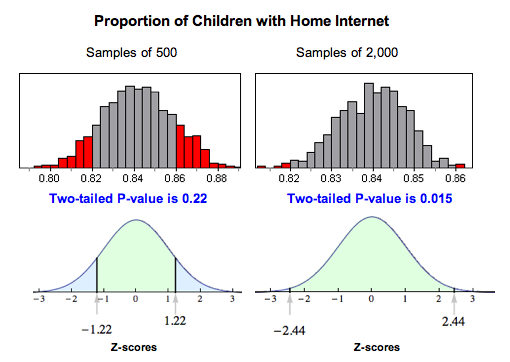 Why does this happen? Larger samples vary less, so a sample proportion of 0.86 is more unusual with larger samples than with smaller samples if the population proportion is really 0.84. This means that if the alternative hypothesis is true, a larger sample size will make it more likely that we reject the null. Therefore, we generally prefer a larger sample as we have seen previously.

It is tempting to get involved in the details of a hypothesis test without thinking about how the data was collected. Whether we are calculating a confidence interval or performing a hypothesis test, the results are meaningless without a properly designed study. Consider the following exercises about how data collection can affect the results of a study.

In this section, we looked at the four steps of a hypothesis test as they relate to a claim about a population proportion.

Since the hypothesis test is based on probability, random selection or assignment is essential in data production. Additionally, we need to check whether the sample proportion can be np ≥ 10 and n(1 − p) ≥ 10.

Remember that the P-value is the probability of seeing a sample proportion as extreme as the one observed from the data if the null hypothesis is true. The probability is about the random sample, not about the null or alternative hypothesis.

Finally, remember the phrase “garbage in, garbage out.” If the data collection methods are poor, then the results of a hypothesis test are meaningless. No statistical methods can create useful information if our data comes from convenience or voluntary response samples. Additionally, the results of a hypothesis test apply only to the population from whom the sample was chosen.