Interquartile Range and Boxplots (1 of 3)

Use a five-number summary and a boxplot to describe a distribution.

Recall that when we describe the distribution of a quantitative variable, we describe the overall pattern (shape, center, and spread) in the data and deviations from the pattern (outliers). In “Distributions for Quantitative Data” and “Measures of Center,” we focused on describing the shape and center of a distribution. We also investigated how the shape influences our choice of measurements of center. In “Quantifying Variability Relative to the Median” and Quantifying Variability Relative to the Mean,” we focus on describing the spread of a distribution more precisely. 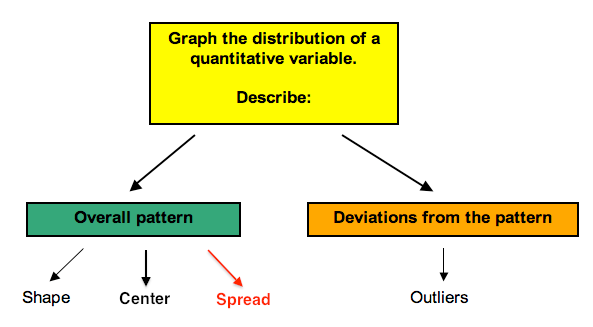 We begin with describing spread about the median.

The answer to this question depends on how we measure variability. Both distributions have the same range. The range is the distance spanned by the data. We calculate the range by subtracting the minimum value from the maximum value.

For both of these data sets, the range is 55 (here is how we calculated the range: 95 – 40 = 55). If we use the range to measure variability, we say the distributions have the same amount of variability.

Now we develop a way to measure the variability about the median. To do so, we use quartiles. Quartile marks divide the data set into four groups with equal counts.

Quartiles and the Interquartile Range

We added dividers to show the quartile marks for the two sets of exam scores. Quartile marks divide the data set into four subgroups with the same number of individuals in each subgroup.

Notice: For a data set, there is an equal amount of data in each quartile.

The quartiles together with the minimum and maximum scores give the five-number summary:

Notice: The second quartile mark (Q2) is the median.

Notice: Some quartiles exhibit more variability in the data even though each quartile contains the same amount of data.

Here is the IQR for these two distributions:

Using the IQR to Identify Outliers

We consider a point an outlier when it is substantially above Q3 or substantially below Q1. To make this statement more precise, we mark off a distance of 1.5 IQRs above Q3 and below Q1. Any point outside of this range is considered an outlier.

We can write this idea as a formula:

A value is an outlier when

To make more sense of this rule, let’s look at a visual example.

The points in purple are outliers by the IQR definition.