Interquartile Range and Boxplots (2 of 3)

On the previous page, we learned about the five-number summary. At this point, you should know the following:

Now we use the five-number summary to make a new type of graph, the boxplot. Boxplots are commonly used to summarize a distribution of a quantitative variable.

Here is the five-number summary for these two distributions:

To create the boxplot for each distribution,

Frequently, side-by-side boxplots are drawn vertically. Here we drew vertical dotplots with their boxplots for the exam scores from the two classes. 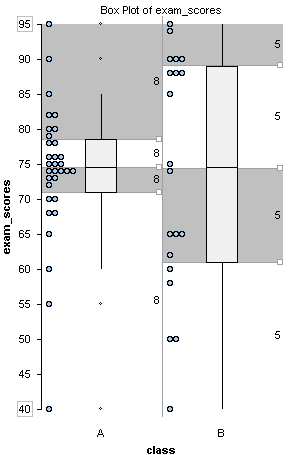 Now we walk through the steps for making a modified boxplot using the distribution of ages for winners of the Oscar Award for Best Actress from 1970 to 2001. The five-number summary for this distribution is

At this point, you should know how to

Here are four data sets that illustrate these ideas.

How are these data sets different? The data sets do not have the same number of data points. Also, the shape of each distribution is different.

The goal of the next Learn By Doing activity is to develop a deeper understanding of how the interquartile range (IQR) measures variability about the median. Use the simulation below for the next activity. You have used a similar simulation before. Recall the instructions for adding or removing data points: