A More Common Measure of Spread about the Mean: The Standard Deviation

Let’s consider the same data set we used on the previous page: 2, 2, 4, 5, 6, 7, 9. We already know that the mean is 5. We compute the standard deviation similarly to the way we compute the average deviation. We begin by computing the deviation of each point from the mean, but instead of taking the absolute value of the differences, we square them. Here are the steps:

The symbols in the expression are defined as follows:

Note: In the formula you can see

Let’s consider the same collection of cereals we worked with previously, except this time we’ll look at the calorie content. 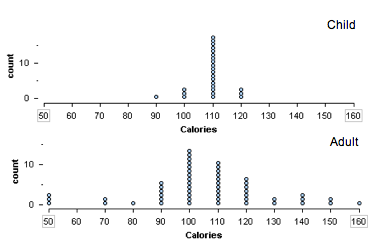