Deciding Which Measurements to Use

Our next examples show that the shape of the distribution and the presence of outliers helps us answer this question.

Homework Scores with an Outlier

Here are two summaries of the same set of homework scores earned by a student: a boxplot and an SD hatplot. Notice that the distribution of scores has an outlier. This student has mostly high homework scores with one score of 0. Here are some observations about the homework data.

The typical range of scores based on the first and third quartiles is 82 to 89.

Which is the better summary of the student’s performance on homework?

The typical range based on the mean and standard deviation is not a good summary of this student’s homework scores. Here we see that the outlier decreases the mean so that the mean is too low to be representative of this student’s typical performance. We also see that the outlier increases the standard deviation, which gives the impression of a wide variability in scores. This makes sense because the standard deviation measures the average deviation of the data from the mean. So a point that has a large deviation from the mean will increase the average of the deviations. In this example, a single score is responsible for giving the impression that the student’s typical homework scores are lower than they really are.

The typical range based on the first and third quartiles gives a better summary of this student’s performance on homework because the outlier does not affect the quartile marks.

In this example, we look at how skewness in a data set affects the standard deviation. The following histogram shows the personal income of a large sample of individuals drawn from U.S. census data in the year 2000. Notice that it is strongly skewed to the right. This type of skewness is often present in data sets of variables such as income. 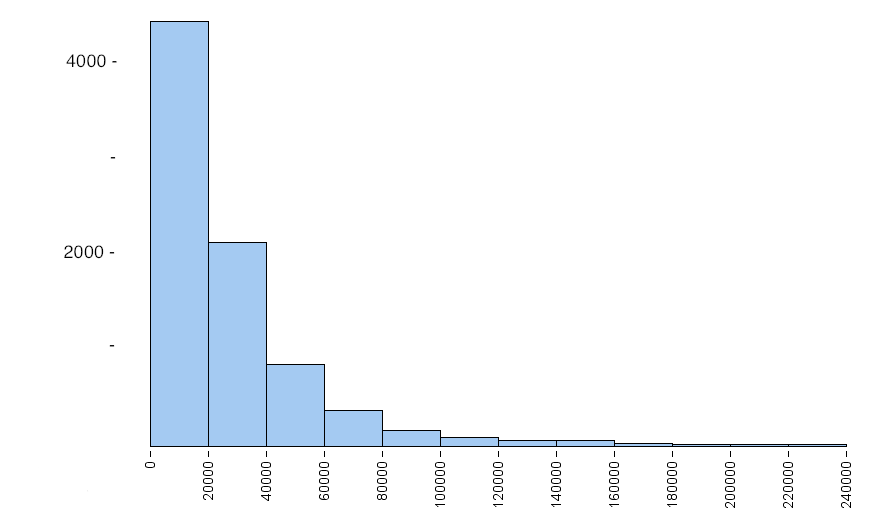 Following are some summary statistics for this data: 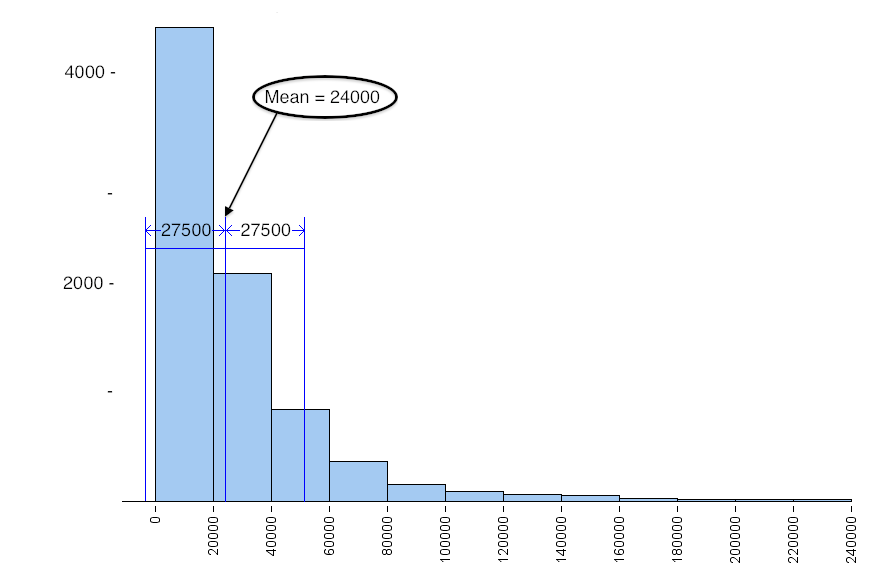 Let’s take a look at the same histogram, except this time we overlay a boxplot. 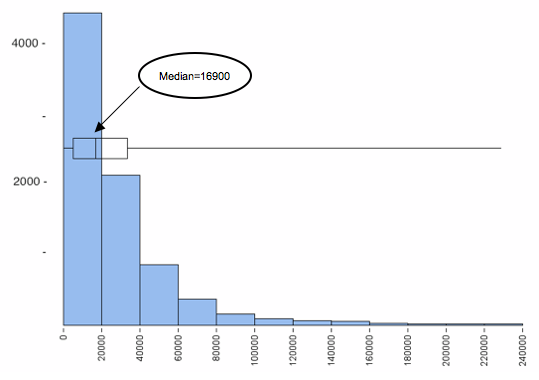 We see that the median represents the typical income of people in this sample better than the mean. The small number of people with higher incomes does not impact the median or the other quartile marks, so the first and third quartile marks give a range of incomes that more accurately represent typical incomes in the sample. Notice also that this range is always within the overall range of the data, so we will never have the problem that we encountered earlier with the standard deviation.

In a skewed distribution, the upper half and the lower half of the data have a different amount of spread, so no single number such as the standard deviation could describe the spread very well. We get a better understanding of how the values are distributed if we use the quartiles and the two extreme values in the five-number summary.

These examples illustrate some general guidelines for choosing numerical summaries:

Both of these examples also highlight another important principle: Always plot the data.

We need to use a graph to determine the shape of the distribution. By looking at the shape, we can determine which measures of center and spread best describe the data.