Here we continue our chi-square test of independence for the variables gender and body image in the population of U.S. college students.

Here are our hypotheses from the previous page:

Calculating Expected Values for a Test of Independence

Expected counts always describe what we expect to see in a sample if the null hypothesis is true. In this situation, if gender and body image are independent, then we expect the probability that a student answers “about right” in the sample to be the same probability that a male (or a female) student answers “about right” (similarly for “overweight” or “underweight” responses).

Here are the calculations of expected counts for the response “about right”:

Here are the calculations of expected counts for the response “overweight”:

More on Gender and Body Image

Since the data meets the conditions, we can proceed with calculating χ2 test statistic.

We calculate the chi-square test statistic as we did in “Chi-Square Test for One-Way Tables.”

We will use technology to calculate the chi-square value. But for this sample, we will show the calculation.

For a chi-square tests based on two-way tables, the degrees of freedom are 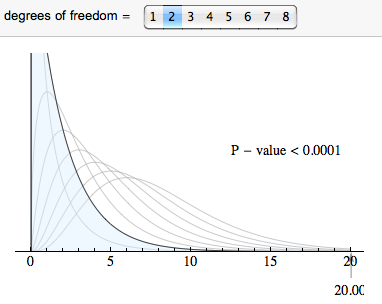 More on Gender and Body Piercing

A study was done on the relationship between gender and ear piercing among high-school students. A sample of 1,000 students was chosen, then classified according to both gender and whether or not they had either of their ears pierced. The following information is available: