We can answer the following research questions with a chi-square test of independence:

What is your perception of your own body? Do you feel that you are overweight, underweight, or about right? A random sample of 1,200 U.S. college students answered this question as part of a larger survey. The following table shows part of the responses.

Notice that the sample is a random sample from a single population: U.S. college students. Notice also that we collected data on two categorical variables for each student: gender and body image. This is the type of situation that is appropriate for a chi-square test of independence.

Here are two equivalent ways we can state the hypotheses for a test of independence.

We summarized the data for this sample in a two-way table:

To investigate the relationship between gender and body image, we compare the percentage of males and females who gave each body image response. In Relationships in Categorical Data with Intro to Probability, we called these conditional percentages.

We graphed these conditional percentages using ribbon charts for a visual comparison. In this sample, we can see that a larger percentage of females (73.7%) than males (67%) perceive their body weight to be “about right.” A larger percentage of females (21.4%) than males (16.4%) also perceive themselves to be overweight. Males are as likely to say they are overweight (16.4%) as underweight (16.6%), but females as much less likely to perceive themselves to be underweight (4.9%). 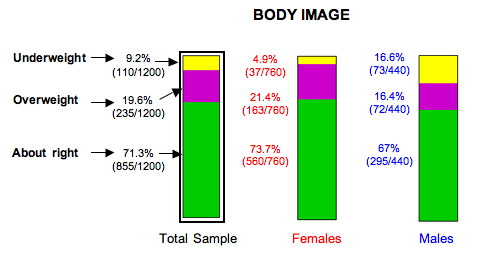 What do these conditional percentages have to do with independence?

For example, we would expect the following probabilities to be the same if gender and body image are independent variables.

Obviously, when we compare the conditional percentages for males and females in this sample, we see that they differ. But do they differ enough to conclude that variables are dependent? Or could these results have come from a population where gender and body image are independent? In which case, the differences are due to chance fluctuation that happens in random sampling. We need to conduct a test of independence to find out.

Some firefighters and other first responders to the World Trade Center on September 11, 2001, have experienced symptoms of traumatic stress, depression, anxiety, and drinking problems. Cornell University researchers conducted a survey of a random sample of New York firefighters, some of whom had participated in the 9/11 rescue efforts. The report’s title is “On the Front Line: The Work of First Responders in a Post-9/11 World.” To see the report, click here. We use data from this report to investigate the question: Are alcohol-related problems among New York firefighters associated with participation in the 9/11 rescue?