For this assignment, we’ll take a deeper look at some of the experimentation used in Carol Dweck’s research about Growth Mindsets.

Notice in Figure 1 below that the students praised for ability were about 20% MORE likely to choose easy problems than those in the control condition. This suggests that praise focused on ability increases the likelihood that that child will select a practice set that is well within his or her existing ability. 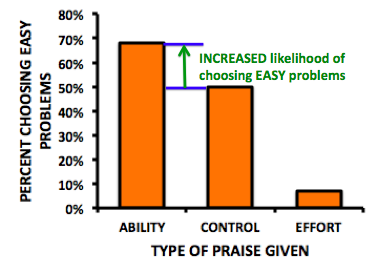 Figure 1. Notice the increased likelihood for students to choose easy problems if they were praised for their abilities, as compared with the control group.

Now look at the next figure (below), again using the control condition as your starting point. Praise for effort has had the opposite effect than praise for ability. Now the students are more than 40% less likely to choose easy problems—or, in other words, more than 40% more likely to choose challenging problems, even if they may fail at a lot of those problems. 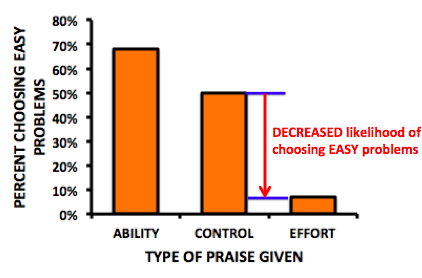 Figure 2. Notice the decreased likelihood for students to choose easy problems if they were praised for their effort, as compared with the control group.

Using a control condition properly doesn’t necessarily change your interpretation of the results, but it can give you a richer, more interesting view of the results. From this data so far, we can conclude that:

Now imagine that the results had produced the pattern shown in the graph below. (These are not the correct results, but see if you can apply what you just learned about control conditions when interpreting the graph.)

Look at it closely, then let’s interpret the results. What does the bar graph tell us? 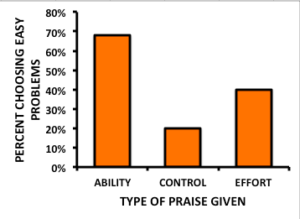 For this assignment, you’ll interpret two hypothetical results, shown as bar graphs, from Dweck’s experiment about types of praise.

Part 1: Analyze the graph below. If 80% of the control group, given generic praise, chose easy questions, then what inferences can we make about praise given for ability and praise given for effort? 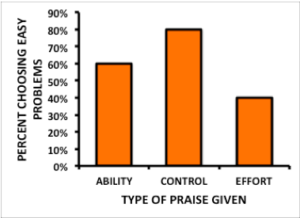 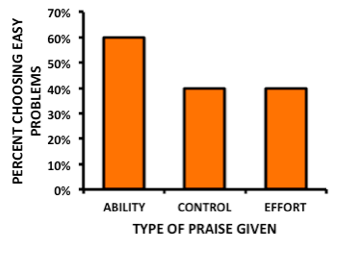 Part 3: Write a summary paragraph describing the importance of the control group in interpreting results to psychological experiments. Why was the control group essential to the conclusion reached in Dweck’s research about mindset?