Before we explore the various approaches to therapy used today, let’s begin our study of therapy by looking at how many people experience mental illness and how many receive treatment. According to the U.S. Department of Health and Human Services (2017), 18.9% of U.S. adults experienced mental illness in 2017. For teens (ages 13–18), the rate is similar to that of adults, and for children ages 8–15, current estimates suggest that approximately 13% experience mental illness in a given year (National Institute of Mental Health [NIMH], 2017).

With many different treatment options available, approximately how many people receive mental health treatment per year? According to the Substance Abuse and Mental Health Services Administration (SAMHSA), in 2017, 14.8% of adults received treatment for a mental health issue (NIMH, 2017). These percentages, shown in Figure 1, reflect the number of adults who received care in inpatient and outpatient settings and/or used prescription medication for psychological disorders. 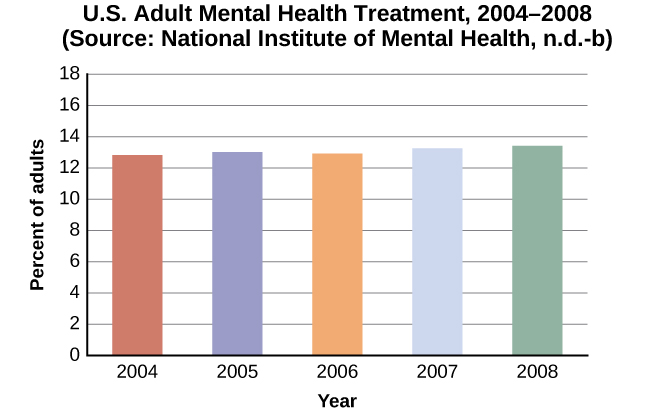 Figure 1. The percentage of adults who received mental health treatment in 2004–2008 is shown. Adults seeking treatment increased slightly from 2004 to 2008.

Children and adolescents also receive mental health services. The Centers for Disease Control and Prevention’s National Health and Nutrition Examination Survey (NHANES) found that approximately half (50.6%) of children with mental disorders had received treatment for their disorder within the past year (NIMH, n.d.-c). However, there were some differences between treatment rates by category of disorder (Figure 2). For example, children with anxiety disorders were least likely to have received treatment in the past year, while children with ADHD or a conduct disorder were more likely to receive treatment. Can you think of some possible reasons for these differences in receiving treatment? 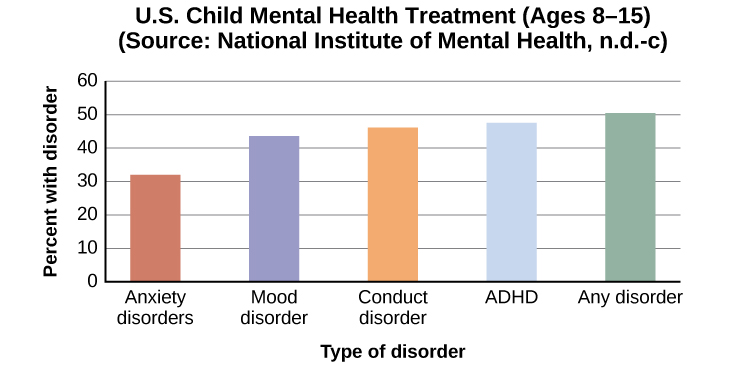 Figure 2. About one-third to one-half of U.S. adolescents (ages 8–15) with mental disorders receive treatment, with behavior-related disorders more likely to be treated.

Today, there are community mental health centers across the nation. They are located in neighborhoods near the homes of clients, and they provide large numbers of people with mental health services of various kinds and for many kinds of problems. Unfortunately, part of what occurred with deinstitutionalization was that those released from institutions were supposed to go to newly created centers, but the system was not set up effectively. Centers were underfunded, staff was not trained to handle severe illnesses such as schizophrenia, there was high staff burnout, and no provision was made for the other services people needed, such as housing, food, and job training. Without these supports, those people released under deinstitutionalization often ended up homeless. Even today, a large portion of the homeless population is considered to be mentally ill (Figure 3). Statistics show that 26% of homeless adults living in shelters experience mental illness (U.S. Department of Housing and Urban Development [HUD], 2011).

Another group of the mentally ill population is involved in the corrections system. According to a 2006 special report by the Bureau of Justice Statistics (BJS), approximately 705,600 mentally ill adults were incarcerated in the state prison system, and another 78,800 were incarcerated in the federal prison system. A further 479,000 were in local jails. According to the study, “people with mental illnesses are overrepresented in probation and parole populations at estimated rates ranging from two to four times the general population” (Prins & Draper, 2009, p. 23). The Treatment Advocacy Center reported that the growing number of mentally ill inmates has placed a burden on the correctional system (Torrey et al., 2014).

Today, instead of asylums, there are psychiatric hospitals run by state governments and local community hospitals focused on short-term care. In all types of hospitals, the emphasis is on short-term stays, with the average length of stay being less than two weeks and often only several days. This is partly due to the very high cost of psychiatric hospitalization, which can be about $800 to $1000 per night (Stensland, Watson, & Grazier, 2012). Therefore, insurance coverage often limits the length of time a person can be hospitalized for treatment. Usually individuals are hospitalized only if they are an imminent threat to themselves or others.

Most people suffering from mental illnesses are not hospitalized. If someone is feeling very depressed, complains of hearing voices, or feels anxious all the time, he or she might seek psychological treatment. A friend, spouse, or parent might refer someone for treatment. The individual might go see his primary care physician first and then be referred to a mental health practitioner.

Some people seek treatment because they are involved with the state’s child protective services—that is, their children have been removed from their care due to abuse or neglect. The parents might be referred to psychiatric or substance abuse facilities and the children would likely receive treatment for trauma. If the parents are interested in and capable of becoming better parents, the goal of treatment might be family reunification. For other children whose parents are unable to change—for example, the parent or parents who are heavily addicted to drugs and refuse to enter treatment—the goal of therapy might be to help the children adjust to foster care and/or adoption (Figure 4).

Some people seek therapy because the criminal justice system referred them or required them to go. For some individuals, for example, attending weekly counseling sessions might be a condition of parole. If an individual is mandated to attend therapy, she is seeking services involuntarily. Involuntary treatment refers to therapy that is not the individual’s choice. Other individuals might voluntarily seek treatment. Voluntary treatment means the person chooses to attend therapy to obtain relief from symptoms.

Psychological treatment can occur in a variety of places. An individual might go to a community mental health center or a practitioner in private or community practice. A child might see a school counselor, school psychologist, or school social worker. An incarcerated person might receive group therapy in prison. There are many different types of treatment providers, and licensing requirements vary from state to state. Besides psychologists and psychiatrists, there are clinical social workers, marriage and family therapists, and trained religious personnel who also perform counseling and therapy.

A range of funding sources pay for mental health treatment: health insurance, government, and private pay. In the past, even when people had health insurance, the coverage would not always pay for mental health services. This changed with the Mental Health Parity and Addiction Equity Act of 2008, which requires group health plans and insurers to make sure there is parity of mental health services (U.S. Department of Labor, n.d.). This means that co-pays, total number of visits, and deductibles for mental health and substance abuse treatment need to be equal to and cannot be more restrictive or harsher than those for physical illnesses and medical/surgical problems.

Finding treatment sources is also not always easy: there may be limited options, especially in rural areas and low-income urban areas; waiting lists; poor quality of care available for indigent patients; and financial obstacles such as co-pays, deductibles, and time off from work. Over 85% of the l,669 federally designated mental health professional shortage areas are rural; often primary care physicians and law enforcement are the first-line mental health providers (Ivey, Scheffler, & Zazzali, 1998), although they do not have the specialized training of a mental health professional, who often would be better equipped to provide care. Availability, accessibility, and acceptability (the stigma attached to mental illness) are all problems in rural areas. Approximately two-thirds of those with symptoms receive no care at all (U.S. Department of Health and Human Services, 2005; Wagenfeld, Murray, Mohatt, & DeBruiynb, 1994). At the end of 2013, the U.S. Department of Agriculture announced an investment of $50 million to help improve access and treatment for mental health problems as part of the Obama administration’s effort to strengthen rural communities.