Putting It Together: Psychological Foundations

Psychology is a rapidly growing and ever-evolving field of study. In this module, you learned about its roots in early philosophy and the development of psychology as a distinct field of study in the late 1800s. Since that time, various schools of psychology have dominated the scene at different points in time, from structuralism and functionalism, to Freud’s psychodynamic theory, behaviorism, humanism, and the cognitive revolution. In modern psychology, researchers and practitioners consider some of these historical approaches but also approach the study of mind and behavior through a variety of lenses, including biological, cognitive, developmental, social, and health perspectives.

Watch the following Crash Course Psychology video for a good recap of the topics covered in this module:

You can view the transcript for “Intro to Psychology: Crash Course Psychology #1” here (opens in new window).

Consider a fascinating example of psychological research conducted by an Assistant Professor of Cognitive Psychology at Oberlin College, Paul Thibodeau. His focus is on language, specifically how people utilize metaphors and analogies, but he did one study on word aversion that he explains in his own words in the following example. As you read it, consider the breadth of coverage that psychologists cover as well as the importance of the scientific method and research to the investigative process. We’ll learn more about experiments and psychological research in the next module, but if you could design a psychological study based on the topics that piqued your interest in this text so far, what would it be? Where do your interests lie? Remember, there are nearly endless possibilities for research within the vast field of psychology, and studying the subject will serve to your advantage, no matter your chosen field or career path.

If you had to pick the most cringeworthy word in the English language, what would you choose? Many people report that they find words like “moist,” “crevice,” “slacks,” and “luggage” acutely aversive, so maybe you’d pick one of those. For instance, People Magazine recently coined “moist” the “most cringeworthy word” in American English and invited their “sexiest men alive” to try to make it sound “hot” (watch the moist video here).

One writer, in response, described the video as “…pure sadism. It’s torture, it’s rude, and it’s awful…” and claimed that the only way to overcome the experience was to “go Oedipal and gouge your eyes out”. Indeed, readers who find the word “moist” aversive may experience some unpleasantness in reading this paper.

Researcher Paul H. Thibodeau sought to understand how prevalent the aversion to the word “moist” really is, and what makes it so unappealing. He conducted five experiments with over 2,500 participants, and found that about 18% of participants found the word to be aversive. He first hypothesized why people might find the word aversive—is it the sound? Or the connotation and meaning? Or is it due to social expectations and social transmission?

The experiments shows that aversion was most likely due to both social causes and its connotation, as it may be associated with bodily functions. The study found that people who scored highest on their levels of digust toward bodily functions also scored high on their dislike for the word moist. The same people found words like vomit and phlegm to be aversive, but were less affected by similar-sounding words (“hoist”) or by words related to sex. 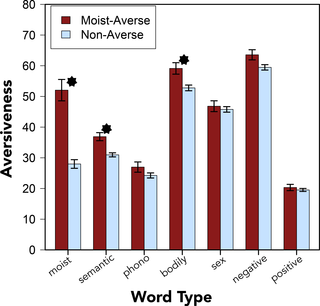 Figure 1. This graph shows ratings of participants who described themselves as moist-averse and their levels of aversiveness towards words from six different lexical categories—similar-meaning words, similar-sounding words, bodily-related words, sex-related words, and words with either negative or positive associations. Asterisks indicate statistically significant differences at the p < .05 level.

Often when people were asked to describe why they felt aversion toward the word, they mentioned that they didn’t like the way it sounded. The data reveal, however, that people are not averse to phonetically similar words. Interestingly, other people guessed that people felt an aversion to moist because of its association with sex, but the data also reveal that the word’s connection to sex is not what makes it cringeworthy. It’s important to point out here that one reason research is so valuable is that it contradicts common sense notions and helps us better understand human behavior.

Another piece of evidence supporting the social transmission of the word aversion is that in the study, some participants first watched the People Magazine video of celebrities saying “moist,” while others watched a control video. Those who watched the video found the word more aversive, and negative than those who did not. Dr. Thibodeau summarizes lessons learned from the study as follows:[1]

There are a few important lessons to be learned from these studies. Two are fairly obvious: we now have a better sense of what makes the word “moist” aversive and another demonstration that we’re not particularly good at reflecting accurately on why we think what we think.

More relevant to broader theories in psychology, the work has implications for theories of language processing and the psychology of disgust. Emotional language is processed differently than “neutral” language: it grabs our attention, engages different parts of the brain, and is more likely to be remembered. This can be good or bad: cake mixes that advertise themselves as “moist” may make some people more likely to buy them because they catch our eye, but they may make us less likely to buy them because of the word’s association with disgusting bodily function (an open question).

Disgust is adaptive. If we didn’t have an instinct to run away from vomit and diarrhea, disease would spread more easily. But is this instinct biological or do we learn it? Does our culture shape what we find disgusting? This is a complex and nuanced question. Significant work is needed to answer it definitively. But the present studies suggest that, when it comes to the disgust that is elicited by words like “moist,” there is an important cultural component—the symbols we use to communicate with one another can become contaminated and elicit disgust by virtue of their association with bodily functions.