Sleep is not a uniform state of being. Instead, sleep is composed of several different stages that can be differentiated from one another by the patterns of brain wave activity that occur during each stage. These changes in brain wave activity can be visualized using EEG and are distinguished from one another by both the frequency and amplitude of brain waves. Sleep can be divided into two different general phases: REM sleep and non-REM (NREM) sleep. Rapid eye movement (REM) sleep is characterized by darting movements of the eyes under closed eyelids. Brain waves during REM sleep appear very similar to brain waves during wakefulness. In contrast, non-REM (NREM) sleep is subdivided into three stages distinguished from each other and from wakefulness by characteristic patterns of brain waves. The first three stages of sleep are NREM sleep, while the fourth and final stage of sleep is REM sleep. In this section, we will discuss each of these stages of sleep and their associated patterns of brain wave activity.

[Note that psychologists originally identified four stages of non-REM sleep, but these were revised in 2008, resulting in just three distinct phases of NREM sleep. You will see that stage 3 of NREM sleep is sometimes presented as both stage 3 and stage 4 in various texts.]

The first stage of NREM sleep is known as stage 1 sleep. Stage 1 sleep is a transitional phase that occurs between wakefulness and sleep, the period during which we drift off to sleep. During this time, there is a slowdown in both the rates of respiration and heartbeat. In addition, stage 1 sleep involves a marked decrease in both overall muscle tension and core body temperature. 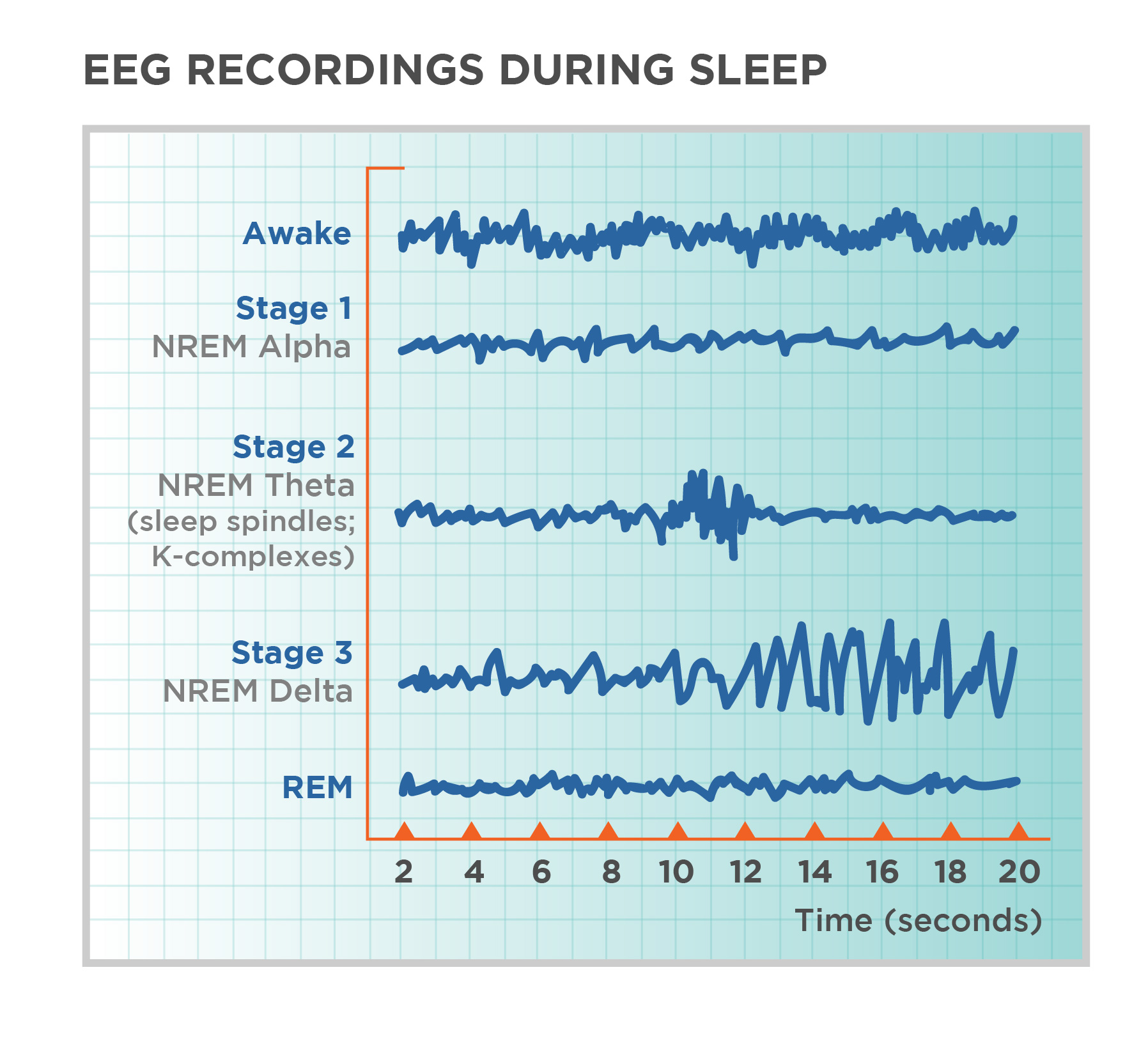 As we move into stage 2 sleep, the body goes into a state of deep relaxation. Theta waves still dominate the activity of the brain, but they are interrupted by brief bursts of activity known as sleep spindles (Figure 3). A sleep spindle is a rapid burst of higher frequency brain waves that may be important for learning and memory (Fogel & Smith, 2011; Poe, Walsh, & Bjorness, 2010). In addition, the appearance of K-complexes is often associated with stage 2 sleep. A K-complex is a very high amplitude pattern of brain activity that may in some cases occur in response to environmental stimuli. Thus, K-complexes might serve as a bridge to higher levels of arousal in response to what is going on in our environments (Halász, 1993; Steriade & Amzica, 1998).

Stage 3 of sleep is often referred to as deep sleep or slow-wave sleep because these stages are characterized by low frequency (less than 3 Hz), high amplitude delta waves (Figure 4). During this time, an individual’s heart rate and respiration slow dramatically. It is much more difficult to awaken someone from sleep during stage 3 than during earlier stages. Interestingly, individuals who have increased levels of alpha brain wave activity (more often associated with wakefulness and transition into stage 1 sleep) during stage 3 often report that they do not feel refreshed upon waking, regardless of how long they slept (Stone, Taylor, McCrae, Kalsekar, & Lichstein, 2008). 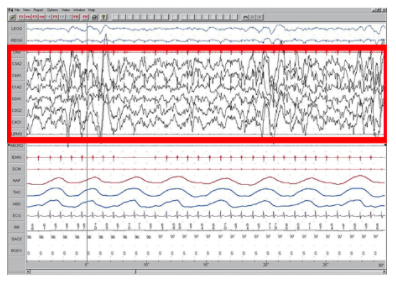 As mentioned earlier, REM sleep is marked by rapid movements of the eyes. The brain waves associated with this stage of sleep are very similar to those observed when a person is awake, as shown in Figure 5, and this is the period of sleep in which dreaming occurs. It is also associated with paralysis of muscle systems in the body with the exception of those that make circulation and respiration possible. Therefore, no movement of voluntary muscles occurs during REM sleep in a normal individual; REM sleep is often referred to as paradoxical sleep because of this combination of high brain activity and lack of muscle tone. Like NREM sleep, REM has been implicated in various aspects of learning and memory (Wagner, Gais, & Born, 2001), although there is disagreement within the scientific community about how important both NREM and REM sleep are for normal learning and memory (Siegel, 2001). 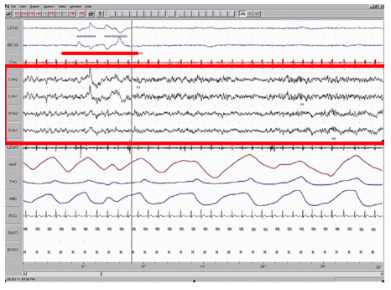 Figure 5. A period of rapid eye movement is marked by the short red line segment. The brain waves associated with REM sleep, outlined in the red box, look very similar to those seen during wakefulness.

If people are deprived of REM sleep and then allowed to sleep without disturbance, they will spend more time in REM sleep in what would appear to be an effort to recoup the lost time in REM. This is known as the REM rebound, and it suggests that REM sleep is also homeostatically regulated. Aside from the role that REM sleep may play in processes related to learning and memory, REM sleep may also be involved in emotional processing and regulation. In such instances, REM rebound may actually represent an adaptive response to stress in nondepressed individuals by suppressing the emotional salience of aversive events that occurred in wakefulness (Suchecki, Tiba, & Machado, 2012). Sleep deprivation in general is associated with a number of negative consequences (Brown, 2012).

Figure 6. This hypnogram illustrates how an individual moves through the various stages of sleep. Deeper NREM sleep occurs early on in the night, while the duration of REM sleep increases as the night progresses.

Researchers believe that one important function of sleep is to facilitate learning and memory. How does knowing this help you in your college studies? What changes could you make to your study and sleep habits to maximize your mastery of the material covered in class?