A professor is attempting to identify trends among final exam scores. His class has a mixture of students, so he wonders if there is any relationship between age and final exam scores. One way for him to analyze the scores is by creating a diagram that relates the age of each student to the exam score received. In this section, we will examine one such diagram known as a scatter plot.

A scatter plot is a graph of plotted points that may show a relationship between two sets of data. If the relationship is from a linear model, or a model that is nearly linear, the professor can draw conclusions using his knowledge of linear functions. Below is a sample scatter plot. 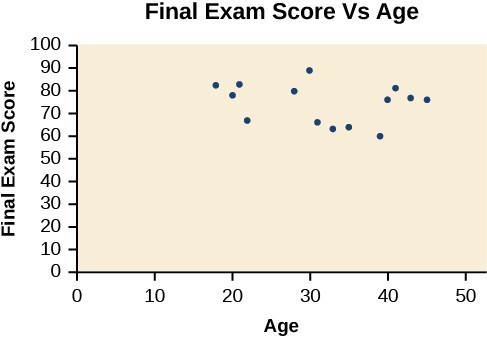 A scatter plot of age and final exam score variables.

Notice this scatter plot does not indicate a linear relationship. The points do not appear to follow a trend. In other words, there does not appear to be a relationship between the age of the student and the score on the final exam.

The table below shows the number of cricket chirps in 15 seconds, for several different air temperatures, in degrees Fahrenheit.[1] Plot this data and determine whether the data appears to be linearly related.

Plotting this data suggests that there may be a trend. We can see from the trend in the data that the number of chirps increases as the temperature increases. The trend appears to be roughly linear, though certainly not perfectly so. 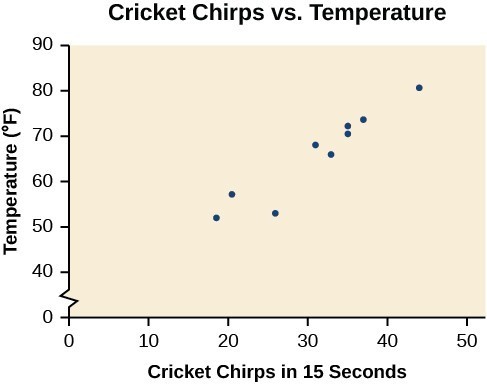 Finding the Line of Best Fit

One way to approximate our linear function is to sketch the line that seems to best fit the data. Then we can extend the line until we can verify the y-intercept. We can approximate the slope of the line by extending it until we can estimate the [latex]\frac{\text{rise}}{\text{run}}[/latex].

Find a linear function that fits the data in the table below by “eyeballing” a line that seems to fit.

On a graph, we could try sketching a line.

where c is the number of chirps in 15 seconds, and T(c) is the temperature in degrees Fahrenheit. The resulting equation is represented in the graph below. 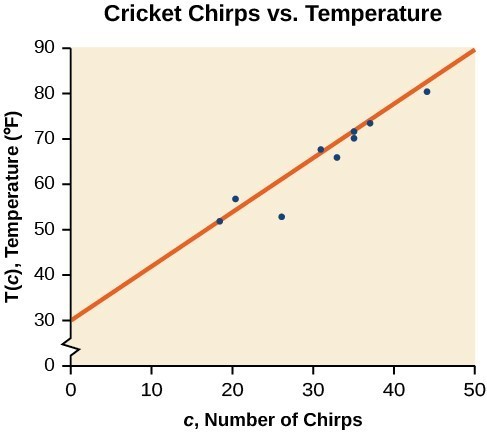 This linear equation can then be used to approximate answers to various questions we might ask about the trend.

There is a difference between making predictions inside the domain and range of values for which we have data and outside that domain and range. Predicting a value outside of the domain and range has its limitations. When our model no longer applies after a certain point, it is sometimes called model breakdown. For example, predicting a cost function for a period of two years may involve examining the data where the input is the time in years and the output is the cost. But if we try to extrapolate a cost when [latex]x=50[/latex], that is, in 50 years, the model would not apply because we could not account for factors fifty years in the future. 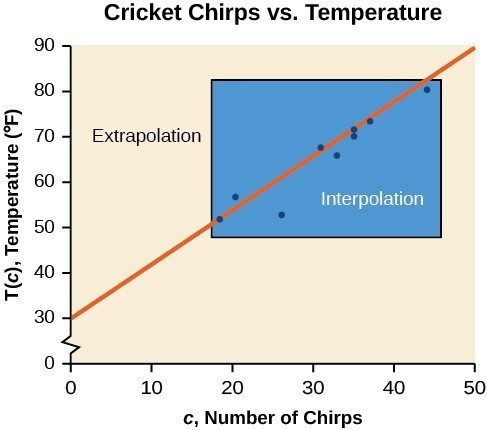 A General Note: Interpolation and Extrapolation

Different methods of making predictions are used to analyze data.

Use the cricket data above to answer the following questions:

We can compare the regions of interpolation and extrapolation using the graph below. 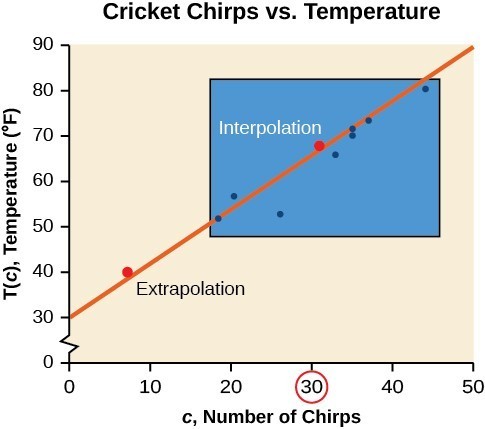 Our model predicts the crickets would chirp 8.33 times in 15 seconds. While this might be possible, we have no reason to believe our model is valid outside the domain and range. In fact, generally crickets stop chirping altogether at or below 50 degrees.

According to the data from the table in the cricket-chirp example, what temperature can we predict if we counted 20 chirps in 15 seconds?

Finding the Line of Best Fit Using a Graphing Utility

While eyeballing a line works reasonably well, there are statistical techniques for fitting a line to data that minimize the differences between the line and data values.[2] One such technique is called least squares regression and can be computed by many graphing calculators as well as both spreadsheet and statistical software. Least squares regression is also called linear regression.

Find the least squares regression line using the cricket-chirp data in the table below.

Notice that this line is quite similar to the equation we “eyeballed” but should fit the data better. Notice also that using this equation would change our prediction for the temperature when hearing 30 chirps in 15 seconds from 66 degrees to:

The graph of the scatter plot with the least squares regression line is shown below:

Will there ever be a case where two different lines will serve as the best fit for the data?

No. There is only one best fit line.

Distinguish Between Linear and Nonlinear Relations

The correlation coefficient is a value, r, between –1 and 1.

Calculate the correlation coefficient for cricket-chirp data in the table below.

Use a Linear Model to Make Predictions

Once we determine that a set of data is linear using the correlation coefficient, we can use the regression line to make predictions. As we learned previously, a regression line is a line that is closest to the data in the scatter plot, which means that only one such line is a best fit for the data.

Gasoline consumption in the United States has been steadily increasing. Consumption data from 1994 to 2004 is shown in the table below.[3] Determine whether the trend is linear, and if so, find a model for the data. Use the model to predict the consumption in 2008.Is this an interpolation or an extrapolation?

Use your calculator or statistical software to create the equation for the regression line:

The correlation coefficient was calculated to be 0.997, suggesting a very strong increasing linear trend.

The model predicts 144.244 billion gallons of gasoline consumption in 2008. This is an extrapolation because there is not a datapoint whose x1 value is 2008.
The scatter plot of the data, including the least squares regression line, is shown below.

Use your calculator or statistical software to find a linear regression for the following data, which represents the amount of time a scuba diver can spend underwater as a function of the depth of the water.

1) Write the equation for the least squares regression line.

2) According to the regression line, how long can a diver spend at a depth of 110 feet?

4) At what depth would the dive time be zero?

Here are more data sets that you can plot in your calculator or statistical software.  Fit a linear regression for them then interpret the correlation coefficient to determine whether there appears to be a linear relationship.

Divers who want or need to descend to depths greater than 100 feet employ different techniques and equipment to help them safely navigate the depth. For example, different gas mixtures or rebreather equipment may be used.  Gas mixtures such as oxygen, helium, and nitrogen can help to mitigate the narcotic effects of breathing gas at great depths.[4] 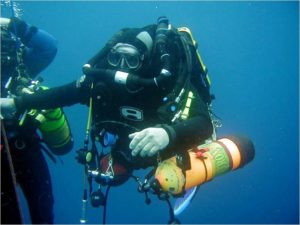