When modeling scenarios with linear functions and solving problems involving quantities with a constant rate of change, we typically follow the same problem solving strategies that we would use for any type of function. Let’s briefly review them:

Now let’s take a look at the student in Seattle. In her situation, there are two changing quantities: time and money. The amount of money she has remaining while on vacation depends on how long she stays. We can use this information to define our variables, including units.

We can also identify the initial value and the rate of change.

Notice that the unit of dollars per week matches the unit of our output variable divided by our input variable. Also, because the slope is negative, the linear function is decreasing. This should make sense because she is spending money each week.

The rate of change is constant, so we can start with the linear model [latex]M(t)=mt+b[/latex]. Then we can substitute the intercept and slope provided.

To find the x-intercept, we set the output to zero and solve for the input.

The x-intercept is 8.75 weeks. Because this represents the input value when the output will be zero, we could say that Emily will have no money left after 8.75 weeks.

When modeling any real-life scenario with functions, there is typically a limited domain over which that model will be valid—almost no trend continues indefinitely. Here the domain refers to the number of weeks. In this case, it doesn’t make sense to talk about input values less than zero. A negative input value could refer to a number of weeks before she saved $3,500, but the scenario discussed poses the question once she saved $3,500 because this is when her trip and subsequent spending starts. It is also likely that this model is not valid after the x-intercept, unless Emily will use a credit card and goes into debt. The domain represents the set of input values, so the reasonable domain for this function is [latex]0\le t\le 8.75[/latex].

Using a Given Intercept to Build a Model

Now we can set the function equal to 0 and solve for x to find the x-intercept.

Using a Given Input and Output to Build a Model

Many real-world applications are not as direct as the ones we just considered. Instead they require us to identify some aspect of a linear function. We might sometimes be asked to evaluate the linear model at a given input or set the equation of the linear model equal to a specified output.

How To: Given a word problem that includes two pairs of input and output values, use the linear function to solve a problem.

Example: Using a Linear Model to Investigate a Town’s Population

The two changing quantities are the population size and time. While we could use the actual year value as the input quantity, doing so tends to lead to very cumbersome equations because the y-intercept would correspond to the year 0, more than 2000 years ago!

To make computation a little nicer, we will define our input as the number of years since 2004:

To predict the population in 2013 (t = 9), we would first need an equation for the population. Likewise, to find when the population would reach 15,000, we would need to solve for the input that would provide an output of 15,000. To write an equation, we need the initial value and the rate of change, or slope.

To determine the rate of change, we will use the change in output per change in input.

The problem gives us two input-output pairs. Converting them to match our defined variables, the year 2004 would correspond to [latex]t=0[/latex], giving the point [latex]\left(0,\text{6200}\right)[/latex]. Notice that through our clever choice of variable definition, we have “given” ourselves the y-intercept of the function. The year 2009 would correspond to [latex]t=\text{5}[/latex], giving the point [latex]\left(5,\text{8100}\right)[/latex].

A company sells doughnuts. They incur a fixed cost of $25,000 for rent, insurance, and other expenses. It costs $0.25 to produce each doughnut.

Using a Diagram to Model a Problem

It is useful for many real-world applications to draw a picture to gain a sense of how the variables representing the input and output may be used to answer a question. To draw the picture, first consider what the problem is asking for. Then, determine the input and the output. The diagram should relate the variables. Often, geometric shapes or figures are drawn. Distances are often traced out. If a right triangle is sketched, the Pythagorean Theorem relates the sides. If a rectangle is sketched, labeling width and height is helpful.

Anna and Emanuel start at the same intersection. Anna walks east at 4 miles per hour while Emanuel walks south at 3 miles per hour. They are communicating with a two-way radio that has a range of 2 miles. How long after they start walking will they fall out of radio contact?

In essence, we can partially answer this question by saying they will fall out of radio contact when they are 2 miles apart, which leads us to ask a new question: “How long will it take them to be 2 miles apart?”

In this problem, our changing quantities are time and position, but ultimately we need to know how long will it take for them to be 2 miles apart. We can see that time will be our input variable, so we’ll define our input and output variables.

Because it is not obvious how to define our output variable, we’ll start by drawing a picture. 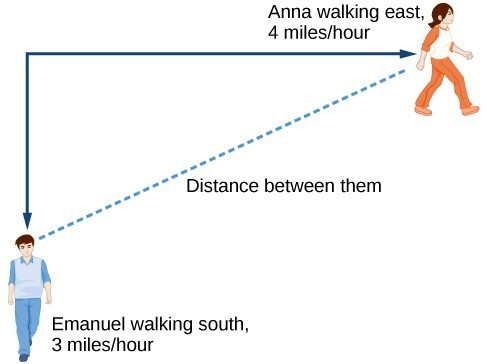 Initial Value: They both start at the same intersection so when [latex]t=0[/latex], the distance traveled by each person should also be 0. Thus the initial value for each is 0.

Using those values, we can write formulas for the distance each person has walked.

We can then define a third variable, D, to be the measurement of the distance between Anna and Emanuel. Showing the variables on the diagram is often helpful.

Recall that we need to know how long it takes for D, the distance between them, to equal 2 miles. Notice that for any given input t, the outputs A(t), E(t), and D(t) represent distances. 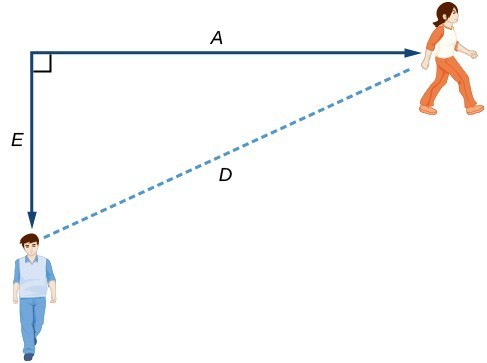 This picture shows us that we can use the Pythagorean Theorem because we have drawn a right triangle.

Using the Pythagorean Theorem, we get:

In this scenario we are considering only positive values of [latex]t[/latex], so our distance D(t) will always be positive. We can simplify this answer to D(t) = 5t. This means that the distance between Anna and Emanuel is also a linear function. Because D is a linear function, we can now answer the question of when the distance between them will reach 2 miles. We will set the output D(t) = 2 and solve for t.

They will fall out of radio contact in 0.4 hours, or 24 minutes.

Should I draw diagrams when given information based on a geometric shape?

Yes. Sketch the figure and label the quantities and unknowns on the sketch.

Example: Using a Diagram to Model Distance between Cities

It might help here to draw a picture of the situation. It would then be helpful to introduce a coordinate system. While we could place the origin anywhere, placing it at Westborough seems convenient. This puts Agritown at coordinates (30, 10), and Eastborough at (20, 0).

Using this point along with the origin, we can find the slope of the line from Westborough to Agritown:

The equation of the road from Westborough to Agritown would be

From this, we can determine the perpendicular road to Eastborough will have slope [latex]m=-3[/latex]. Because the town of Eastborough is at the point (20, 0), we can find the equation:

We can now find the coordinates of the junction of the roads by finding the intersection of these lines. Setting them equal,

The roads intersect at the point (18, 6). Using the distance formula, we can now find the distance from Westborough to the junction.

One nice use of linear models is to take advantage of the fact that the graphs of these functions are lines. This means real-world applications discussing maps need linear functions to model the distances between reference points.