In order to investigate situations such as that of the skateboard manufacturer, we need to recognize that we are dealing with more than one variable and likely more than one equation. A system of linear equations consists of two or more linear equations made up of two or more variables such that all equations in the system are considered simultaneously. To find the unique solution to a system of linear equations, we must find a numerical value for each variable in the system that will satisfy all equations in the system at the same time. Some linear systems may not have a solution and others may have an infinite number of solutions. In order for a linear system to have a unique solution, there must be at least as many equations as there are variables. Even so, this does not guarantee a unique solution.

Another type of system of linear equations is an inconsistent system, which is one in which the equations represent two parallel lines. The lines have the same slope and different y-intercepts. There are no points common to both lines; hence, there is no solution to the system.

Below is a comparison of graphical representations of each type of system. 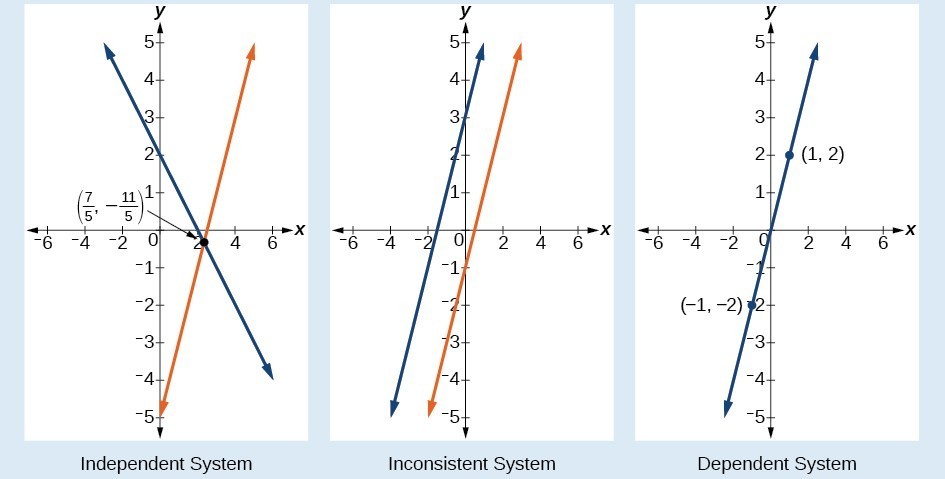 How To: Given a system of linear equations and an ordered pair, determine whether the ordered pair is a solution.

Example: Determining Whether an Ordered Pair Is a Solution to a System of Equations

Determine whether the ordered pair [latex]\left(5,1\right)[/latex] is a solution to the given system of equations.

Substitute the ordered pair [latex]\left(5,1\right)[/latex] into both equations.

The ordered pair [latex]\left(5,1\right)[/latex] satisfies both equations, so it is the solution to the system.

We can see the solution clearly by plotting the graph of each equation. Since the solution is an ordered pair that satisfies both equations, it is a point on both of the lines and thus the point of intersection of the two lines. 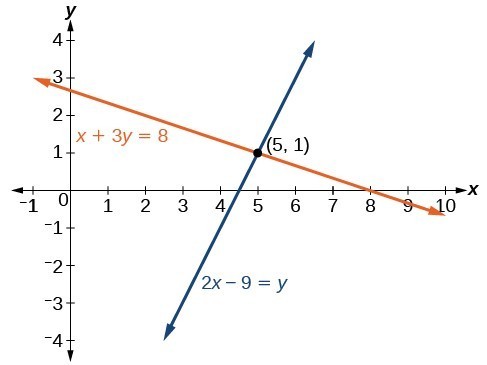 Determine whether the ordered pair [latex]\left(8,5\right)[/latex] is a solution to the following system.

Show Solution
Not a solution.

Solving Systems of Equations by Graphing

Example: Solving a System of Equations in Two Variables by Graphing

Solve the following system of equations by graphing. Identify the type of system.

Solve the first equation for [latex]y[/latex].

Solve the second equation for [latex]y[/latex].

Graph both equations on the same set of axes, use function notation so you can check your solution more easily later.  For example, [latex]f(x)=-2x-8[/latex], and [latex]g(x)=x+1[/latex]

The lines appear to intersect at the point [latex]\left(-3,-2\right)[/latex]. You can check to make sure that this is the solution to the system by substituting the ordered pair into both equations.

This system is independent.

Solve the following system of equations by graphing.

The solution to the system is the ordered pair [latex]\left(-5,3\right)[/latex].

Can graphing be used if the system is inconsistent or dependent?

Plot the three different systems with an online graphing tool. Categorize each solution as either consistent or inconsistent. If the system is consistent determine whether it is dependent or independent. You may find it easier to plot each system individually, then clear out your entries before you plot the next.
1)
[latex]5x-3y = -19[/latex]
[latex]x=2y-1[/latex]