The Evolution of a System

Our own number system, composed of the ten symbols {0,1,2,3,4,5,6,7,8,9} is called the Hindu-Arabic system. This is a base-ten (decimal) system since place values increase by powers of ten. Furthermore, this system is positional, which means that the position of a symbol has bearing on the value of that symbol within the number. For example, the position of the symbol 3 in the number 435,681 gives it a value much greater than the value of the symbol 8 in that same number. We’ll explore base systems more thoroughly later. The development of these ten symbols and their use in a positional system comes to us primarily from India.[1] 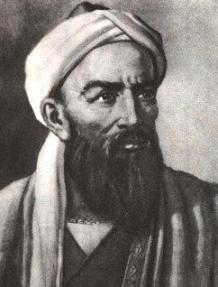 It was not until the fifteenth century that the symbols that we are familiar with today first took form in Europe. However, the history of these numbers and their development goes back hundreds of years. One important source of information on this topic is the writer al-Biruni, whose picture is shown in figure 10.[2] Al-Biruni, who was born in modern day Uzbekistan, had visited India on several occasions and made comments on the Indian number system. When we look at the origins of the numbers that al-Biruni encountered, we have to go back to the third century BCE to explore their origins. It is then that the Brahmi numerals were being used.

These numerals were used all the way up to the fourth century CE, with variations through time and geographic location. For example, in the first century CE, one particular set of Brahmi numerals took on the following form:[4]

From the fourth century on, you can actually trace several different paths that the Brahmi numerals took to get to different points and incarnations. One of those paths led to our current numeral system, and went through what are called the Gupta numerals. The Gupta numerals were prominent during a time ruled by the Gupta dynasty and were spread throughout that empire as they conquered lands during the fourth through sixth centuries. They have the following form:[5]

How the numbers got to their Gupta form is open to considerable debate. Many possible hypotheses have been offered, most of which boil down to two basic types.[6] The first type of hypothesis states that the numerals came from the initial letters of the names of the numbers. This is not uncommon . . . the Greek numerals developed in this manner. The second type of hypothesis states that they were derived from some earlier number system. However, there are other hypotheses that are offered, one of which is by the researcher Ifrah. His theory is that there were originally nine numerals, each represented by a corresponding number of vertical lines. One possibility is this:[7]

Because these symbols would have taken a lot of time to write, they eventually evolved into cursive symbols that could be written more quickly. If we compare these to the Gupta numerals above, we can try to see how that evolutionary process might have taken place, but our imagination would be just about all we would have to depend upon since we do not know exactly how the process unfolded.

The Gupta numerals eventually evolved into another form of numerals called the Nagari numerals, and these continued to evolve until the eleventh century, at which time they looked like this:[8]

Note that by this time, the symbol for 0 has appeared! The Mayans in the Americas had a symbol for zero long before this, however, as we shall see later in the chapter.

These numerals were adopted by the Arabs, most likely in the eighth century during Islamic incursions into the northern part of India.[9] It is believed that the Arabs were instrumental in spreading them to other parts of the world, including Spain (see below).

Other examples of variations up to the eleventh century include:[10]

Finally, figure 14[11] shows various forms of these numerals as they developed and eventually converged to the fifteenth century in Europe. 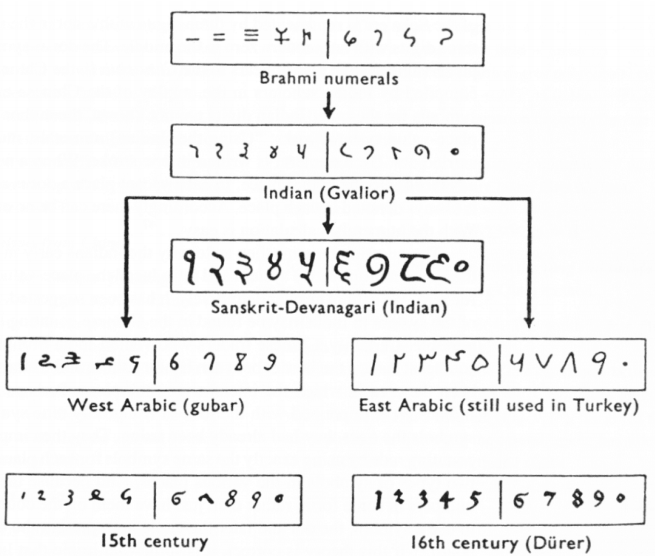 The numeric system represented by Roman numerals originated in ancient Rome (753 BC–476 AD) and remained the usual way of writing numbers throughout Europe well into the Late Middle Ages (generally comprising the 14th and 15th centuries (c. 1301–1500)). Numbers in this system are represented by combinations of letters from the Latin alphabet. Roman numerals, as used today, are based on seven symbols:

The numbers 1 to 10 are usually expressed in Roman numerals as follows:

Numbers are formed by combining symbols and adding the values, so II is two (two ones) and XIII is thirteen (a ten and three ones). Because each numeral has a fixed value rather than representing multiples of ten, one hundred and so on, according to position, there is no need for “place keeping” zeros, as in numbers like 207 or 1066; those numbers are written as CCVII (two hundreds, a five and two ones) and MLXVI (a thousand, a fifty, a ten, a five and a one).

Symbols are placed from left to right in order of value, starting with the largest. However, in a few specific cases, to avoid four characters being repeated in succession (such as IIII or XXXX), subtractive notation is used: as in this table:

Write the Hindu-Arabic numeral for MCMIV.

By the 11th century, Hindu–Arabic numerals had been introduced into Europe from al-Andalus, by way of Arab traders and arithmetic treatises. Roman numerals, however, proved very persistent, remaining in common use in the West well into the 14th and 15th centuries, even in accounting and other business records (where the actual calculations would have been made using an abacus). Replacement by their more convenient “Arabic” equivalents was quite gradual, and Roman numerals are still used today in certain contexts. A few examples of their current use are: