Latasha was a 20-year-old college student who lived in the dorms on campus. Classmates described Latasha as absent-minded and geeky because she didn’t interact with others and rarely, if ever, engaged with classmates or professors in class. She usually raced back to her dorm as soon as classes were over. Latasha primarily stayed in her room, did not appear to have any friends, and had no interest in the events happening on campus. Latasha even asked for special permission to stay on campus when most students went home for Thanksgiving break. 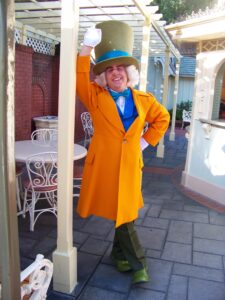 The Mad Hatter, from Alice in Wonderland, appears to be living in a forest that is part of Alice’s dream. He appears to be in his mid-thirties, is Caucasian, and dresses vibrantly. The Mad Hatter climbs on a table, walks across it, and breaks plates and teacups along the way. He is rather protective of Alice; when the guards of the Queen of Hearts come, he hides Alice in a tea kettle. Upon making sure that Alice is safe, Mad Hatter puts her on his hat, after he had shrunk her, and takes her for a walk. While walking, he starts to talk about the Jabberwocky and becomes enraged when Alice tells him that she will not slay the Jabberwocky. Talking to Alice about why she needs to slay the Jabberwocky, the Mad Hatter becomes emotional and tells Alice that she has changed.

The Mad Hatter continues to go to lengths to protect Alice; he throws his hat with her on it across the field, so the Queen of Heart’s guards do not capture her. He lies to the Queen and indicates he has not seen Alice, although she is clearly sitting next to the Queen. He decides to charm the Queen, by telling her that he wants to make her a hat for her rather large head. Once the White Queen regained her land again, the Mad Hatter is happy. 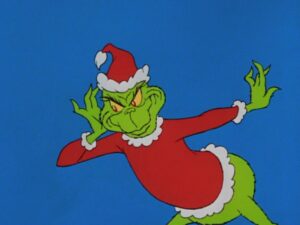 The Grinch, who is a bitter and cave-dwelling creature, lives on the snowy Mount Crumpits, a high mountain north of Whoville. His age is undisclosed, but he looks to be in his 40s and does not have a job. He normally spends a lot of his time alone in his cave. He is often depressed and spends his time avoiding and hating the people of Whoville and their celebration of Christmas. He disregards the feelings of the people, knowingly steals and destroys their property, and finds pleasure in doing so. We do not know his family history, as he was abandoned as a child, but he was taken in by two ladies who raised him with a love for Christmas. He is green and fuzzy, so he stands out among the Whos, and he was often ridiculed for his looks in school. He does not maintain any social relationships with his friends and family. The only social companion the Grinch has is his dog, Max. The Grinch had no goal in his life except to stop Christmas from happening. There is no history of drug or alcohol use.