Convert Between Types of Fractions 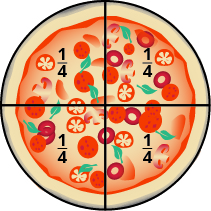 On Wednesday, the family invites some friends over for a pizza dinner. There are a total of [latex]12[/latex] people. If they share the pizza equally, each person would get [latex]\Large{\frac{1}{12}}[/latex] of the pizza. 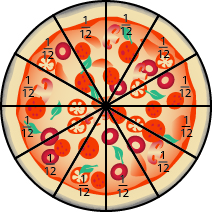 In the image below, the circle has been divided into three parts of equal size. Each part represents [latex]\Large{\frac{1}{3}}[/latex] of the circle. This type of model is called a fraction circle. Other shapes, such as rectangles, can also be used to model fractions.

Watch the following video to see more examples of how to write fractions given a model.

A mixed number consists of a whole number [latex]a[/latex] and a fraction [latex]{\Large\frac{b}{c}}[/latex] where [latex]c\ne 0[/latex]. It is written as follows.

The number [latex]{\Large\frac{8}{5}}[/latex] is called an improper fraction.

Solution:
The denominator of the improper fraction is [latex]8[/latex]. Draw a circle divided into eight pieces and shade all of them. This takes care of eight eighths, but we have [latex]11[/latex] eighths. We must shade three of the eight parts of another circle. 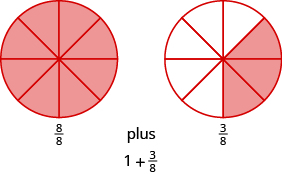 Use a model to rewrite the improper fraction [latex]{\Large\frac{11}{6}}[/latex] as a mixed number. 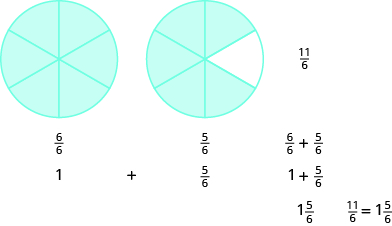 In the next video we show another way to draw a model that represents a fraction.  You will see example of both proper and improper fractions shown.

Use a model to rewrite the mixed number [latex]1{\Large\frac{4}{5}}[/latex] as an improper fraction.

There is another method to turning a mixed number into an improper fraction — it’s just a shortcut to what you’ve been practicing above.